By continuing to use this site, you agree to the use of cookies. Cookies are used to suggest information based on your browsing patterns and to provide us with information about site usage. For more information and to manage these settings, click here
Home > News > LAUNCHING A PRIMARY HEALTH CARE AID PROJECT IN NIGER

“This is the first step along a path we are taking together to improve access to basic social services for the people of Tillabéri in general, and in particular for the most vulnerable people.”These were the words that Soumaila Marsanda, Prefect for the department of Ouallam, used to start the workshop to launch Première Urgence Internationale’s new project in Niger.  This workshop took place on 12th September 2019, in Ouallam in the Tillabéri region. 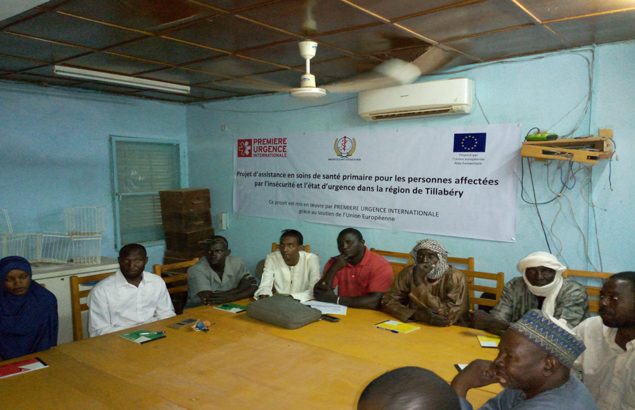 WORKING TOGETHER WITH LOCAL REPRESENTATIVES

This workshop was a key stage for setting the relationship between Première Urgence Internationale and its state partners in stone. The Ouallam Health District’s offices were the meeting place for representatives from several areas: participants included the prefect of Ouallam, the leader of the canton of Tondikwindi, the mayor of Tondikwindi, the heads of six health centres and of six management committees that the project will support. There were also representatives from authorities in the area, responsible for health, social work, land-use planning and community development.

In the first instance, this workshop was a chance for Première Urgence Internationale and its partners to take stock of the work the NGO had carried out in the area. They then worked together to identify recommendations to ensure that the new project would be implemented as effectively as possible.

Première Urgence Internationale and its partners were also able to discuss the security context and where work would take place, as well as what the new project would entail, and its aims.


The aim is to develop a response to the security situation in the border area between Mali, Niger and Burkina Faso, which has deteriorated over the last few months. The situation has severely restricted the civilian population’s access to basic social services. In the Tillabéri region, and particularly in the most northern health areas in the Ouallam district, health centres have limited means, and can no longer guarantee being able to effectively implement advanced strategies[ii] (care provision within a radius of between 5km and 15km from the health centre) and mobile strategies[iii] (care provision for areas more than 15km away from the health centre), as set out in the health development plan. This seriously affects access to care for people living more than 5km away from a health centre.

The decline of socio-economic activity in the area, along with two-wheeled traffic restrictions, has had a negative effect on health centres’ financial capacities. This means that buying and transporting medications needed to care for patients has become a challenge that is very hard to overcome. This affects pregnant women and children under five years old in particular. It has also had severe impact on how effective the system for medical evacuation is – a key element in the fight against mortality in mothers and young babies.

Through the use of a mobile clinic, support will be put in place;

This is how Première Urgence Internationale aims to improve people’s access to quality essential health care. It is also focussing on improving the local capacity to respond to emergencies.

The plan is to roll out this project in six health areas in the district of Ouallam in the Tillabéri region for 12 months.

This project is part of Première Urgence Internationale’s continuing work in Niger. The NGO has been working in the country since the beginning of 2019.

[ii] Advanced strategy: care provision along the same lines but within a radius of between 5km and 15km from the integrated health centre (IHC). For people within this area, accessibility to an IHC is average.

[iii] Mobile strategy: some care provision by IHC staff, supported by the health district or a partner such as Première Urgence Internationale, for areas more than 15km away, accessibility to an IHC being very difficult. This provision is more concerned with work such as vaccinations, antenatal appointments, outpatient surgery, distribution of certain micronutrients (vitamin A, iron) and curative care.