By continuing to use this site, you agree to the use of cookies. Cookies are used to suggest information based on your browsing patterns and to provide us with information about site usage. For more information and to manage these settings, click here
Home > HR news > Jehad Abu Hassan: 10 years of intervention in Gaza

Jehad Abu Hassan has been working with Première Urgence Internationale on its Palestine mission since 2011. Now Field Coordinator for the Gaza Strip, he looks back on his career and shares with us the highlights of his experience during this decade. A period punctuated by several wars. 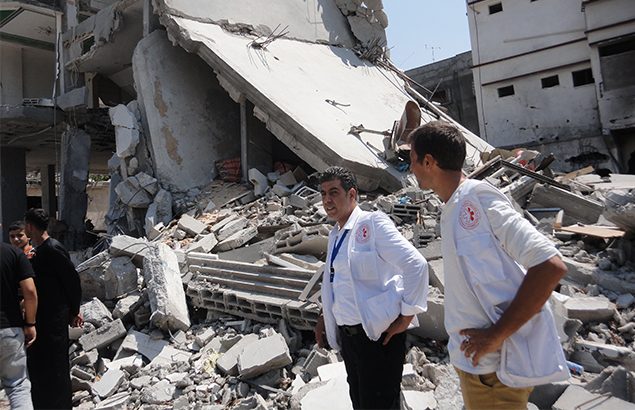 
For as long as he can remember, Jehad has been drawn to the humanitarian field and driven by a desire to help his peers. He describes this choice of path as “innate“.

“Since I was a child, I have liked helping and meeting people. I remember when there were internationals in Gaza, I would go to meet them. Knowing that we can bring a smile, at least for a while, to people in need really moves me“, he says.

His career as a humanitarian in the field began in 2003 in Burundi. He then worked for multiple NGOs in Africa. Due to family and health reasons, he decided to leave the African continent and return to the Middle East.

“In 2009, I still had my contract as Head of Mission but I wanted to go back to Gaza and find a job near my family, this was the most important thing for me. That is when I came across a job offering in Gaza with Première Urgence Internationale. The NGO has allowed me to stay on the same mission for many years, I am very grateful for this flexibility“, he explains.

In-depth knowledge of the context

Jehad returned in 2011 to the Gaza Strip where he grew up, and joined a team of 14 people dedicated to implementing projects in the Access Restricted Areas on sea and land along the barrier with Israel.

This territory is considered a “sensitive area“. The populations, especially the families of herders, farmers and fishers, face particular risks and recurrent violations of their fundamental rights.

“We have remained on the main path which is protection, we have continued to work with farmers and fishermen who are constantly facing violations of international law and human rights. We also work with vulnerable communities, in the field of rehabilitation and construction, as well as food security“, he says.

A new program that stands out is currently being developed: “It is called INTIQAL 2030. It aims to protect and revalue the heritage alongside the youth and is part of a socio-economic development objective of the community,” explains our Field Coordinator. 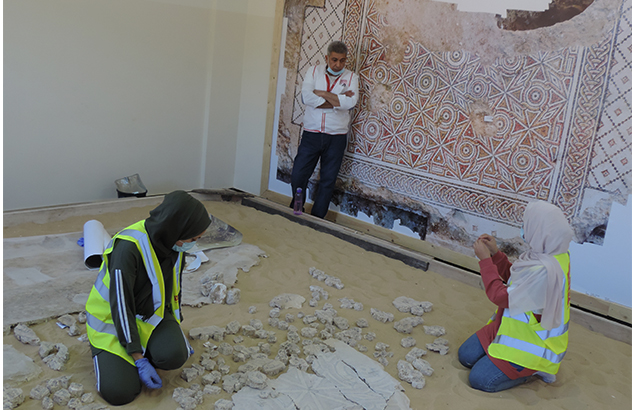 To show “another face of Gaza”

This program implements protective measures on two archaeological sites in the Gaza Strip (the Monastery of St. Hilarion and the Byzantine Church of Jabaliya), the only ones open to the public and both directly affected by the blockade.

In partnership with two universities, the program provides young architects, archaeologists and skilled workers with a series of hands-on trainings on various conservation and archaeological techniques.

A wide range of community-led activities, which attract large numbers of Gazans to the sites, is also organized.

“This work around heritage is really important to me because it shows that there is not only violence in Gaza. This project gives young people a chance to develop their knowledge. It is a treasure to have archaeological sites of this scale. Saint Hilarion is the largest in all of Palestine, and even in the Levant, if we refer to its surface and the architectural remains. It is an opportunity to show the people of Gaza a place that can be accessible to children, a place of cultural development, where we can value and protect our cultural heritage; strengthen the commitment of young people through volunteering, etc.”, he elaborates. 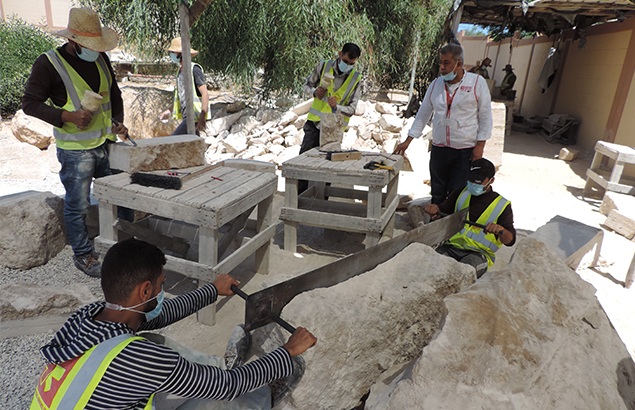 Jehad explains that the added value of Première Urgence Internationale lies in the fact that the human being is at the center of its actions and that transparency is the key word: “There is a respect for the communities we support, the most important thing for us is their protection and well-being. We have a strong bond with them and it is crucial to show that we are there when it is urgent and that we do our best. Even if the help we provide is not huge in terms of volume, it comes at the right time and is therefore hugely appreciated by the local community.”

In the future, our Field Coordinator hopes to see the situation improve and intends to stay on site to continue developing projects to support the most vulnerable populations.

“I am very happy to work with Première Urgence Internationale because it is a flexible organization and has given me great support. I like my work very much, even if the fundraising and the rest is sometimes difficult, we manage to do it. I would like to continue to develop our work in Gaza. I don’t see myself going anywhere else, I find that there is a lot to do here and that my presence is as important as anywhere else“, he concludes. 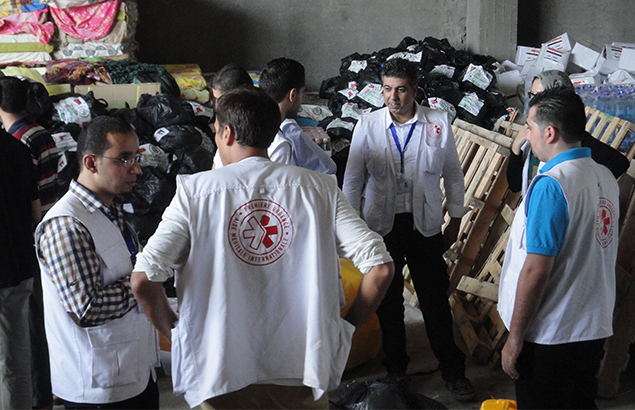 “Today we are talking about a 53% poverty rate. We are not far, according to the World Bank, from 60% unemployment rate. With the COVID-19 pandemic in 2020, the most affected are the daily workers. The financial crisis and the measures that were taken by the Palestinian National Authority in March 2017 have also had an impact, analyzes Jehad Abu Hassan, he adds, “So unfortunately there are no improvements. Gaza is still under blockade so the Israeli government can entirely close the accesses at any time under the pretext of security or escalating violence.”

The recurrent power cuts and lack of fuel supply, if the commercial crossings are closed, impact all residents and businesses in the area.

“The sky, land and sea are in the hands of the Israeli authorities, so in the end it is like an open-air prison“, he says.

The crossings to move out of Gaza are sometimes only open a few days a week with long queues and few permits issued.

For a change of scenery, the Gaza team sometimes retreats to “cottages” close to the sea, but the desire to reset the meter and take breaks in other countries remains strong.

“We would like to go to Egypt, or to the West Bank… We were able to do that once but we could not get permits for all the staff in Gaza. The situation is difficult, so I try to be flexible and listen to the teams.“

Nevertheless, projects such as the one related to heritage preservation, offer hope and a window of opportunity into the future…

The programme INTIQAL 2030 is funded by the British Council’s Cultural Protection Fund, in partnership with the Department for Digital, Culture, Media and Sport; the ALIPH Foundation and the Agence Française de Development (AFD).

Read our statement following the ceasefire.

Learn about the intentional pollution of the West Bank by Israeli settlements.

“Prior Coordination Area”: a common strategy for Israeli settlers to force Palestinians off their land

[Infographics] In the West Bank, Première Urgence Internationale continues setting up protection activities, to defend the rights of Palestinians. In spite of the COVID-19 pandemic, Israeli settlers’ violence keeps increasing in the Occupied Palestinian territory. This is part of a common strategy of illegal appropriation of land: see our explanatory comic strip.