By continuing to use this site, you agree to the use of cookies. Cookies are used to suggest information based on your browsing patterns and to provide us with information about site usage. For more information and to manage these settings, click here
Home > News > INTERVIEW WITH AFRICAN HEALTH ADVISOR, MARIE-MICHÈLE, ON HER RETURN FROM A VISIT TO THE DRC

INTERVIEW WITH AFRICAN HEALTH ADVISOR, MARIE-MICHÈLE, ON HER RETURN FROM A VISIT TO THE DRC

The DRC is a country with significant resources. Since 2001, the country has been recovering from a series of conflicts that broke out in the 1990s and the consequences of a prolonged economic and social slump. The UN estimates that the number of internally displaced persons in October 2016 in the DRC stands at 1.7 million and the number of refugees is more than 400,000. 4.5 million people are in a situation of food insecurity and have been deprived completely or partially of their livelihoods.

In this context, the needs of the population are considerable, which is why Première Urgence Internationale has been working in the country for more than 15 years with the most vulnerable populations; children under 5 and pregnant women. The organization is currently active in four zones: Tanganyika, North Kivu, South Oubangui and Kinshasa to promote access to primary health care, nutritional care, supply and availability of essential medicines and the transfer of complicated cases to the referred medical facilities. According to the regions, the presence of Première Urgence Internationale varies according to the needs of the population.

Following her visit, Marie-Michèle explains the medical activities currently carried out by Première Urgence Internationale in the country. 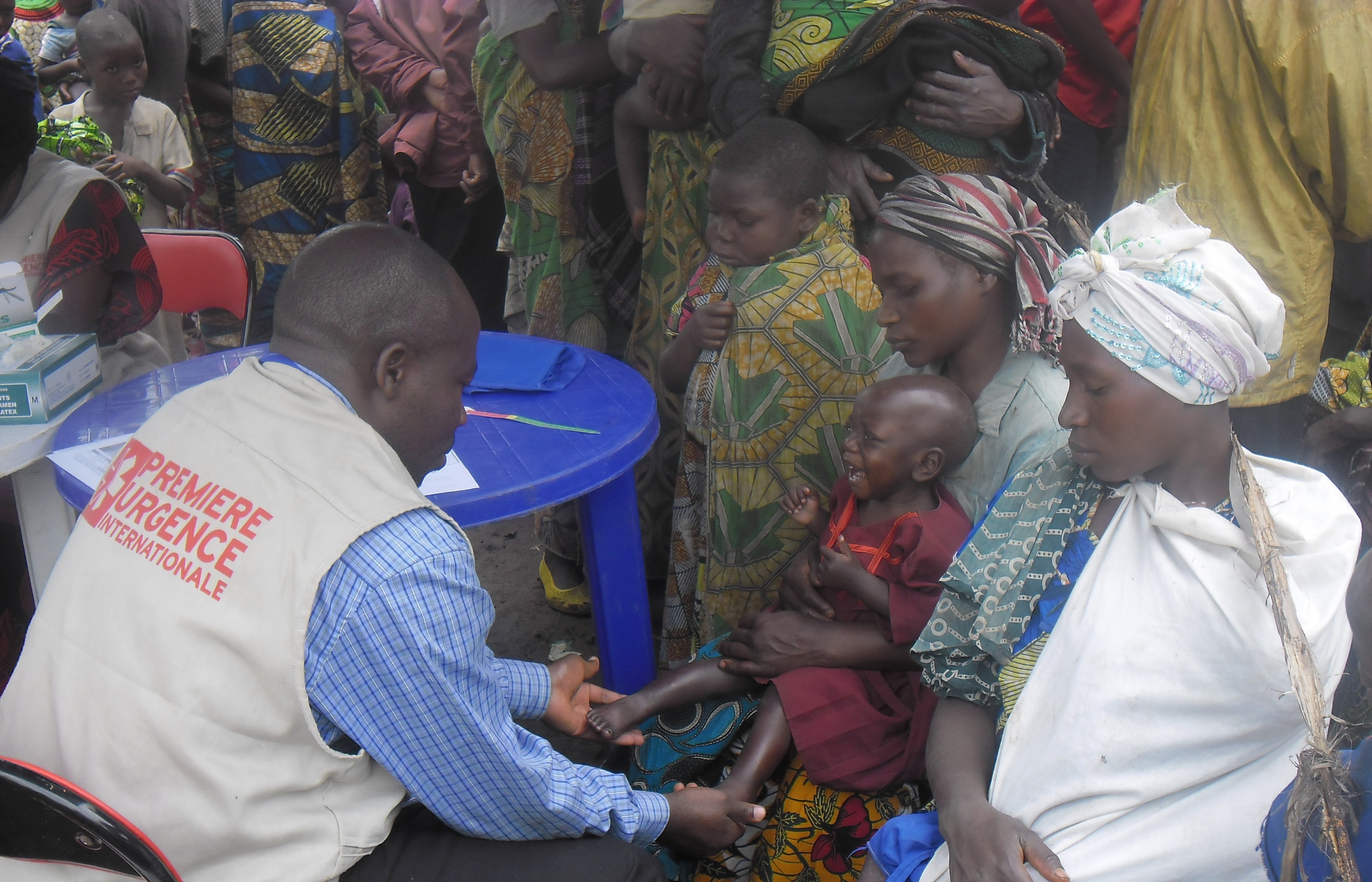 In Tanganyika and North Kivu, the organization works with mobile clinics to facilitate people’s physical and geographical access to health care. These clinics provide primary health care to those in need – management of common illnesses (malaria, respiratory infections, skin diseases), vaccinations, pregnancy monitoring, management of acute malnutrition and identification and Psychosocial care for victims of sexual violence.  At the same time, the Première Urgence Internationale teams give support to the health centers in these regions for the management of acute malnutrition. Actions taken in these health centers are relatively similar with support through the distribution of inputs for acute malnutrition, provision of medicines (free of charge for pregnant women and children under 5 years of age), rehabilitation and training.

Finally, support is also given to referral hospitals to help strengthen the management of severe cases of pediatric (including complicated cases of malnutrition) and maternity cases referred by mobile clinics or other health facilities. This support consists of the provision of support staff (doctors, midwives, nurses, nutritional assistants), improvement of the hospitalization capacity (provision of beds), supply of essential medicines, equipment and medical equipment, the restoration of waste disposal areas. A significant part of this intervention is the regular organization, with the local health authorities, of in-service training sessions for the nursing staff.

One of the main challenges for our teams is the volatile security situation which has caused many relocations. The health situation, in addition to being precarious, is punctuated by repeated epidemics that take on an endemic  character (measles, malaria). To this we must add the logistical barrier in terms of relocation of teams and difficulties in supplying quality equipment and medicines.

All this requires the team to regularly adapt its response strategy. Responding as best it can to the emergency, while taking into account these recurring epidemics, is the main challenge faced by our teams in the field.

Première Urgence Internationale also develops health interventions in Kinshasa and in the province of South Oubangui. In Kinshasa, where population density is very high and the population is very poor, our team works in 5 health centers in the N’Gaba area, with awareness-raising activities on sexual reproductive health (SRH) and HIV / AIDS for the adolescent population. These activities take place both in the health facilities supported by our teams and in the community via a network of community workers (called community relays) that disseminate information to the population. Finally, in South Oubangui a new project in the health zones of Zongo and Libengue supports the management of acute malnutrition at the level of the health centers and the community. Community-based activities are carried out through screening, awareness-raising and prevention of malnutrition thanks to trained staff and existing community networks. This response is complemented by the strengthening of capacities of epidemiological surveillance and the response of local health authorities (setting up sentinel sites, training, support for data transmission, pre-positioning of a kit against cholera). In this country of important natural resources, the malnutrition that strikes the population constitutes “a real contrast” concludes Marie-Michèle.