By continuing to use this site, you agree to the use of cookies. Cookies are used to suggest information based on your browsing patterns and to provide us with information about site usage. For more information and to manage these settings, click here
Home > News > In West Bank – Violence by Israeli settlers against Palestinians is rising at a straggering rate 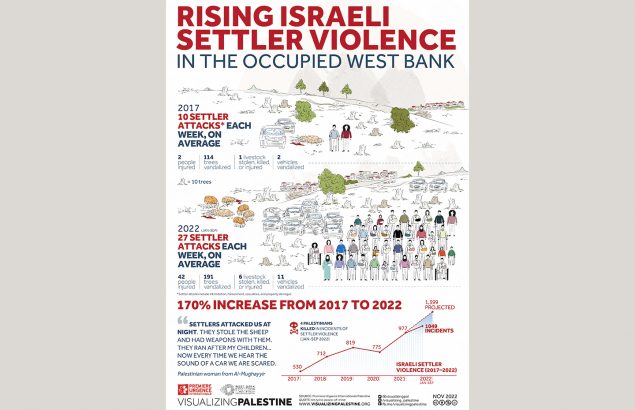 This is what life is like in the West Bank under Israeli military occupation. Property damage, intimidation and harassment, casualties…

Israeli settlers committed at least 1,049 attacks against Palestinians in the occupied West Bank between January and September 2022.

Settlers live on land stolen from Palestinians under Israeli military occupation. The intention of these attacks is closely aligned with official policies of the Israeli government: to coerce Palestinian communities into leaving their homes in order to take over even more land and resources resulting in de facto annexing parts of the West Bank.

In 2022, far more Palestinians have been killed and injured by Israeli soldiers as part of Israeli settler violent attacks.

For Palestinians, it is impossible to separate the violence they experience at the hands of the Israeli state from violence perpetrated by Israeli settlers. Israeli authorities not only fail to stop settler attacks, but enable them.

Here’s how it works:

We call on Third states and international organisations to

1/ Adopt all available means to ensure that Israel’s complies with its obligations under international law.

2/ Monitor trends—and support the monitoring efforts of others—relating to settler violence and report on this phenomenon in the relevant fora, including Special Reports to the United Nations Security Council.

3/ Call upon Israel to cease its policy of leniency; and to exercise due diligence through the effective prevention, protection, investigation, prosecution, sanction, and remedy for settler- related violence.

4/ Insist that investigations into settler violence are consistent with international policing standards; and be adequate, prompt, thorough, impartial and independent, with sufficient public scrutiny to ensure meaningful accountability.

Read the infographics in English

Also read: In the West Bank and Gaza Strip, the population is facing the 55th year of israeli occupation