By continuing to use this site, you agree to the use of cookies. Cookies are used to suggest information based on your browsing patterns and to provide us with information about site usage. For more information and to manage these settings, click here
Home > News > Central African Republic: In Ndele, Global Handwashing Day was celebrated with demonstrations

The Global Handwashing Day (October 15) was celebrated in the village of Adoumindou, located 7km from Ndélé in the Bamingui-Bangoran prefecture. It is one of the villages that benefited from the family latrines of the Iboungbi project (multisectoral development in the North-East of CAR): 60 latrines were built there.

This year’s global theme was “the power is in our hands”.

The Global Handwashing Day ceremony lasted all day. First, the village chief of Adoumindou gave a speech thanking Première Urgence Internationale and urging the community to listen to the awareness messages. PUI’s Field Coordinator then reminded the audience of the importance of handwashing at key moments (after going to the toilet, after cleaning a child, before preparing food and eating, after feeding a child). The simple act of hand washing can save lives and reduce the number of missed school days for children. The Prefect of Bamingui-Bangoran also reminded the audience of the importance of hand washing and thanked PUI at the beginning of the ceremony.

37 leaders were present (29 men and 8 women). Among them, the prefect of Bamingui-Bangoran, the sultan-mayor of the town of Ndélé, the representative of the Bamingui-Bangoran Health District, village chiefs, women’s representatives, youth, religious leaders from Adoumindou and the villages of Kotissako, Kaka and Bissingou, had made the trip. The travel of the village chiefs near Adoumindou had been facilitated by Première Urgence Internationale, so that they could attend the celebration and then spread the message to their communities.

After the speeches, the theater company The Parrots of Bamingui-Bangoran gave an awareness skit. The skit featured a child who learned about hygiene at school. Once back home, he sees that his father does not wash his hands at key moments and makes him notice. His father does not understand the importance of the message, so the child provokes a discussion between him, his mother and the village chief.

This show was very much appreciated by the audience; they found it a light and funny way to get the hygiene messages across.

The community mobilizers from Première Urgence Internationale then recalled the key messages of handwashing and demonstrated how to do it as recommended by the World Health Organization (handwashing with soap and water, in a circular fashion, etc.)[1].

Following the demonstration, the PUI team launched a quiz with questions such as:

Testimony of a participant

Elisabeth is 25 years old and came to attend the activity; with her seventeen-months old daughter Stephanie. Elisabeth has 5 children in total and lives in the village of Adoumindou. She participated in the game to win a kit.

“I was asked the question: why do you need to wash your hands with soap? I answered: to avoid diseases. It was a good answer so I received my WASH kit as a reward! I understood the awareness messages given by the NGO and by the company the Parrots of Bamingui-Bangoran. I will use my kit wisely; to implement good hand washing practices and store clean water. I really enjoyed the activity and I am very happy that I won! Thank you very much to the NGO Première Urgence Internationale.” 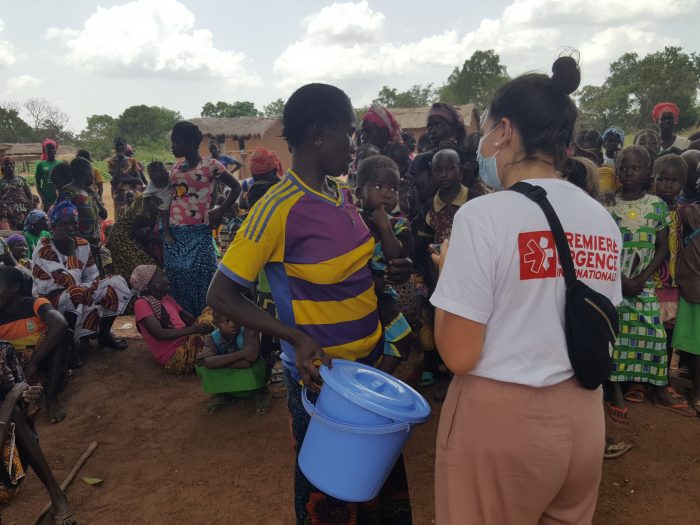 The celebration of the day ended in a nice note with a speech by the prefect of Bamingui Bangoran.

In general, this celebration was a success. The Global Handwashing Day is a good opportunity to recall the importance of this gesture; in the reduction of waterborne diseases and mortality.

The Iboungbi project is funded by the French Development Agency.