By continuing to use this site, you agree to the use of cookies. Cookies are used to suggest information based on your browsing patterns and to provide us with information about site usage. For more information and to manage these settings, click here
Home > News > In Ukraine, 7 years of silent war

In Ukraine, 7 years of silent war

For almost seven years, a war has been fought in silence at the gates of Europe. In the east of the country, particularly in Donbas province, hostilities continue daily. Infrastructure is damaged, and health services destroyed. To support civilians, Première Urgence Internationale intervenes in several villages and provides material support. 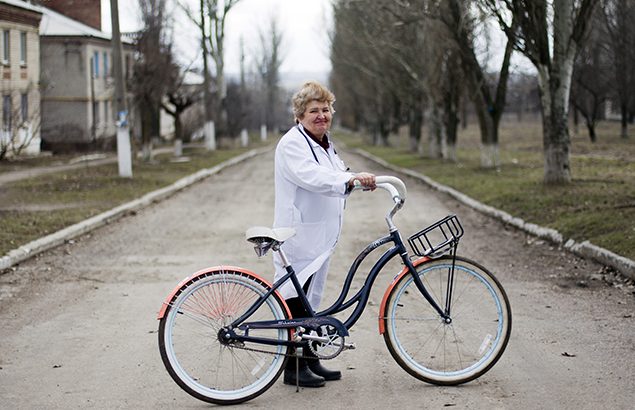 Krasnohorivka is a small village located 5 km from the contact line in Eastern Ukraine. With about 300 inhabitants, this village looks like any other village of the Donbass region, situated in a very close proximity to the forgotten conflict. Small houses and huts, solitary streets and stray dogs wandering around.

At first sight, nothing in the village attracts the traveler’s attention. On approaching the centre, the sense of tension and feeling of hostilities, still raging on a few kilometers away, is given away by a ruined two-storied building, several shell craters in the ground, military cars coming and going, children peeping out of the windows of the nearby houses at newcomers.

In February 2020, Première Urgence Internationale’s team visited the village in order to speak to Tetyana, a local nurse, and to learn more about how the village has been coping with the consequences of the conflict in Eastern Ukraine that broke out in the spring of 2014. 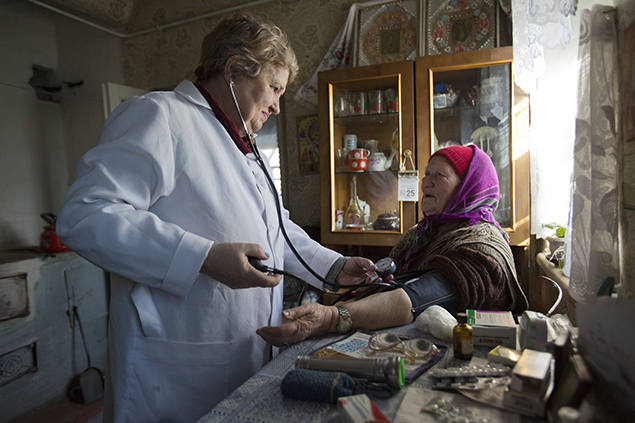 Dr. Tatyana Kirpichenkova measures the blood pressure of an elderly woman, Maria Olshannikova, in her house in the village of Krasnogorovka, near the front line, Donetsk region, Ukraine, February 25, 2020. © 2020 European Union

According to Tetyana, when the conflict started those who had money or relatives elsewhere fled the village to seek a better life in the bigger cities of Ukraine: Kyiv, Kharkiv, Dnipro, etc. Those who stayed did not have any opportunity to leave. The village was badly affected during the initial stages of the conflict back in 2014-2016. The local clinic was hit by the shelling and the houses of some inhabitants were significantly damaged.

Tetyana, now in her early sixties, is a very energetic woman. She has been working as a nurse for almost 40 years now. With the clinic destroyed, Tetyana receives some of her patients in a building of the local village council. People seek not only medical help from her, but also consolation and advice in these difficult times.

Apart from that, every day Tetyana pays visits to those inhabitants of Krasnohorivka who need her attention most – the bed-ridden, the elderly, the sick… Without a car or any other means of transport at her disposal, Tetyana had had to attend to them in any weather and under any circumstances, which had put a strain on her physical capacity.

“They call me their guardian angel” – Tetyana, local nurse

Within the framework of the project (funded by the EU Civil Protection & Humanitarian Aid) aimed at providing help to the population affected by the conflict, Première Urgence Internationale provided Krasnohorivka with medical supplies, equipment and consumable goods in 2019. Among other things, our team also gave Tetyana a bicycle. She says it has helped her to considerably reduce the time she usually spends on reaching her patient’s homes, at the same time doing some physical exercises while spinning the pedals of the bike!

Tetyana does not seem to be losing hope under such dire circumstances, brought about by the forgotten conflict in Europe. The nurse shares with our team memories of how the locals thank her for her help. “They sometimes call me their savior, their guardian angel”, says Tetyana.

The nurse from Krasnohorivka has set herself an ambitious goal – to work as a nurse until she reaches the age of 80. “People need me, and I need them” -, says Tetyana with a wide heartwarming smile on her face.

The conflict in Eastern Ukraine is now entering into its 7th year. A silent war has been taking place at Europe’s doors since 2014. In Ukraine, and more specifically in the Donbass in the east of the country, conflict has made the civilian population extremely vulnerable. The hostilities keep taking place on a daily basis, exerting a devastating impact on objects of essential infrastructure and ordinary people’s lives.