By continuing to use this site, you agree to the use of cookies. Cookies are used to suggest information based on your browsing patterns and to provide us with information about site usage. For more information and to manage these settings, click here
Home > News > Uninterrupted Israeli human rights violations increase Palestinians vulnerability to COVID-19 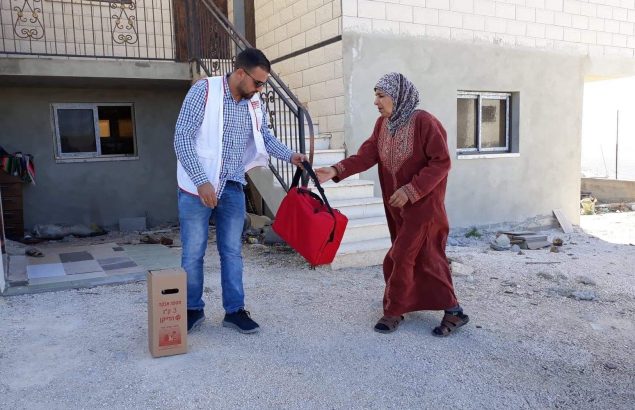 The COVID-19 in the occupied Palestinian territory

On February 21, the first case of COVID-19 was diagnosed in Israel; two weeks later, the first case emerged in the occupied Palestinian territory. According to the World Health Organisation, as of April 5, a total of 8,018 cases were reported in Israel and 227 cases in the occupied Palestinian territory (oPt). Shortly afterwards, both Israeli and Palestinian Prime Ministers imposed strict regulations on their respective citizens, limiting movements to a minimum and encouraging people to isolate themselves at home.

However, Israeli military operations in the West Bank—including raids, home demolitions, arrests and detention, and land confiscation—have continued, exposing the affected Palestinians to a greater risk of contamination. In parallel, settler violence against Palestinians, which has been increasing in the last years, is now peaking, as settlers take advantage of the restrictions to step up their violence against Palestinians and their property and seize more Palestinian land.

Under international law, the Israeli authorities are responsible for the wellbeing of Palestinians under military occupation. Past reports and documentation have shown that the Israeli authorities systematically and institutionally violate this duty, and have been denying basic rights to the entire Palestinian population for several decades. This systematic oppression and blatant disregard of international law is particularly worrying as it goes on unabated even during the current pandemic, increasing the risk of infections for Palestinians, but also ultimately Israelis.

Settler violence has increased dramatically in intensity and severity following the outbreak of the pandemic. Whereas Israeli citizens within Israel are subjected to strict regulations and movement restrictions, Israeli settlers residing illegally in the Palestinian West Bank are not monitored by the Israeli authorities, and are taking advantage of the self-confinement of Palestinians to increase their violence and land seizures.

In the last week of March alone, settlers razed private Palestinian land in three different areas of the West Bank, in order to build roads to their settlements or outposts. Moreover, several humanitarian and protection agencies have had to stop or limit the scope of their work on the ground in order to limit the spread of the virus; with no protective presence mechanisms in place, settlers have a freer hand to attack Palestinians and their property.

Since a State of Emergency was declared on March 5, there has been at least 16 settler attacks that resulted in Palestinian injuries and property damage—a 78% increase compared to the bi-weekly average of attacks since the beginning of the year. Groups of settlers have been recorded using weapons and trained dogs against Palestinians, leading to serious injuries. Several Palestinian communities, such as Al Twani and Burqa, have been raided by large groups of settlers, who attacked farmers, stoned vehicles, uprooted trees and vandalized structures. Several Palestinian media reports have shown other instances where settlers were observed spraying unknown substances on Palestinian vehicles, door locks, and ATMs, instilling fear and paranoia in the affected Palestinian communities.

In parallel, Israeli security forces have continued their operations targeting Palestinians throughout the oPt, even when those are directly contributing to an increased risk of infection. Army raids in Palestinian communities, which include arrests and detentions of Palestinians, are still ongoing daily; between March 6 and 31, a total of 207 incursions by the Israeli army were reported in Palestinian cities in the West Bank and in East Jerusalem. Media reports that several Israeli prison personnel, including an interrogator, have been diagnosed positive with the virus also raise serious concerns that Palestinian prisoners in Israeli jails aren’t protected from exposure to the virus. One Palestinian prisoner released from an Israeli prison on March 31 was tested positive one day later, raising fears that he might have contaminated dozens of other inmates.

Adding obstacles to the fight against the virus

In other instances, Israeli security forces have cracked down on Palestinian-led efforts to combat the spread of the virus. For instance, on March 30, Israeli forces stormed the headquarters of the public emergency committees in the village of Hizma, assaulting volunteers and preventing them from conducting awareness-raising activities. In other incidents, Israeli forces have arrested Palestinian volunteers that were spraying disinfectants in Palestinian areas and communities.

Finally, the demolition of Palestinian infrastructure by the Israeli Security Forces—a regular occurrence, despite being illegal under the Fourth Geneva Convention—has not stopped; in March alone, at least 40 Palestinian structures were demolished, displacing 31 people, including 13 children. Such demolitions are even more concerning under the current pandemic, with the affected families rendered homeless or forced to move in with relatives, thereby increasing their risk of exposure to the virus.

In some cases, the Israeli Security Forces have demolished or confiscated material and infrastructure used to combat the virus. For instance, in the Bedouin community of Ibziq in the Jordan Valley, on March 26, the Israeli army confiscated six back sprayers provided by Première Urgence Internationale that would have been used to spray disinfectant and four tents that had also been provided by the humanitarian community as clinics.

COVID-19 in the Gaza Strip: a ticking time bomb

While so far only 12 cases of COVID-19 have been reported in the Gaza Strip, the current humanitarian crisis in the Strip, including its ailing health sector, raises the very real risk that the pandemic will spread rapidly and overload Gaza’s poorly-equipped hospitals, creating a catastrophic scenario for the Gaza Strip’s impoverished population.

For several years, health and humanitarian experts have warned that Israel’s blockade of the Strip, now in its 13th year, have left the health sector close to collapsing and unable to deal with a pandemic. Chronic shortage of medicine and health equipment have left hospitals and doctors unable to deal with a severe crisis, let alone a pandemic. There are currently 62 respirators, 70 intensive care beds and 2,895 beds in the Gaza Strip—for a population of over two million. According to Special Coordinator for the Middle East Peace Process Nickolay Mladenov, as of February 2020, 39% of the Gaza Strip’s essential medicine was depleted.

Despite the low number of cases currently reported in the Gaza Strip, additional expenses linked to the pandemic exacerbate the already dire socioeconomic situation of the most vulnerable households in the Strip. Première Urgence Internationale field teams have been providing emergency cash assistance to vulnerable households before the pandemic. The feedbacks received from families that live under the poverty line and with high food insecurity levels highlight that they are now forced to incur extra expenses, such as disinfectants and detergent, leaving them unable to meet their basic needs, including food.

The Israeli government must comply with its obligations under international law

As the Occupying Power, in order to stem the spread of the pandemic within the Palestinian population—and ultimately the Israeli population, due to the frequent contacts between Israelis and Palestinians, the Israeli authorities must: