By continuing to use this site, you agree to the use of cookies. Cookies are used to suggest information based on your browsing patterns and to provide us with information about site usage. For more information and to manage these settings, click here
Home > News > In the DRC, the Ebola outbreak isn’t over: we continue our response

In the DRC, the Ebola outbreak isn’t over: we continue our response

While the whole world is facing the COVID-19 pandemic, the Democratic Republic of Congo (DRC) is still fighting against another deadly epidemic. Just before it should have been declared officially ended on the 12th of April, a new fatality was attributed to the Ebola virus disease on the 9th of April, proving that this 20-month outbreak has not been overcome yet. Première Urgence Internationale keeps working on prevention and awareness activities, to mitigate the spread of the Ebola virus and fight against this deadly disease.

Since 1 August 2018, the Democratic Republic of Congo (DRC) is facing the 10th outbreak of the Ebola virus disease on its territory. For the first time, the epidemic reached an area affected by armed conflicts. The Ebola virus is highly lethal – 2 out of 3 sick people succumb -, and belongs to the large family of haemorrhagic fevers. It kills in only 10 to 15 days without appropriate treatment. In a year and a half, more than 2,200 ill people died.

This deadly outbreak is still active today, whereas the COVID-19 virus has recently appeared in DRC, and as the country is also facing, in parallel, two other major health scourges: malaria and measles.

Stopping the spread and raise awareness

Première Urgence Internationale has been intervening in the DRC since 2001 and participates in the disease response plan. The NGO already had deployed a similar program for the Ebola outbreak in Guinea, in 2015-2016. Since February 2019, Première Urgence Internationale opened a base in the North-Kivu, Eastern DRC, and set up a dedicated program with a team of around 70 people, in an area and a country already well known.

In cooperation with other health actors, including the World Health Organization (WHO), Première Urgence Internationale has been leading, for 11 months and again until late August 2020, a program of prevention and control of infections, in 24 healthcare centers and alongside 40 traditional doctors. This program is being led in the city of Goma, with a financial support from OFDA (1).

This disease response program aims at both interrupting virus transmission (especially avoiding contamination of healthcare workers) and sensitizing communities to maintain, or restore, people’s confidence in the healthcare system. Therefore allowing a faster and earlier detection of the virus, while maintaining a successful monitoring of other pathologies.

“When the outbreak declared in the East of the DRC in August 2018, we identified that in Goma, the biggest city of the region, healthcare facilities were not ready to cope with an epidemic. Yet, Goma has a high density of population and concentrates many exchanges with the areas that were already affected by the virus, such as Béni, Butembo and Katwa. Goma is also an international platform, in the border area with Rwanda, and hosting an international airport. An outbreak reaching Goma would be a catastrophe!” Frida Bonou-Zin sums up, in charge of the disease response program for Première Urgence Internationale.

“We then decided to act to prevent the spread of the epidemic, at community level and at health facilities level. Access to water was a major issue in Goma, so we connected the health facilities to the city water network and installed water tanks and rainwater collection systems. We also trained 40 traditional doctors and 150 focal points”, Frida Bonou-Zin details. “This was a key element for us and our strategy, because the population was afraid of Ebola virus consequences. Many people refused to declare themselves if they were having symptoms. Community focal points helped us to detect suspected cases, and went to the sick families to raise awareness and inform them. Thanks to their support, we worked at dismantling rumours and misinformation that were circulating in Goma, and at increasing awareness of the virus threat. Now, communities are vigilant and better informed. Suspected cases alerts are arriving faster, and we see some households equipping themselves with hand washing facilities and devices.”

On 17 July 2019, the Ebola virus has reached Goma, a virus-free area until then. “The detection of this first case, in a healthcare centre supported by Première Urgence Internationale, illustrates the relevance of our positioning and highlights, as well, the risk that the Ebola virus disease continues spreading in the region. Vigilance is required”, Anne-Gaëlle Bril warned, responsible for the African missions at that date.

There followed a 24-day period of monitoring (corresponding to the incubation period of the virus) for the disease response program team. “Every morning and evening, we had to check our own temperature, with fear”, said Faustin Chikuru Chabwene, working as a nurse in Goma’s Afia Himbi health facility, where the first Ebola case had been detected. “Luckily, thanks to the protection equipment and the training we got with Première Urgence Internationale, no other person was contaminated in the facility, neither in our families. The sick man, first confirmed case in Goma, died after two days.”

After 21 days, no other case was reported in this healthcare centre. During the second half of July 2019, three other Ebola virus diseases cases were diagnosed in Goma. But none of them propagated.  The spread of the virus in Goma has been stopped and controlled.

Across the following weeks, the epidemic threat reduces, and prevention programs return to normal functioning. Première Urgence Internationale teams observe from less to less rumours among the communities. “We noticed an increase in the number of consultations in our healthcare centres. This proves people’s confidence towards our structures”, highlights Elodie Kavira Mukirania, nurse in Saint Luc medical centre, in Goma. “We were able to treat and limit several nosocomial infections, and to improve our diagnosis and early alert capacities with suspected Ebola cases. This is a powerful ability, in this area where community resistance was quite strong.” 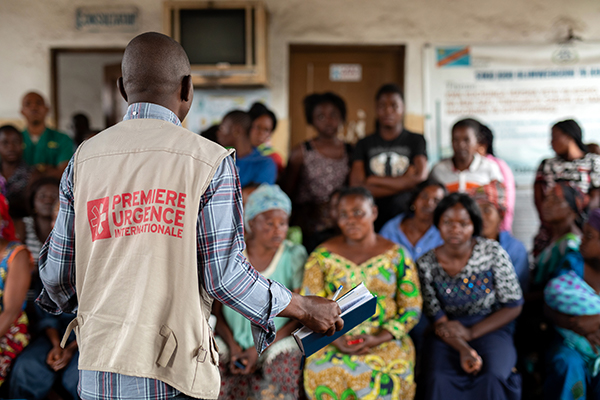 Month after month, the spread of the virus slows down in the whole Nord-Kivu, especially in the Northern provinces and the cities of Beni and Butembo, the most severely affected. Between 17 February and 8 April 2020, no new case of Ebola virus disease was reported in the DRC. But on the 9th of April, a new fatality is attributed to the Ebola virus disease. This occurred only 3 days before the WHO could declare the official end to the outbreak, and whereas the COVID-19 virus had just appeared in the country. The sick man, aged 26 years old, dies on the same day.

This new confirmed case is shifting the health response to another active phase: in total, 6 confirmed cases of Ebola virus disease have been registered in two weeks (among which 4 deaths). A resurgence that confirms, again, the relevance of prevention and awareness activities, to mitigate the consequences of this deadly virus, which still has to be overcome. In the DRC, the response against Ebola is still ongoing.

Première Urgence Internationale teams continue their work of prevention and control, for several months again, in order to keep a high awareness, limit the reminiscence of the virus in the area, and contribute to reinforce the healthcare system, a crucial element for all disease responses. In the long-term, we hope it would help reduce the vulnerabilities of populations in the region.

All the activities deployed in the frame of this prevention program will be and already are useful in the frame of the new response to the COVID-19 outbreak (5 cases have been reported in Goma in the past days).

(1) All these activities were funded thanks to the support from the United States and the American people (USAID-OFDA).