By continuing to use this site, you agree to the use of cookies. Cookies are used to suggest information based on your browsing patterns and to provide us with information about site usage. For more information and to manage these settings, click here
Home > News > Humanitarian’s words in Colombia

In December 2021, journalist Jean-Paul Mari follows Route 55, which many Venezuelans take on foot to reach Colombia. Since 2014, 6 million Venezuelans have left their country. The Première Urgence Internationale teams are mobilizing to meet their needs. 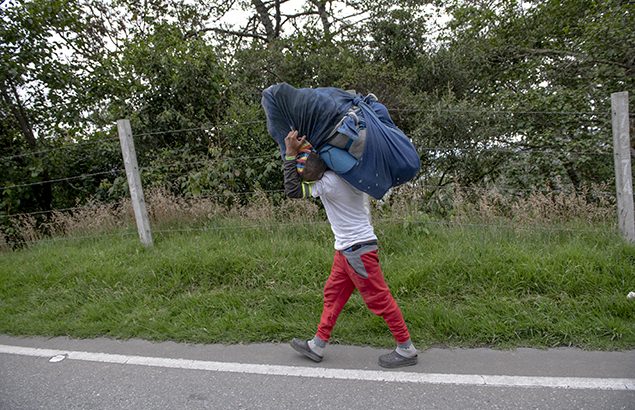 They are there, present, from the beginning to the end of the chain, from the passage through the Rio of the Venezuelan border, to the stages in the interior of Colombia, on the long path that leads the migrants to Bogota and the south of the country. The humanitarians of , Première Urgence Internationale, cannot be satisfied with just providing medical care, blankets, clothes for the children, mothers and elders, or psychological counseling. They have to do everything at once. A family thrown on the road arrives with multiple needs, old or recent sufferings, pain in the body, pain in the soul, pain everywhere.

All along the way, the humanitarians have set up emergency and help points, the most adapted to the stage. It all starts with the first contact, the emergency, and continues hundreds of kilometers further by assisting those who arrive, in tatters, and must continue the road, towards the south of the country, often in Ecuador, in Peru, and up to Santiago, the capital of Chile, thousands of kilometers away from their village of departure. Thousands of kilometers on foot, in the heat or the cold of the mountains, with hunger, thirst, tiredness, risks of aggression …

Caring for the bodies.

On the road. Diana, 30, a nurse, is part of the mobile team. From Arauquita to Saravena, she sees the arrival of sick or wounded migrants, undocumented migrants who only carry the Venezuelan ID »carnet de la Patria ». They arrive in Colombia after having walked from the four corners of Venezuela, sometimes after six or seven days of walking, with their families, old men overwhelmed or pregnant women pulling their children by the hand. The kids are malnourished, living on one bad meal a day, suffering from diarrhea and foot infections because of the forced march. Diana remembers one woman, eight months pregnant, who came all the way to Colombia to give birth. Her other two pregnancies in Venezuela ended in the death of the babies.

With each intervention on the road, Diana has to fight against all the evils of misery and the road. Children’s parasites, dysentery, malnutrition, poorly treated Covid, lack of vaccines, injuries, exhaustion… Diana and the team provide first aid, referrals to hospitals, medicine and medical and psychoeducational advice. And the migrants leave. Leaving the place to those who arrive, there, at the end of the road. 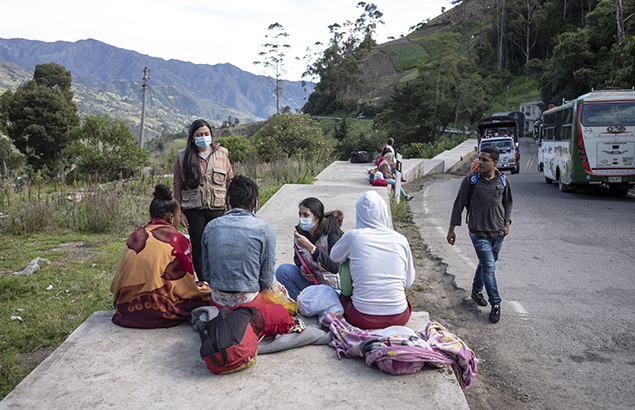 To the hospital. Carlos Alberto, 50 years old, is a doctor, used to crises. After 17 years with the Red Cross, he joined Première Urgence Internationale and integrated the unit located in the hospital of Arauquita, a few kilometers away from Venezuela, on the other side of the river. His patients are migrants and often “pendulars”, the name of the Venezuelans who do not hesitate to travel back and forth by dugout canoe to come here to work and receive care. His patients are children and especially young, pregnant and desperate women. On the other hand, contraception is in permanent failure, because of the ineffectiveness of contraceptive injections – unreliable or outdated products – or the difficulty in obtaining silicon implants, expensive contraceptives, inaccessible. Carlos remembers this young woman of twenty years, pregnant and already mother of four children, the first of which was conceived when she was barely fourteen years old.

Contraception, vaccines, medication for heart disease and epilepsy, everything is lacking in Venezuela, where hospitals are powerless in the face of empty pharmacy shelves.

The men suffer from chronic diseases due to poor nutrition: colon diseases, gastritis and, for all of them, diabetes and hypertension. Carlos knows how to treat everything, he vaccinates a lot of patients and his pharmacy is fully stocked, but he despairs of seeing this unknown, suffering population, whose pathologies can degenerate and who leave for the other side of the river or take the road to exile. “I dream of being able, one day, to do long-term medicine. For the moment, we are doing emergency medicine. It’s indispensable and sometimes miraculous..”

In the hospital courtyard, pregnant women and sick men line up. Before leaving with a diagnosis and medication. Two men, a farmer and a teacher, tell how their village of “La Victoria” lived through the two months of fighting between the guerrillas and the Venezuelan military forces: “Kalashikovs, tanks, helicopters… in one morning, the village was emptied. The remaining inhabitants lived holed up for weeks!” Later, the two men will leave by dugout canoe, but to come to the mission to be treated, they are ready to cross the river of all dangers again.

Alexandra, 31, is a psychologist. All along the migrant route, Première Urgence Internationale psychologists support the emergency team. You don’t come from a country in pieces after walking for weeks on mountain roads without breaking down. Alexandra’s day-to-day work is to receive and accompany men and women suffering from depression, anxiety and sometimes “acute stress”, the trauma of a tragedy experienced along the way.

First of all, the children, in crisis, whose psychosomatic disorders hide the pain, often reveal a regression in the child who has lost his or her schooling, who has been exiled, terrorized, and whom the parents, powerless, are no longer able to protect them. The parents have lost their jobs, sold everything they owned and can no longer feed their families. They wander around looking for odd jobs at the first port of call and, from being a worker, engineer or teacher, they become coffee sellers in the parks, rent out their arms or go to the garbage. Disgraced.

Single women are often victims of domestic and sexual violence. Prey to whom “good souls” pay the border crossing, taking away their documents as a guarantee, demanding the impossible repayment of the debt before handing them over to prostitution networks. For all of them, it is shock, humiliation, degradation. And, at worst, the rapes on the way, the loss of children or the memory of the fighting on the border between guerrillas and the army or between rival bands.

At each stage, Alexandra and the other mission psychologists take the time to evaluate the psychological state of the migrants, men, women and children, listen, advise, direct, because the psychologists know that it is useless for an exile to arrive at the end of the road if he or she is lost on the way.

Find out more about our humanitarian mission in Colombia.