By continuing to use this site, you agree to the use of cookies. Cookies are used to suggest information based on your browsing patterns and to provide us with information about site usage. For more information and to manage these settings, click here
Home > News > Stop in Kilo 7 in Iraq

Stop in Kilo 7 in Iraq

Since March 2017, Première Urgence Internationale has been extending its area of intervention in Anbar governorate (Iraq), providing emergency support to people in need. These activities contribute to the on-going resumption of services in the area, where people who have been affected by the recent conflict are progressively restarting their lives. 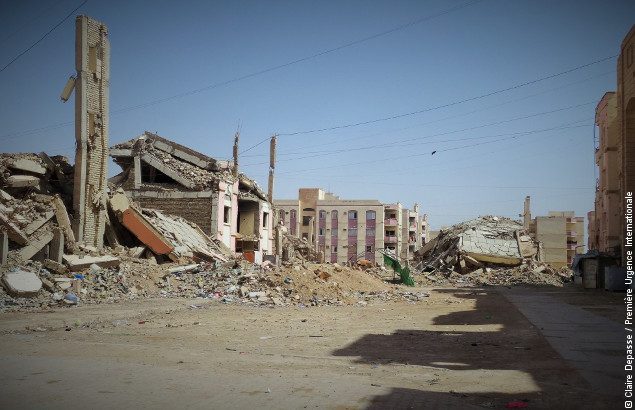 The mobile clinic of Première Urgence Internationale has just arrived in Kilo 7. 650 displaced families live here. Kilo 7 is the name given to the informal settlement of internal displaced persons (IDPs). It used to be a place with residential buildings, but was greatly affected by the conflict and suffered from heavy destruction. The people living there left. In the meantime, other IDPs with nowhere to go started living here, among destroyed and abandoned buildings. The name just comes from the fact that it’s on the Kilo 7 of the road. Displaced persons living in this settlement cannot return home, either because their area is still unsafe, their house was destroyed or because they do not have the financial means to do so.

A woman and her daughter are slowly approaching the nurse. “Are you ready? The doctor asked us to come back for a consultation for my daughter”. In Ramadi, in west Anbar governorate, one of the mobile clinics of Première Urgence Internationale composed of doctors, nurses, pharmacists and medical assistants visits on a regular basis this informal settlement. The medical teams perform free consultations, provide drugs and spread information on health and hygiene practices with a focus on crowded-living conditions. 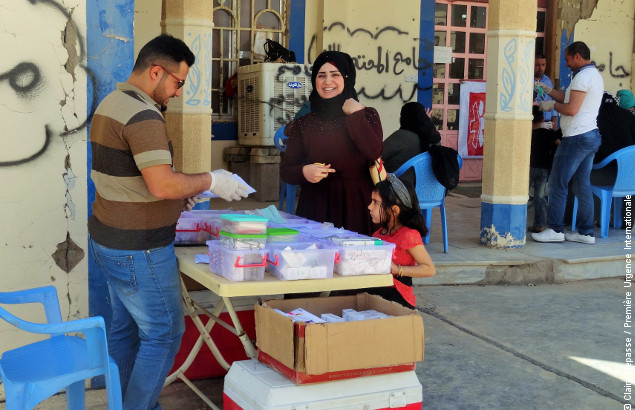 After their consultation with the doctor, a woman and her daughter pick up their prescribed drugs at Première Urgence Internationale’s pharmacy set-up in Kilo 7

Harith Audah, Première Urgence Internationale’s Health Officer in Ramadi supervising our mobile activities, explains how important this support is for people who do not have access to the most basic services. Together with his family, he had to leave his city Fallujah (Anbar) towards Iraqi Kurdistan during the conflict, and has only recently returned. He was himself a displaced person for three years, benefiting from services from other humanitarian organizations, and is now trying to help others in need.

“We can see it when we arrive on the field, they are happy because we are breaking their routine and bringing something good.” shares Harith.

The first international NGO operating in west Anbar for returnees

Beside its mobile activities for displaced persons, Première Urgence Internationale is supporting the general resumption of health services in Anbar. As the large-scale military battles against the Islamic State group have now subsided, people have progressively been returning back to their cities and villages, where roads, houses, hospitals and schools need to be rebuilt. As soon as access to west Anbar areas was resumed, Première Urgence Internationale was the first international humanitarian organization to support returnee families.

Première Urgence Internationale has been materially, financially and technically supporting Obaidi General Hospital in al-Qa’im district in Anbar. Previously under the control of the Islamic State group, al-Qa’im district and its inhabitants had been without governmental or humanitarian aid since 2014. The hospital building was partially destroyed and had not been functioning since then. Thanks to rehabilitation works and the provision of essential equipment, the facility is operational again and providing primary health care services to a population of 30,000 people.

In addition to the lack of primary health care services, west Anbar areas were left without any reproductive healthcare services available. Families had no access to ante natal care, gynecological consultations and women were mainly giving birth at home, without assistance. Première Urgence Internationale thus undertook to support with equipment and consumables the creation of an emergency delivery room in Obaidi. Doctors, nurses and midwives are now able to provide quality reproductive health care services to women. Première Urgence Internationale Iraq team was even very proud to witness that on Friday, May 4th, Mustafa, the first baby was born in Obaidi facility, being the first healthy delivery to be carried out in the area with proper equipment and sterilisation, staff and medical care in over four years.