By continuing to use this site, you agree to the use of cookies. Cookies are used to suggest information based on your browsing patterns and to provide us with information about site usage. For more information and to manage these settings, click here
Home > News > FIGHTING CHILD MALNUTRITION IN YEMEN

Last September, Première Urgence Internationale opened a nutritional stabilisation centre in Aljabeen hospital in the Raymah Governorate, situated around a five hour’s drive away from Sana’a in Yemen. This centre was built to treat complex medical cases in child under five suffering from acute severe malnutrition.

“The manager of the Aljabeen hospital warned Première Urgence Internationale teams of the impossibility for the building to take on children under five suffering from acute and severe malnutrition who need to be hospitalised”, explains Benjamin Gaudin, mission leader in Yemen at Première Urgence Internationale. Severely impacted by conflict, several healthcare organisations no longer work in the country or critically lack equipment or staff. The war that has been raging between the two sides for a year and a half has led to catastrophic consequences for the country and its people. “Gaining access to healthcare is extremely complicated for the communities, particularly those in more isolated areas”, adds Benjamin Gaudin. “This hospital is supposed to welcome the most serious medical cases to be treated in the Raymah Governorate and yet the ability of the structure to provide quality care is not very high”.

As part of the programme set up to fight against malnutrition in Yemen, the Première Urgence Internationale teams have decided to open a hospital unit allowing them to deal with and treat the most complex cases in the Raymah Governorate. The children who are suffering from malnutrition often suffer from associated illnesses such as respiratory infections that require them to be hospitalised. When they are admitted to the stabilisation centre, the child puts together a nutrition programme and is treated for the illnesses that they are exposed to at the same time.

According to the World Food Programme (WFP), Yemen has one of the highest rates of child malnutrition in the world. Nearly a quarter of children under five suffer from stunted growth.

Preventing a resurgence of malnutrition

In Aljabeen hospital, 2,300 metres above sea level, a team comprised of doctors, nurses, nursing assistants, health educators and cooks have been able to receive patients since September. Young patients accompanied by a parent are treated over a period of 10 to 15 days. They receive care that is adapted to their condition and benefit from the services and quality medical care provided by the team. When the child leaves the hospital their family receives a food ration allowing them to meet their food needs at home for the next three months. “We plan to distribute a food ration to the children’s families to cover three months of the family’s food needs”, explains the mission leader, “the objective is to both provide support for the most vulnerable families in order to reduce the risks of malnutrition among children but also to encourage families to keep their child at the centre until they have finished their treatment”.

Another important activity that the Première Urgence Internationale teams organise is the distribution of food to the most vulnerable communities in the Raymah Governorate. Mobile clinics comprised of doctors, nurses and midwives also travel to the governorate and visit the most isolated villages in order to provide the communities with essential healthcare including treatment for malnutrition. During these activities, the mobile clinic teams identify the most severe cases of malnutrition and send them to the stabilisation centre.

Setting up of this activity will also allow us to obtain accurate data on acute severe malnutrition in the Raymah Governorate. “We know that there is a need for it but it is very complicated to obtain reliable statistical information in Yemen today”, explains Benjamin Gaudin.

The stabilisation centre can accept up to 26 patients per month. 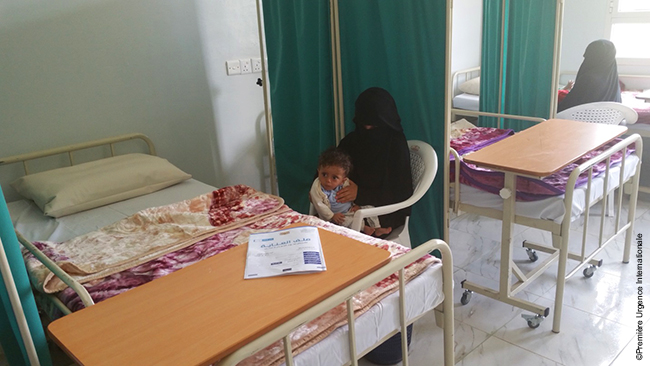