By continuing to use this site, you agree to the use of cookies. Cookies are used to suggest information based on your browsing patterns and to provide us with information about site usage. For more information and to manage these settings, click here
Home > News > DRC: Première Urgence Internationale vaccinate 32,500 children against measles

The Democratic Republic of the Congo (DRC) is still plagued by several deadly viral epidemics, including COVID-19 and the Ebola virus disease. Première Urgence Internationale is participating in the emergency health response to curb these two epidemics, and continues, at the same time, its vaccination campaign against measles in the provinces of Kasai and central Kasai. Between April and May 2020, more than 32,500 children were vaccinated against this deadly and highly contagious disease. 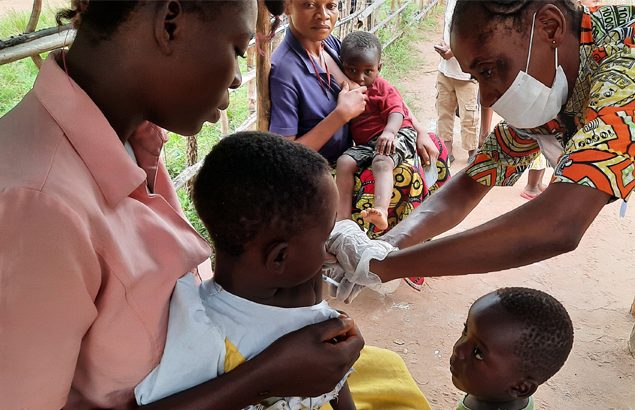 The COVID-19 pandemic is far from being the only health scourge affecting the DRC. Since August 2018, the country has also been fighting against the 10th fatal epidemic of Ebola virus disease in the east, against which Première Urgence Internationale is carrying out prevention and control activities to curb its spread. Since June 1, 2020, a new epidemic of Ebola virus disease, the 11th, has appeared in Equateur province, in the northwest of the country. The DRC has also been facing a deadly measles epidemic for 18 months. From early 2019 to today, the DRC has recorded more than 372,000 cases of measles and nearly 7,000 deaths, including many very young children, while there is a safe and effective vaccine.

Intervene at the onset of symptoms

Première Urgence Internationale intervenes in the provinces of Kasaï and Kasaï central as part of the response to this epidemic of measles. The teams are involved in the care, response and training of nursing staff and community relays. The goal: to detect the first signs as early as possible, to treat the disease as soon as possible.

At the same time, Première Urgence Internationale has deployed mobile clinics, made up of nursing staff (doctors, nurses) and equipped with all the necessary medical equipment, to travel to areas too far from Kasai health centers.

A first vaccination campaign was carried out in April 2020, in the Ndekesha health zone, a rural area located 120km northwest of the city of Kananga. In five days, 9,518 children (aged 6 months to 5 years) were vaccinated.

A second campaign was carried out in late May in the Demba health zone, 65km east of Kananga. In five days, 23,000 children (aged 6 months to 5 years) were vaccinated against measles.

A new vaccination campaign is planned in the coming weeks in the rural health zone of Ndjoko Mpunda; it targets 13,000 children. Première Urgence Internationale teams and their state partners hope to reach several thousand children again.

These vaccination campaigns are implemented by Première Urgence Internationale with funding from the Humanitarian Fund in the DRC.