By continuing to use this site, you agree to the use of cookies. Cookies are used to suggest information based on your browsing patterns and to provide us with information about site usage. For more information and to manage these settings, click here
Home > News > MEASLES IN THE DRC: IDENTIFY THE FIRST SYMPTOMS TO RESPOND AS EARLY AS POSSIBLE

MEASLES IN THE DRC: IDENTIFY THE FIRST SYMPTOMS TO RESPOND AS EARLY AS POSSIBLE

The Democratic Republic of the Congo is facing a large-scale measles epidemic. In the DRC in 2019, 6,000 people died from this disease. It remains one of the leading causes of death among young children, despite the availability of a safe and effective vaccine. Première Urgence Internationale is working in the Kasaï and Kasaï-Central provinces to help with the care, the response, and the training of medical staff and community supporters. 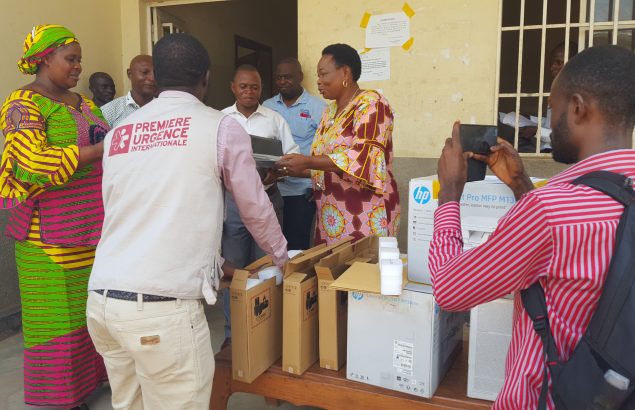 “Deaths occur when those infected are taken care of too late”, explains Rémy Kalenga, Health Project Manager for Première Urgence Internationale in the Democratic Republic of the Congo.  “The first signs of this disease must be identified as early as possible,” he adds.

Première Urgence Internationale organises training with community supporters whose mission is to actively look for cases of the illness, refer them to healthcare facilities and raise awareness in their community about the first signs of measles, and the vaccination. As soon as a rash, a cough, severe cough or fever appears, it is vital to be referred to an emergency health centre for treatment.

THE VACCINATION IS INSUFFICIENT IN CERTAIN AREAS OF THE COUNTRY

In early January, 80 cases of measles were reported in Kasaï-Central and around 150 cases in Kasaï. “There is a decrease in the number of cases in early 2020, but the data shows that the curve isn’t steady. These figures are still alarming” emphasises Rémy.

All 26 provinces of the DRC are affected by the epidemic which started in June 2019 and was unable to be stopped, despite a mass vaccination campaign organised last November. “We recognise that in certain areas, the vaccination is insufficient because children are not actively sought out, and the vaccination schedule is not adhered to.” In mid-January, the number of cases announced was 300,000 patients.

Community supporters, trained by Première Urgence Internationale, are going to the hardest to reach areas to raise awareness of the vaccination. All training is carried out in the community dialect making it possible to reach more people. “This is the key,” adds Rémy, “we will be able to actively search for cases.” 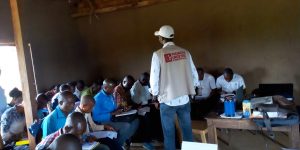 “THE WORST MEASLES EPIDEMIC IN THE WORLD”

The Première Urgence Internationale teams also train healthcare staff from health centres and management teams in health zones in order to refresh particular knowledge about the disease and answer specific questions about the current epidemic.

Première Urgence Internationale also wishes to deploy mobile clinics made up of nursing staff who will travel to communities that are too far away from health centres. These efforts are essential to overcome what the World Health Organization calls “the worst measles epidemic in the world” 1.