By continuing to use this site, you agree to the use of cookies. Cookies are used to suggest information based on your browsing patterns and to provide us with information about site usage. For more information and to manage these settings, click here
Home > News > Coming to the aid of the Syrians in Hama

Coming to the aid of the Syrians in Hama 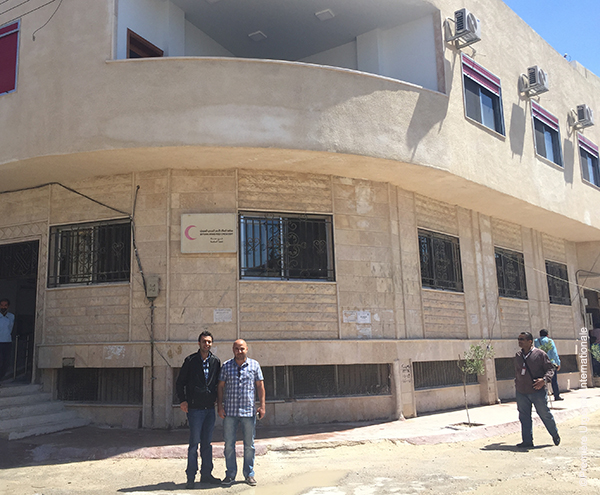 In Al-Salamyah, in the Hama Governorate in Syria, a health centre opened its doors on 8th May. This rehabilitation project supported by Première Urgence Internationale is a response to a crucial need in a region where many displaced people take refuge and where health infrastructures are only partially operational.

‘It has a strategic position,’ says Emmanuel Tronc, head of the Syrian mission. The health facility is in fact situated between the armed opposition groups in the west and the Islamic state in the east. It opened in May in Al-Salamiyah, 45km from the city of Homs, in an area controlled by the government. Since 2013, 35 000 families native to Al-Salamiyah have regularly been the target of attacks by different opposition groups. Nevertheless, the city has become a refuge for more than 120 000 displaced people from the east of the Hama Governorate. Existing infrastructures are overloaded by this influx of people, in particular health services, which cannot meet all needs. In response to this situation, Première Urgence Internationale launched a project in 2014, in collaboration with Syrian Arab Red Crescent (SARC) and in partnership with the European Commission’s Humanitarian Aid and Civil Protection department (ECHO) and the Office of U.S. Foreign Disaster Assistance (OFDA). The project’s aim was to make primary healthcare accessible to the people of the region: host populations, refugees and people returning to their region, by rehabilitating the Al-Salamiyah primary health centre run by Syrian Arab Red Crescent (SARC).

A centre for care and for health monitoring

After a year of work, the building is open. Première Urgence Internationale is sustaining the unit’s operation with some financial support as well as supplying medicines. The health centre offers in particular mother and child healthcare, paediatric consultations and dental care. Around 2700 people every month will benefit from consultations carried out by the medical team supported by Première Urgence Internationale.

Because of the support of the Première Urgence Internationale team, the clinic will become an Early Warning Alert and Response System (EWARS) site, a system developed in conjunction with the Ministry of Health and the World Health Organisation (WHO). It will allow healthcare workers to analyse the region’s health data and to follow developments, leading to better information and planning.