By continuing to use this site, you agree to the use of cookies. Cookies are used to suggest information based on your browsing patterns and to provide us with information about site usage. For more information and to manage these settings, click here
Home > News > Climate change and conflict: a subtle but real connection

Climate change and conflict: a subtle but real connection

On the occasion of its Earth Week, Première Urgence Internationale is launching a series of articles focused on the environment, detailing the concrete actions taken and the objectives set to go further in its environmental commitment. 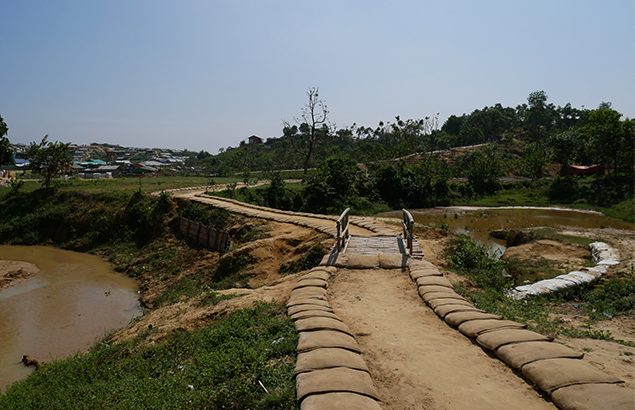 © C.Maigne | Countries in conflict situations are in a position of high vulnerability regarding climate change.


The first article in this series highlights the complex link between conflict and climate change. This choice of theme is no coincidence, as 2021 is the first year that the International Crisis Group has included climate change in its list of 10 conflicts to watch.

“Climate change is not a new phenomenon, but it is accelerating and therefore its impact on conflicts is becoming increasingly noticeable. In reality, there is no direct causal link between climate change and armed conflicts. It all depends on the capacity of governments to respond to climate phenomena and the magnitude of the phenomena themselves”, says Jean Javogues, Director of Development and Innovation, he adds: “We realise that many governments are having real difficulties in dealing with it, whether it is food insecurity, water scarcity, migration, or competition for natural resources.”

During the COP21 in 2015, states committed to counteracting this global warming and limiting the temperature increase to +1.5°C above pre-industrial levels and keeping warming below +2°C by 2100.

“Despite a reduction in greenhouse gas emissions in 2020, mainly due to the COVID-19 pandemic, we are currently on a trajectory that ranges between +2.7° and +3.1° in 2100, which is well beyond the scientific recommendations, with the risk of reaching the point of no return“, insists Jean Javogues.

A study by Stanford University published in 2019 states that in a +4°C world, the consequences of climate change would have an influence on approximately 26% of existing conflicts. This would have economic and political consequences, particularly in terms of migration.

“Climate change is a risk multiplier and acts as an aggravating factor on economic, social and political risks”, says the Director of Development and Innovation, he adds: “It depends mainly on the local context and the level of vulnerability of the populations concerned, but more specifically, climate change will have an impact on the abundance of natural resources and therefore the competition for them. Whether real or imagined, it is the perception of scarcity that affects the risk of conflict.”

Of the 20 countries considered most vulnerable to the consequences of climate change, 12 are currently in a conflict situation according to the ICRC. These include Mali, Niger, Afghanistan and the Democratic Republic of Congo, which are also part of Première Urgence Internationale’s intervention zones. 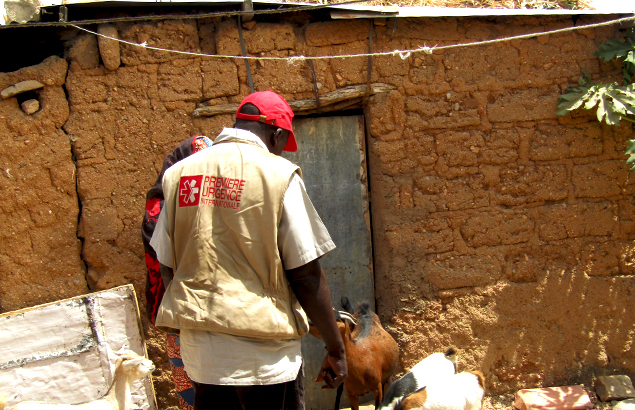 © Première Urgence Internationale | A member of the NGO on a field mission.

With weakened capacity to implement adaptation measures, countries in conflict situations find themselves in a position of high vulnerability to climate risks.

Some governments in countries such as Myanmar, will have to adapt to climate change permanently if the effect of rising sea levels is to be considered.

The case of Myanmar

“These economic activities are particularly sensitive to the consequences of climate change, whether it be rising temperatures or increased variability in rainfall“, says Jean Javogues, Director of Development and Innovation, he adds: “Myanmar is an inherently prone country to extreme weather events such as floods, cyclones, droughts and heavy monsoons.”

In 2008, Cyclone Nargis devastated the coast of Myanmar, leaving more than 130 000 people dead or missing. A tragic example of what we are likely to witness more and more in the years to come.

Another important issue is rising water levels. If the water rises by 0,5 metres, it would cause the retreat of 10 kilometres inland from the country’s main production area: the Ayeyarwady Delta. 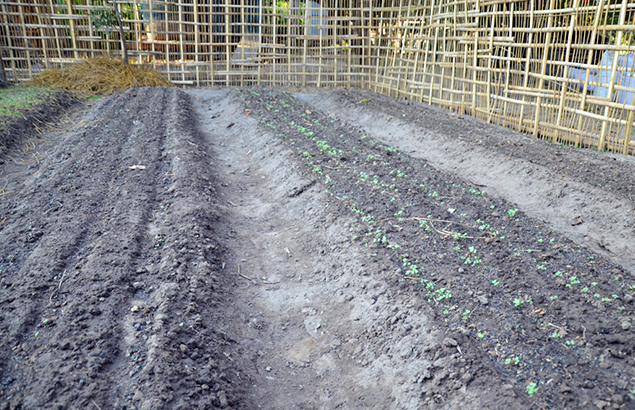 Climate predictions are worrying for Myanmar, with temperatures predicted to rise by 5.5 degrees by 2100 according to USAID. This would cause some of the impacts listed in the box below.

“Climate change will disrupt Myanmar’s natural ecosystems with impacts on the agricultural and fishery sectors, which will have significant political and socio-economic consequences“, warns Jean Javogues, he adds: “Myanmar’s political situation is currently very worrying and knowing that climate change acts as a risk multiplier is all the more alarming. We will have to monitor the situation closely.”

Other countries such as Syria are facing increasing risks of water scarcity. Multiple severe droughts have impacted the Syrian agricultural system since 1900 and have led to food insecurity, causing thousands of people to migrate to large cities, with all the pressures that this creates for host and new communities.

“While climate change cannot be directly linked to the Syrian conflict, it is an integral part of the many factors that led to the 2011 uprisings“, he says.

Several countries such as Chad and Yemen also have alarming situations to monitor.

“The decrease in water resources increases the risk of conflicts and tensions. We notice that in many of the situations studied, climate change is not the cause of the conflicts, but rather aggravates and lengthens them“, notes Jean Javogues.

The role of humanitarians

Première Urgence Internationale has made the environment a central concern since 2020.

As early as December 2020, the NGO was a signatory of the “Declaration of Commitment of Humanitarian Organisations on Climate“.

Première Urgence Internationale is also committed to sharing a carbon assessment with other French humanitarian NGOs. Through the Bilan Carbone Group, the NGO contributes to the harmonisation of the perimeters of evaluation (linked to carbon) between the associations of the sector while ensuring advocacy on environmental issues

“Humanitarians have an essential role to play, in terms of testimony and advocacy, local capacity building as well as population resilience“, insists the Director of Development and Innovation. 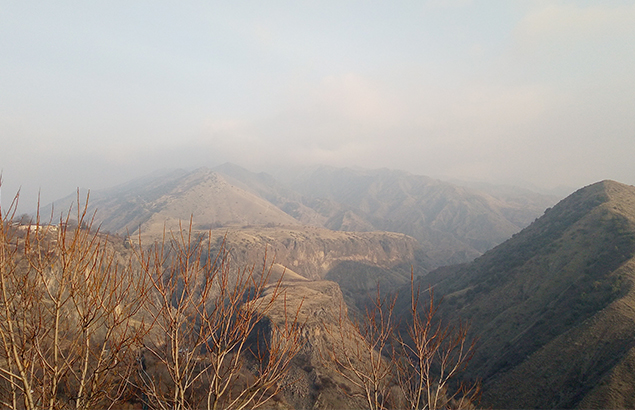 © Première Urgence Internationale | The environment and climate change are thus an integral part of the NGO’s 2021 strategy.

This is why Première Urgence Internationale is committed to taking into account the challenges of climate change in its existing and future missions.

“Climate change has the potential to destabilise political institutions, which will increase the risk of conflict with significant humanitarian consequences. By altering the nature and severity of humanitarian crises, it will also change the character of conflicts“, says Jean Javogues.

What solutions are available?

Environmental impact tools for humanitarian projects (such as NEAT+) exist and allow climate and environmental risks to be included in the design and management of projects in order to adapt them to future conditions.

“Humanitarians’ objective will also be to strengthen the capacities of actors at the local level by encouraging the active participation of communities so that they can find solutions to adapt to climate change and strengthen their resilience“, he insists.

Since 2020, Première Urgence Internationale teams have created an Environment Task Force within the organisation. Through meetings, training, actions and the exchange of ideas, the teams are working to reduce their environmental impact, both at the NGO’s headquarters and in the field.

The environment and climate change are thus an integral part of the NGO’s 2021 strategy.

For more information on Première Urgence Internationale‘s actions in favour of the environment, keep an eye on the news and on our networks or subscribe to our newsletter.


It has been a recurring theme for several years now: the average temperature of the planet is rising. This is due to human activities, as more and more greenhouse gases are accumulating in the atmosphere, increasing their warming power.

This rise in temperature will lead to a change in precipitation patterns, increasing the risk of droughts and floods. But also an increase in the frequency, duration and intensity of extreme weather events: for example, an increased risk of category 4 and 5 hurricanes as seen in Central America in 2020.

Another change is the melting of glaciers and the ice cap, which will cause sea levels to rise, resulting in flooding, erosion of coastal areas and the disappearance of islands, particularly in the South Pacific. The thawing of the permafrost poses additional and worrying risks, with a direct impact on populations, particularly in Siberia and Canada.

“The oceans absorb most of the greenhouse gases that are released into the atmosphere, causing them to acidify and leading to the destruction of marine ecosystems and the populations that depend on them“, adds Jean Javogues.

“All these biophysical consequences will have a significant impact on human populations with social, political and economic repercussions that will be more or less important and dramatic depending on the region and the level of vulnerability of the communities“, he concludes.