By continuing to use this site, you agree to the use of cookies. Cookies are used to suggest information based on your browsing patterns and to provide us with information about site usage. For more information and to manage these settings, click here
Home > News > Aysha fights to feed her family

Aysha fights to feed her family

Aysha is a palestinian refugee who currently lives in the Gaza strip. Mother of 8 with a severely ill husband, Aysha has become, at 66 years old, the sole breadwinner of the family. She fights to feed her loved ones, with the help of humanitarian organisations. 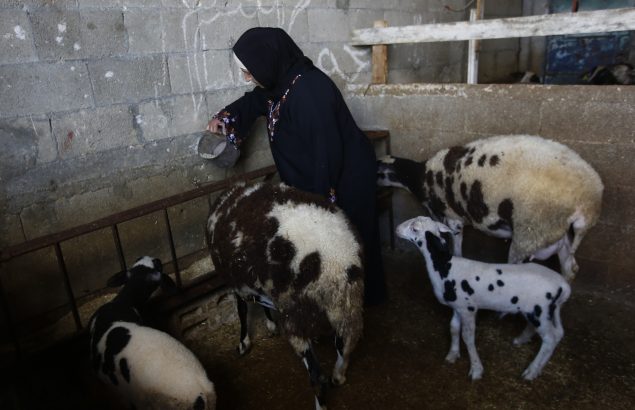 Her first line of help comes from the Ministry of Social Development (MoSD) from which she gets an allowance of 285 euros every three months. However, because of the financial crisis that this Ministry is facing, not all all the payments are delivered.

As a result, for the last six months, Aysha received only one allowance. This situation has affected 75,000 families, just like hers. Aysha’s family, like 33,8% of the Gaza population, lives in extreme poverty with a total of 166 euros per month, which is what she uses to feed her entire family of ten.

This is the amount of money that she gains from her sheep breeding business. The war destroyed everything in 2014, but before that she had a successful activity. In order to give her an opportunity to start afresh, Première Urgence Internationale helped her with 900 euros in cash in 2017.  Now she owns three ewes and two lambs.

In addition, she has also benefited from a training programme on how to develop an income generating activity. Within the same year, Aysha has also received a cash assistance of 1700 euros to extend her sheep breeding activity, but also to explore new business projects such as producing dairy products.

Every four months, Aysha receives a food parcel which contains flour, oil, sugar, canned fish, lentils and milk, but it is barely enough to sustain her family. She is thus obliged to spend 71 euros per month for food only, which amounts to 60% of her monthly expenses.

In the Gaza strip, the share of food in the total household consumption is about 35% on average. Aysha’s family depends on food assistance and other forms of social transfers, like 80% of the population. The sad reality is that there are not enough resources to cater for all the needs.

Though they are significant, the humanitarian actions funded  by ECHO or UNRWA will not prevent this sexagenarian, just like other Gazans, to live in fear of making ends meet.