By continuing to use this site, you agree to the use of cookies. Cookies are used to suggest information based on your browsing patterns and to provide us with information about site usage. For more information and to manage these settings, click here
Home > News > An app to assist people affected by HIV 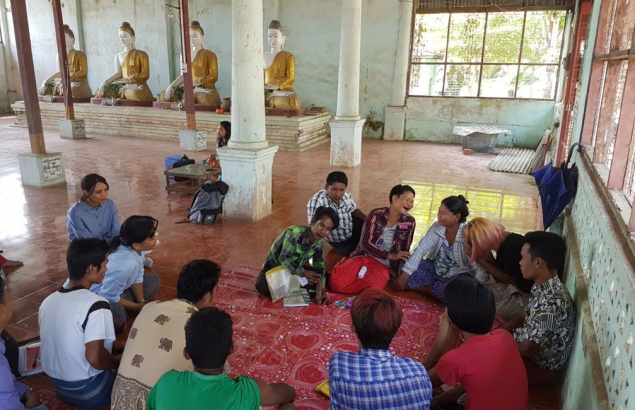 For more than 70 years, Myanmar has been affected by conflict between government forces and armed ethnic groups. These tensions caused the movement of nearly two million people. Today, Myanmar is one of the poorest countries in the world. Ethnic minorities and displaced people are particularly affected by the lack of access to essential services.

Since 2001, Première Urgence Internationale (as AMI) had Health and WASH programs in Yangon division including HIV prevention and treatment.

Since 2011, the NGO added Global Fund as a donor to implement HIV prevention and treatment in South Yangon out of our base in Dala.
Between 2012 to 2017, Première Urgence Internationale lead a reproductive health program in South Yangon district and Kayin State. Its goal was to revitalize the community health services.

Even in countries where availability and ease of access to antiretroviral treatment (ART) can provide for a “typical” life , people affected by HIV face discrimination in their work, family circles, and within the health system. In this context, sharing and exchange of anonymous information can be an essential part of life.

The HiPEN app is for people affected by HIV. Today this is 36.7 million globally, mainly in sub-Saharan Africa, Asia Pacific and Eastern Europe. HiPEN is targeted for the most at-risk patients. In particular, persons with several grounds of discrimination: sex workers, homosexual men, drug users and refugees. For these categories of people, access to information is even more difficult, while it remains essential to reduce the spread of HIV.

Still in prototype, the HiPEN in addition to being available online is an App compatible with Android and Apple. It will be a platform for information and exchange between users. The information will remain anonymous in order to avoid discrimination.

Using HiPEN, users will have access to publications and policies by national authorities, UNAIDS and other relevant sources. The app will offer training books, to increase the knowledge on HIV. It will put users in touch with appropriate health structures.

Above all, HiPEN will be a platform of discussion, private and public, to encourage and facilitate the sharing of ideas, experiences and knowledge on a variety of topics. For example, antiretroviral therapy, prevention of sexually transmitted infections, and prevention of mother-to-child transmission. This forum will allow users a space to feel supported and encouraged by their peers.

HiPEN also offers innovative services such as the Information Transfer Mechanism (IRM). Users registered on the platform will be able to share reviews about the treatments and services provided. The aim will be to increase transparency of the difficulties specific to HIV-positive people, and to involve members of civil society in a process of regular improvement of the services provided.

A tool for public utility for people affected by HIV

The HiPEN app has already been tested in Myanmar, thanks to the partnership of Première Urgence Internationale with Myanmar Positive Group. The development is carried out in collaboration with Nexlabs, a software development non profit in Myanmar.

Première Urgence Internationale hopes the authorities will take ownership of the application and will take over the responsibility and maintenance of HiPEN. A platform designed to become a tool of public utility.

Please donate and help us finalize the application.