By continuing to use this site, you agree to the use of cookies. Cookies are used to suggest information based on your browsing patterns and to provide us with information about site usage. For more information and to manage these settings, click here
Home > News > A PROJECT RESPONDING TO MIGRANTS’ NEEDS IN THE ILE-DE-FRANCE REGION

Every day, nearly 100 migrants arrive on foot or by train in Paris, their first point of arrival in France. In 2015, there was an increase in street camps in the capital. The city of Paris tried to take some steps to improve reception arrangements and to limit street camps, but it was not enough.

Faced with this crisis, there have been more and more groups working there, but they have not managed to set up an effective way of working together. Individuals or charitable associations take the lead, at a micro-local level, to coordinate action, but there is massive and very complex work to be done.

Having already trialled it in the Central African Republic, Première Urgence Internationale decided to set up the Rapid Response Mechanism project in the Île-de-France to respond to migrants’ needs in the area.

This project aims to bring to light the needs of migrants in very vulnerable situations, and to pass this information on to every type of stakeholder (groups, public structures, individuals, etc.) who may be able to respond to these needs. To help with a first emergency response, the team is supporting stakeholders distributing at ground level, by donating basic essentials.

The rapid response mechanism consists of a first phase of humanitarian surveillance, carrying out quick multi-sector evaluations with migrants and sharing the results with nearby partners and individuals. The first phase of the project is crucial: needs must be evaluated and analysed so that the stakeholders can understand them better and respond to them. The aim is to create a connection between vulnerable people and the people who can bring them support. 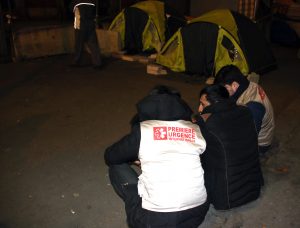 This has happened, for example, with the work carried out at Porte de la Chapelle over the last few months, where the goal was to produce a multi-sector evaluation of the needs of 300 to 400 migrants who were in this area up to May 2017. The second stage of the project is to bring an emergency response involving the distribution of basic essentials and referral to suitable facilities.

This part of the project is based on work by partners and volunteers, in conjunction with action from many groups, individuals and public structures. Sanofi and Solidarity Accord, for example, have organised collections of hygiene products with Première Urgence Internationale along with the people working with them. 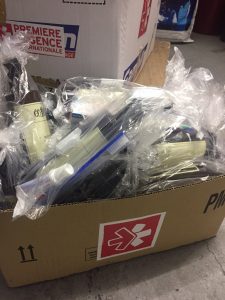 The significant presence of groups and individuals working with people living in the camps in the streets of Porte de la Chapelle means a partial response to primary needs: food, provision of basic essentials (blankets, hygiene kits etc.) and access to health care. This aid allows people to keep their dignity, and a basic social link with the French workers.

Last of all, the project provides for a final phase of raising awareness among residents about the migrants’ situation, with an aim of involving them in the improvement of their living conditions.

‘The aim is to raise awareness among residents: to tell them about the journey the asylum seekers have taken, about the problems they face on a daily basis in France, about the war in their homelands, to help them to realise the difficulties that the migrants living at the end of their street, or in the social housing next door, encounter’.