By continuing to use this site, you agree to the use of cookies. Cookies are used to suggest information based on your browsing patterns and to provide us with information about site usage. For more information and to manage these settings, click here
Home > News > Yemen: waiting for peace 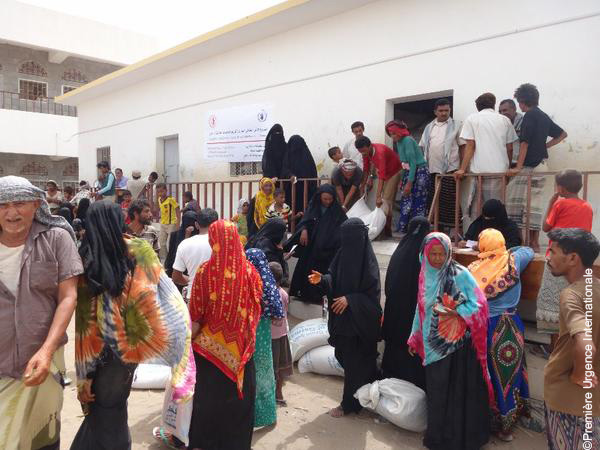 While peace negotiations are continuing in Yemen, the situation in the country is alarming. The conflict has led to displacement of 2.8 million Yemenis, and 21.2 million depend on humanitarian aid. In April, Première Urgence Internationale joined with four other NGOs to criticise the slow pace of the peace process. On the ground, activities dealing with health and malnutrition are helping numerous families in a very critical situation.

In Yemen, 320 000 children are at risk of suffering from severe acute malnutrition, according to the report of 12 April 2016 from the UN’s Office for the Coordination of Humanitarian Affairs. The UN office estimates that during this year, 3 million children and pregnant or lactating women will require malnutrition treatment or preventative services.

In this country, which is among the poorest in the world, combatting malnutrition is a priority for Première Urgence Internationale. Food distribution is organised every month in the Al Hudaydah and Raymah regions. This will help in total more than 557,000 Yemenis, including children, this year. “A child suffering from acute malnutrition has a higher likelihood of contracting illnesses and the risk of death is very considerable“, explains Elise Lesieur, technical department manager at Première Urgence Internationale, “Also, a child who becomes ill, without proper care, has a higher risk of becoming malnourished“. This is what we call the vicious circle of malnutrition.

For the Première Urgence Internationale teams, it is therefore essential to care for sick children as quickly as possible. Mobile clinics manned by medical staff travel to be near the people at risk such as children and pregnant and lactating women. They check their state of health and bring appropriate treatments. “Access to health infrastructures is complicated for people living far away or in areas affected by the bombing. So we must get out and go to the people“, explains Céline Morin, head of Yemeni projects for Première Urgence Internationale. Quite often teams find and treat severe cases of malnutrition in babies over the course of several months with a specific programme. “Malnutrition can lead to death in young children and can also have a long-term impact on their intellectual and motor development“, explains Elise Lesieur.

While Première Urgence Internationale has been working in the country since 2007, the humanitarian situation has worsened dramatically since just over a year ago with the conflict between the Houthi rebels and the coalition led by Saudi Arabia. According to the report from the UN’s Office for the Coordination of Humanitarian Affairs dated 12 April 2016, more than half the population is in need of healthcare services.

Faced with this catastrophic humanitarian situation and the impact of the fighting which is affecting the country so violently, Première Urgence Internationale is appealing to the international community, particularly France, to take responsibility. When François Hollande visited Jordan on 19th April, a press release was delivered to the President of the Republic by the NGO to appeal “to France to do more to put an end to this conflict and prevent further civilian suffering”.