By continuing to use this site, you agree to the use of cookies. Cookies are used to suggest information based on your browsing patterns and to provide us with information about site usage. For more information and to manage these settings, click here
Home > News > Yemen is witnessing another deadly outbreak of cholera

Yemen is witnessing another deadly outbreak of cholera

The humanitarian crisis in Yemen is the worst in the world, driven by conflict, economic collapse and the continuous breakdown of public services including the health care system. Cholera has always been endemic in Yemen; however, a serious outbreak of cholera stroke the country in October 2016, followed by a devastating worst second outbreak in April 2017. More recently, there has been a sharp increase as of March 2019, which could potentially be a third wave of the outbreak. 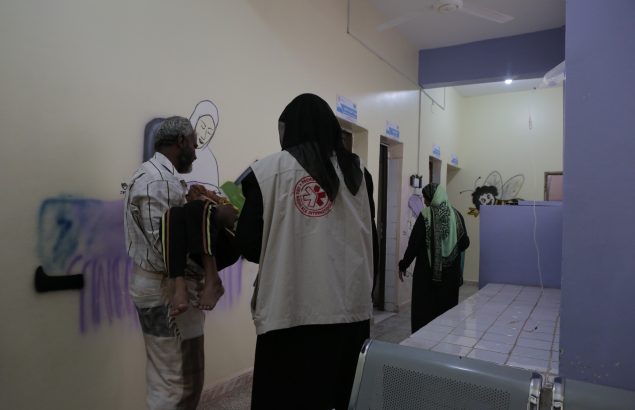 From January, 1st and until April, 13th 2019, 214,798 cases of severe acute diarrhea and suspected cholera cases have been reported by the Ministry of Health and the Health Cluster, led by the World Health Organization (WHO). Of which 445 associated deaths since the beginning of the year. This critical sanitary statement comes exactly two years after Yemen witnessed the world’s largest cholera outbreak, with more than 1 million cases reported. In total, cumulative suspected cases between April 2017 and March 2019 would have led to around 3,000 deaths.

Humanitarian organizations warn against a new ongoing epidemic episode, which could increase in the upcoming weeks. Sandrine Chapeleau, Health advisor for Première Urgence Internationale, explains: “With the rainy season starting early this year(1), the number of cholera cases resurged those last months, since the devastation of Yemeni infrastructure, health, water and sanitation facilities led to the spread of the infection. The number of suspected cholera cases could continue to increase, due to unsanitary conditions.”

Première Urgence Internationale has been operating in Yemen since 2007. The INGO supports the primary health care system in both governorates of Al Hudaydah and Raymah, in close collaboration with the Yemenite Ministry of Health (MoH) and the Ministry of the Planning and the International Cooperation, as well as in the respective Governorate Health Offices (GHO).

To meet the needs of the Yemeni population during the previous waves of the cholera outbreak, Première Urgence Internationale had led an emergency health response. It was part of the official national cholera response led by the MoH and Health and WASH clusters, and was funded by the CDCS (Crisis and Support Center of the French government). The INGO supported 1 Diarrhea Treatment Center (DTC), and 9 Oral Rehydration Treatment Corners (ORTCs), in six districts: Al Meghlaf (Al Hudaydah governorate), Al Jabin, Al Jafariyah, Kusmah, Bilad Al Taam and Al Salafiah (Raymah governorate). This cholera response project ended in July 2018.

Be part of the national response

To respond this outbreak, Première Urgence Internationale provides first primary level medical care for all suspected cholera patients, in all health facilities it supports in Yemen. In addition to the treatment of patients, the INGO reports all cases of severe acute diarrhea and suspected cholera to the national surveillance team, as part of the Disease Early Warning System (eDEWS), to complete data of the epidemic situation. Stool samples are sent for laboratory testing, to confirm the diagnosis of suspected cases. For acute patients suffering from severe dehydration, Première Urgence Internationale’s teams refer them to the Diarrhea Treatment centers (DTCs).

Unfortunately, Première Urgence Internationale has experienced that the national laboratory capacities aren’t strong enough to ensure all patients are properly diagnosed in a timely fashion, as the number of equipped and properly staffed laboratories in the country are very few. The INGO is currently looking for funds to ensure the reopening of its DTC and ORTCs in its areas of intervention.

To support our actions in Yemen, you can make a donation. Your donations ensure our freedom of action, and increase our responsiveness.

(1) Usually, the rainy season in Yemen is from mid-April to August. In 2019, it started earlier.