By continuing to use this site, you agree to the use of cookies. Cookies are used to suggest information based on your browsing patterns and to provide us with information about site usage. For more information and to manage these settings, click here
Home > News > Facilitate access to employment in Jordan

Première Urgence Internationale supports vulnerable Jordanians and Syrian refugees since 2013, through a multisectorial response. To respond humanitarian needs in a sustainable way, the NGO prioritizes livelihood activities. One of the objectives is to enable refugees and vulnerable host populations to enter the labor market. 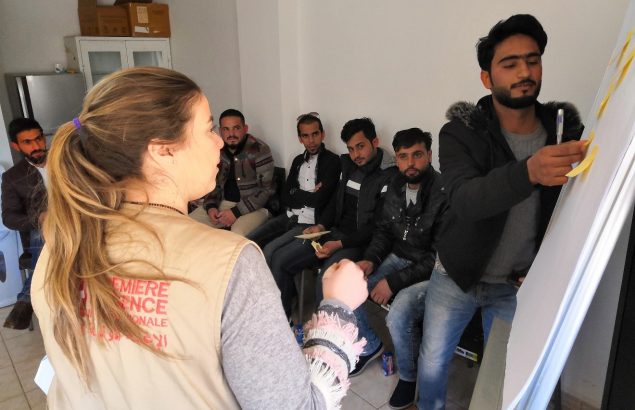 An economic context full of challenges

Eight years after the beginning of the crisis in Syria, the situation remains critical in the neighboring countries, and continues to generate high humanitarian needs. Jordan hosts more than 671,000 registered Syrian refugees, of which 85% live below the poverty line. The country also hosts more than 2 million Palestinian refugee, and multiple other refugee populations.

This influx of refugees in Jordan has increased tensions on an already turbulent economic climate, causing inflation and increasing the cost of living. The crisis also provokes a further pressure on the countries’ resources and infrastructures. Unemployment is yet another challenge: according to the Jordanian Department of Statistics, the unemployment rate reached 18.7% in 2018. It strikes even more the youth people, with a rate at 36% for the age group between 15 and 24 years old. The situation is also particularly critical for Syrians, who struggle to have the right to work in host countries they took refuge in.

Première Urgence Internationale has been working in Jordan since 2013, putting together a multisectorial response in the governorates of Amman, Zarqa, Ajloun, Jerash and Balqa. The governorate of Amman is the one which hosts most Syrian refugees. The NGO’s teams have developed programs in the sectors of protection, health and education. “Livelihoods sector represents the best potential support for vulnerable refugees and Jordanians, to become increasingly self-sufficient”, Head of mission Martin Rosselot analyzes. Continuing to support populations to access basic needs and essential services such as education and health, now Première Urgence Internationale increasingly aims at enabling targeted beneficiaries to generate income, in a sustainable way.

The NGO, in line with the Jordan Response Plan (JRP), seeks to turn the regional crisis into a development opportunity, bridging the traditional humanitarian, development divide through job creation and support to earn a living, for Syrian refugees as well as vulnerable Jordanians. In January and February 2019, 18 focus group discussions have been conducted by Première Urgence Internationale, to assess job seekers’ perceptions of their skills, of existing job opportunities, and of the challenges they face. These focus group discussions permitted to draw up some findings and recommendations.

For example, the need for trainings, to develop both soft and technical skills, has been highlighted by job seekers. All groups, in all governorates, confirmed that the lack of education, as well as of professional skills and experiences, are amongst the main challenges they face when looking for a job. “We need to support them to be better prepared, Martin Rosselot highlights. To help them develop both technical skills, but also soft skills, such as communication, time management, and English classes.”

“Leave no one behind”

The study also put in evidence the need to adopt specific measures, to eliminate barriers and inequalities within the access to labor market. Youth, women, Syrian refugees, and people with disabilities are indeed facing additional obstacles to their integration. “Our role is to contribute reducing these barriers, Head of mission explains. Première Urgence Internationale’s objective is: ‘Leave no one behind’. It is extremely important to raise awareness about these inequalities, to reduce stereotypes and provide to everyone adapted services and infrastructures.”

Findings from this assessment will be taken into consideration by Première Urgence Internationale when designing future projects in Jordan.