By continuing to use this site, you agree to the use of cookies. Cookies are used to suggest information based on your browsing patterns and to provide us with information about site usage. For more information and to manage these settings, click here
Home > News > Yemen: Help people to grow productive home gardens

To address root causes of malnutrition in Yemen, and provide a longer-term response, Première Urgence Internationale leaded a nutrition project in the governorates of Hodeidah and Raymah. Objective: help the targeted households to establish their own productive gardens, and increase their preservation capacity. 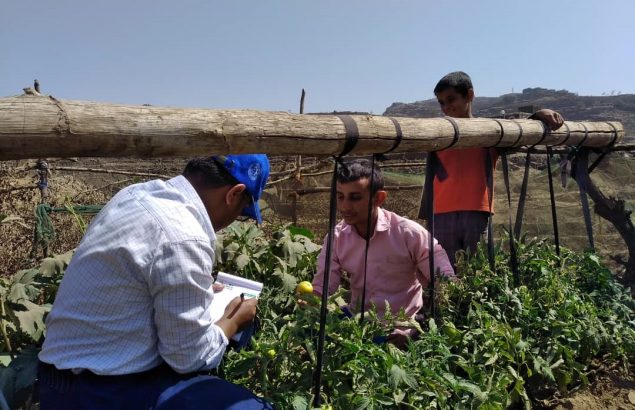 Yemen, one of the poorest countries in the world, is currently facing a severe humanitarian crisis triggered by a civil war, and owing to cholera and diphtheria epidemics, severe poverty, and hunger. One of the objectives of Première Urgence Internationale’s intervention in the country is to contribute to enhance the nutritional and food security conditions of malnutrition-affected households, through a nutrition and training program.

Thanks to the support of the French Embassy, Première Urgence Internationale provided, in the past months, an emergency food response to 880 families affected by nutritional crisis, in the governorate of Raymah.

Première Urgence Internationale’s team visited a family house in Al-Jareb village, following the registration of one of their children, Rayan, identified as severely malnourished, in Al-Jomam Health Facility. Rayan, like many other beneficiaries, received curative treatment. However, generally, root causes of malnutrition – the lack of access to adequate food, safe-drinking water and rapid detection. If these causes are not addressed in many war-affected areas, where malnutrition rates keep on increasing.

For this family with eleven children, the daily life had become difficult when the father fell ill. The family didn’t have any source of income anymore. Additionally, the market to purchase vegetables and food was 4 hours far from their home. As cultivating vegetables is not the general practice followed in Al-Jareb village. The family hadn’t any vegetable garden, but one Qat tree. That consumed most of the rainfall accumulated water. During its intervention, Première Urgence Internationale’s team noticed that the parents had limited knowledge on how to use available assets, like the land and water, to secure food for the family.

Première Urgence Internationale sets up multiple activities in this project, to:

Enhance the capacities of families

Rayan’s family was quickly integrated to the project. Beyond receiving monthly food baskets, the mother, Fatima, actively attended the agricultural training and established a productive home garden. In a short time, this mother was able to feed her children with nutritional meals, using home-cultivated vegetables. Fatima also decided to stop irrigating the Qat tree. Because it has no nutritional benefits, and to devote the efforts to the garden that helped her to access high nutrient vegetables.

Rayan’s mother reports: “I feel really secure when I wake up in the morning to harvest the home-grown vegetables that I will use to make nutritious dish for my children. I apply the valuable advice that was given to us during the dietary diversity training, and I noticed that my children are growing healthier now.” She also started to apply the lessons learned in preserving and transforming foods: “It will help me tackle the issue of not having fresh vegetables in some seasons.”

The success of these trainings also allowed other families to start cultivating home gardens. Even families who were initially not targeted in this project started to make similar backyard gardens. “We help them when they need any guidance”, Fatima says.

This activity implemented by Première Urgence Internationale is part of a broader program. The aim is to reduce malnutrition among the most vulnerable fringe of the population. Particularly women and children under five. Première Urgence Internationale’s intervention in Hodeidah, Taiz and Raymah governorates contributes to the healthy development of malnourished children in Yemen. And eventually takes part in enhancing the resilience and capacities of their families.

These activities have been funded thanks to the support of the French Embassy’s Inter-ministerial Committee for Food Aid (CIAA).