By continuing to use this site, you agree to the use of cookies. Cookies are used to suggest information based on your browsing patterns and to provide us with information about site usage. For more information and to manage these settings, click here
Home > News > West Bank: Palestinian farmers unable to harvest their olives

Every year, in the occupied West Bank, October is the harvesting period for olive trees. A time that exacerbates tensions between Palestinian and Israelis. Two Palestinian farmers, supported by Première Urgence Internationale, share their testimonies of the attacks they suffered. 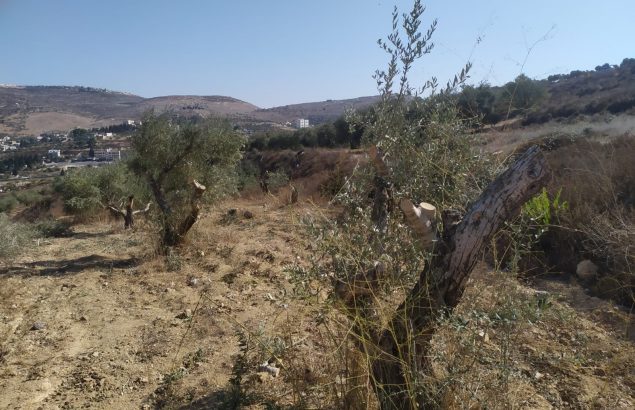 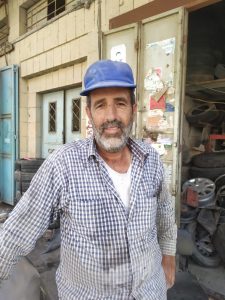 Nasser Qadous, a 51-year-old construction worker, lives in Burin, near Nablus, in the northern West Bank. This father of 5 owns agricultural land in the village, where he grows olives. On the 6th of October, while going to harvest his production in the morning, he discovered his olive trees had been vandalized. “Attacks were made on my land, where I had planted young olive trees. Some trees were cut and destroyed, with an electric saw”, he tells. Fortunately, no one was working on the land that morning: no one was injured in that attack. But Nasser suffered financial loss. The cost required to replant olive trees, as well as all the future income he would have generated thanks to this production. « Besides the young trees, I also lost nine 60-year-old age olive trees, which could have produced around 500 kg of olives. This equates to a financial loss of 2 500 NIS [650 euros] per year », he estimates.

“The attacks are getting worse in Burin”

This is the second time that Nasser suffers from an attack targeting his land and his trees.  Five years ago, a part of his same land had burnt in another attack, damaging many of his olive trees. “The attacks are getting worse in Burin”, the Palestinian farmer observes. « At least once a week, there is someone in the village being attacked.” 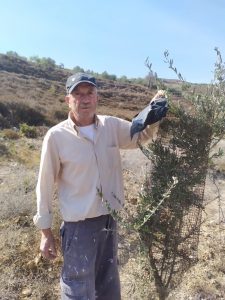 Première Urgence Internationale’s teams also met Ahmad Najjar, a 63-year-old farmer living in Burin. On the 6th of October, Ahmad discovered his olive plantation had been vandalized.  “Someone destroyed and cut my trees with an electric saw”, Ahmad witnesses. “I lost 28 young olive trees that had been planted and irrigated for the past four years. Our family was hoping to benefit from them… In vain. I don’t know if I will replant new olive trees, because the threat of this type of attacks is still there.”


The Palestinian village of Burin is under a constant threat of attacks. Various Israeli settlements, all built in violation of international law, threaten the communities located around Nablus. Palestinian populations of the villages beneath are suffering recurrent violence from their Israeli neighbours, registered by the United Nations Office for the Coordination of Foreign Affairs (OCHA).

This is the first time that Ahmad suffers material damage, but settler violence has already affected him. “The situation is getting worse. Israeli settlers increasingly burn and destroy our crops. Access to some of our lands has now become dangerous. When I need to go in the eastern part of the village, I don’t go alone. I ask some people to come with me. Because settlers are attacking with stones each time they see a farmer. With this latest attack, I have to be even more careful now”, he tells.

Intimidation and violence, up to the death

Israeli settlers’ violence is not a random phenomenon in the West Bank. Settlers mostly target Palestinian villages located near settlements or near settler bypass roads. As is Burin, located near both settlements of Yitzhar and Itamar, known for their violence. These attacks aim at discouraging Palestinian to cultivate their lands, and induce them to abandon their lands. Settlers then can occupy these territories and appropriate them, expanding the illegal settlement. Nasser is one of these owners who risks losing some or all of his lands. “I also owns lands in the eastern part of Burin, but I can’t access these, because of the constant threat of settlers attacks.”

According to the European Union, 413,000 Israeli settlers are living illegally in the West Bank. The frequency and intensity of their attacks have been increasing in the past three years, some attacks resulting in the death of Palestinians. The Israeli authorities are ignoring or encouraging these attacks. Law enforcement in these areas is in the hands of the Israeli army, but the soldiers do not intervene during these settlers attacks, or, in some cases, were even recorded helping the settlers.

According to the NGO Yesh Din, 93% of complaints lodged against settler attacks are abandoned by the police, without any charges. When being asked if he would complaint to the Israeli police, Nasser responded that it was “useless and unnecessary.”

Settlers’ violence towards Palestinian has been increasing since 2016 and continues in 2019. From January and up to the end of September, the United Nations Office for the Coordination of Foreign Affairs (OCHA) registered 236 incidents, resulting in injuries or deaths (54 incidents) or damaging goods or lands (182 incidents). These attacks resulted in the deaths of 2 Palestinians, and at least 74 injured. Settlers’ violence also caused material damages to 4,870 trees and 263 vehicles this year.

Whilst writing this article, Première Urgence Internationale’s teams were informed of another attack, targeting the same village, two days later. A fire, caused by Israeli settlers, burned 70 olive trees before Palestinian firefighters could extinguish it.

Première Urgence Internationale supports civilian victims of these attacks, to reinforce their security and livelihood. You can support our action by making a donation. Your donations ensure our freedom of action.