By continuing to use this site, you agree to the use of cookies. Cookies are used to suggest information based on your browsing patterns and to provide us with information about site usage. For more information and to manage these settings, click here
Home > News > Urgent intervention on behalf of Rohingya refugees 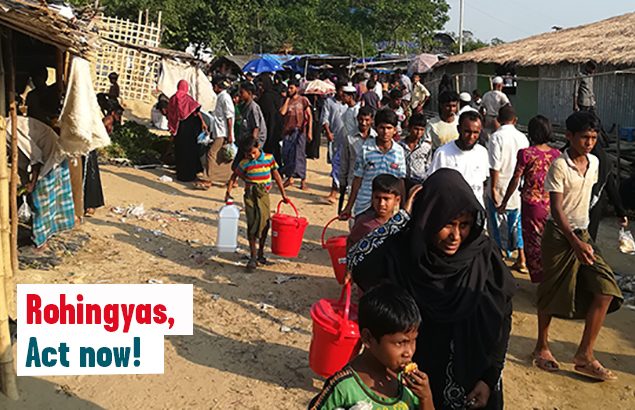 Cox’s bazar is famous for its beach stretching over 120 km – one of the longest in the world. but today, the name of this Bangladesh district is appearing in newspapers for an entirely different record. One thousand rohingya refugees arrive in this region every day after having crossed the border with the country’s neighbour, myanmar. More than 609,000 refugees have crossed the border since 25 august(1).

The reason for their crossing of the bangladesh-myanmar border is the fact that they belong to the rohingya people. They are not recognised as one of the eight major ethno-linguistic groupings referred to by the burmese government as ‘national races’. The history of rohingya refugees stems from the country’s own history and its culture. Tensions began to rise in 1948 when Myanmar – then Burma – declared its independence. The Rohingya were shunned and persecuted.

Bangladesh is the second stage on which what is called the ‘Rohingya refugee crisis’ has played out for over 30 years. Since October 2016, Bangladesh has been faced with a new and major inflow of rohingya refugees. This is due to escalating tensions and violence against Rohingya people in Rakhine state in the North of Myanmar.

Deciding to intervene in a truly exceptional crisis

Première Urgence Internationale has maintained a presence in Myanmar since 1984. Faced with a crisis of this size, it is impossible as a humanitarian stakeholder to simply look away.

“It is a truly exceptional crisis, both in the suddenness of its onset and its magnitude. It’s extremely difficult for the humanitarian community to address the basic needs of such a large population in such a short amount of time – especially as more new Rohingya refugees arrive every day,” explains Maxime, Head of the Bangladesh mission for Première Urgence Internationale.

Following the exploratory team’s needs assessment, Première Urgence Internationale decided to address populations’ priority needs. The NGO will carry out work in the health sector as well as providing access to basic services. Our strategy aims to reduce the risks of epidemics by improving hygiene and sanitation conditions for refugees. We will facilitate access to quality basic services such as water, food and shelter.

More than half (54%) of rohingya refugees in bangladesh are under 18.

The displaced populations are distributed across official camps, makeshift refugee camps, temporary housing and host communities. The population density in these areas increases day on day. The camps are exceeding their capacities in order to make room for increasing numbers of refugees fleeing persecution(2).

Shameem ahsan, the Bangladeshi ambassador to the United Nations in Geneva, has described the Rohingya crisis as “the largest exodus from a single country since the rwandan genocide in 1994.”

If the situation in Rakhine state does not change, the un predicts that over 800,000 rohingya will have crossed the border and come to Cox’s Bazar in Bangladesh by the end of 2017.

If you want to help Rohingya refugees and support the families affected by the humanitarian crisis in Bangladesh, make a donation to première urgence internationale.