By continuing to use this site, you agree to the use of cookies. Cookies are used to suggest information based on your browsing patterns and to provide us with information about site usage. For more information and to manage these settings, click here
Home > HR news > “Unfortunately, in the next years there will be a lot of work for us.”

“Unfortunately, in the next years there will be a lot of work for us.”

Luisa is Italian, she has already carried out two missions with Première Urgence Internationale, as Administration and Finance Coordinator in Jordan and Iraq, she is about to leave for her third mission in Libya when she grants us this interview. 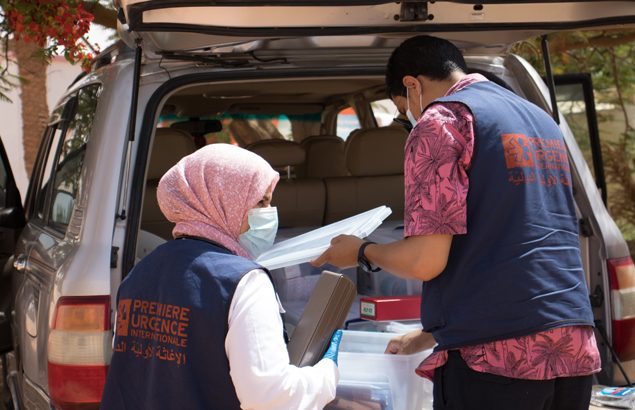 What led you to choose the humanitarian sector?

I have a master’s degree in diplomacy, I originally thought I would follow a diplomatic career. When I was in the master’s program, I did an internship in an embassy and stayed in a guest house run by an NGO. Before that, I had an idea of what the humanitarian sector was like, but I didn’t think it was a career. During my time there, I was able to see the beautiful things that were being done by humanitarians and I realized that I could be more useful working in this sector than in diplomacy.

What really appealed to me and convinced me was the idea that we could make a more visible contribution.

How and when did you hear about Première Urgence Internationale for the first time?

Why did you choose to do your first mission with Première Urgence Internationale in Jordan?

Actually, I had initially applied for a position in Tunis for the mission in Libya; but my application arrived too late so I applied for the mission in Jordan. I decided to apply after talking to a friend, who was working for the Tunis mission at the time, who told me about Première Urgence Internationale environment, missions , the type of mandate and the activities. I was interested and I said to myself, “Come on, why not!”

Do you learn new things in each mission ?

Absolutely, and it is always challenging. Especially for an Admin there is a lot of information that is new and very specific to that specific context, that specific country. If you are in charge of HR, each country has a different legislation that you have to learn quickly enough. Same from a financial point of view you can have different challenges in terms of access to liquidity, bank system or absence of a bank system, type of payment to be used or taxations that the country decided to apply.

Every time, every new mission, there is a big load of information that needs to be learned and understood quickly to be useful.

Could you explain in simple words what an Administrator and Finance Coordinator does and what is her role during humanitarian missions?

The Admin Coordinator is in charge of three main areas. One is Finance and inside Finance there is the budget and accountability management. So, we are talking about the person that is in charge of the overall liquidity of the mission: getting the money, spending the money, ensuring that the money is spent in the correct way according to the procedure that our contract is supposed to be following.

And that is a very simple and summarized financial aspect.

What kind of difficulties have you encountered during your work? And what do you like the most about it?

There are plenty of difficulties. I would say the most difficult thing, and it relates to what I said earlier, is being able to understand the context in a very short time frame. To be able to have a grasp on what regulations are and how the financial system is working. To make sure you can forecast difficulties. So your capacity of reading the context and analyzing the context is very important from day 1.

And what do you like the most about it?

There are several things that are quite satisfying about being an Admin. The easiest one is that when things run smoothly you know that you are doing a good job. You have the capacity of making the work easier for every single department because you are connected to all of them. So when there are challenges and you are able to provide a solution it gives you a certain satisfaction. It is rewarding. You are not the first person the beneficiary is meeting but you are right behind the field worker. If I was not there the field worker would not be able to do his work in the best way possible.

Then there are other small satisfactions, for example you, sometimes, have the very small selfish satisfaction feeling that you are the smartest person in the room. Most of the people think that finance is very complicated and difficult, so sometimes you just do not do anything but they make you feel very smart but you are just doing your job in a very normal way.

Also I would say from the purely HR aspect : while the organization in the country is taking care of the beneficiaries, you can still contribute to the improvement of the country where you are working by taking care of your local staff. Because in some missions, you are so many and you are working in so many different areas that you do not get to know each other. This part gives a lot of satisfaction when you are able to make it work.

From what you have seen on the field during the previous missions, what do you think are the main values of Première Urgence Internationale?

I think that Première Urgence Internationale has a clear orientation towards the beneficiaries. Whatever country we work in, the mandate is always very explicit: the approach to the beneficiaries is always a priority. All decisions are also very oriented, which motivates you more because you feel that you are part of something and that you are working towards a concrete goal.

We are very conscious of our limits, but we always try to do our best to offer the best help adapted to a context and circumstances.

How do you see the future?

I would say challenging. We cannot deny that the year and a half we passed will have an impact especially in the countries where we are working that have less state systems to reinforce either the economy or the health system and to go back to the situation they were in before. This crisis has impacted every country and, much more,the countries that have a weaker system behind so there will be a lot of work. Unfortunately, in the next years  there will be a lot of work for us. There will probably be additional work of lobbying and making sure that countries who have more resources and in this specific case more access to medication and vaccines are willing and able to share with countries who have less. Because this is exactly the time when we cannot just leave them behind.

We have seen that every country is interconnected so whatever happens in a country has an impact on us as well and we cannot just close the borders, our windows and eyes and forget about everybody else.