By continuing to use this site, you agree to the use of cookies. Cookies are used to suggest information based on your browsing patterns and to provide us with information about site usage. For more information and to manage these settings, click here
Home > News > The villages of Travneve and Gladosove need humanitarian assistance in Ukraine

The villages of Travneve and Gladosove need humanitarian assistance in Ukraine

Members of Première Urgence Internationale’s team visited the villages of Travneve and Gladosove on 18 July with a view to assessing local residents’ major needs in light of the now 5-year-long conflict raging on in Eastern Ukraine. After several interviews with residents of the villages were conducted, it was obvious that people living there are in need of humanitarian assistance. Below is their story. 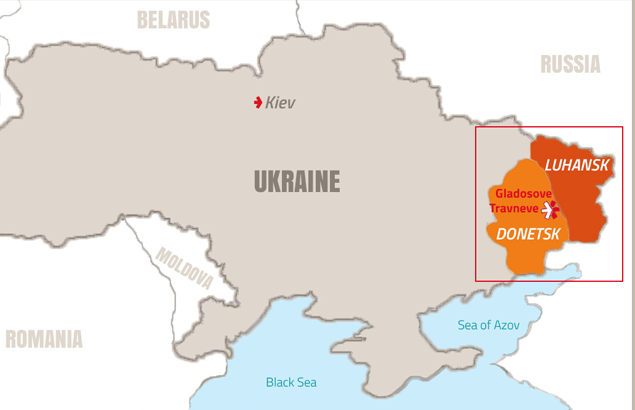 A plight close to the front line

The twin villages of Travneve and Gladosove are located in close proximity to the line of contact. At the end of November 2017 the Armed Forces of Ukraine won back control of these two locations. However, the plight of their inhabitants is very perceptible, with eighty-four residents Travneve and merely thirty-seven in Gladosove. It might be expected that they are given little attention too.

Getting to these two villages is a big challenge itself. Once it rains, mudflows render the road completely impassable. Moreover, cars might be exposed to frequent punctures in light of coal combustions residuals covering some parts of the track.

There are two wells in Travneve, water from which is not potable. According to residents, they use it mainly for technical purposes. Bread and other edibles are delivered twice a week – on Mondays and Wednesdays. The same goes for buses that can be used solely on Tuesdays and Fridays.

Frequent power cuts are another scourge of the conflict. At times people are forced to spend days on end waiting for the electricity supply to be restored. In the meantime, they use gas cylinders that are as valuable as gold.

Travneve and Galdosove’s inhabitants complain of a severe lack of health care services – electrocardiogram (EKG), medical ultrasound, consultations from doctors are very much needed. The International Committee of the Red Cross’s team does visit the villages on a monthly basis. However, more support is needed to respond to the needs of the inhabitants.

To make things worse, the villages get sucked into a vortex of incessant hostilities every night. The only healthcare facility in Travneve is exposed to shootings at night time.

Inna, one of Travneve’s inhabitants, shows pictures of her yard where an unexploded shell landed the other day. According to her, her house would have been completely destroyed had the mine detonated.

Another resident of the village, a forty-five years old woman named Svitlana, has been looking after her bed-ridden mother for four years now. With no reliable access to water, food products and medical help, Svitlana has to fend both for herself and for her mother. Needless to say, the conflict keeps exacerbating the two women’s precarious living conditions.

Five years of the conflict have already left a woeful imprint on people. Mental health and psychological support belong to the category of the most pressing issues that are to be addressed by NGOs.  Facing death every night, Travneve and Gladosove’s residents need to be supported.

Nevertheless, local residents remain resilient under the circumstances. Many of them would eagerly embrace any opportunity of humanitarian assistance in Ukraine to contribute to solving their daily problems.

The case of Travneve and Gladosove is by no means unusual among other settlements along the line of contact. According[1] to the Office of the United Nations High Commissioner for Refugees, a total of 400 000 people are currently living in the “grey zone” along the contact line. 60% of them are those over sixty years old and 16 000 people are bedridden, with 90% of all residents being dependent on pensions from the Ukrainian government. Food, health services (of which mental health and psychosocial support is of great importance), water, mains electricity, and regular transport connection. All of these needs have would are met if the population of the hard-to-reach settlements was to be helped.

Première Urgence Internationale has been working in Ukraine for four years, delivering first aid assistance at the entry and exit crossing points between the government-controlled and non-government controlled areas and supporting the healthcare system near the front line in Ukraine.

With its extensive presence in the field and following its assessment carried out in Travneve and Gladosove in July 2019, Première Urgence Internationale is considering different possibilities to support the local populations in the fields of mental health and psychosocial support, protection assistance and preparation to conflict-related risks, in coordination with other actors.

The mission’s aim is to improve living conditions for local residents and resilience of communities affected by the conflict in localities and hard-to-reach settlements of Eastern Ukraine.

To support our actions in Ukraine, you can make a donation.
94% of donations are allocated to our field missions.