By continuing to use this site, you agree to the use of cookies. Cookies are used to suggest information based on your browsing patterns and to provide us with information about site usage. For more information and to manage these settings, click here
Home > News > SUPPORT TO THE MEDICAL RECEPTION OF MIGRANTS IN ÎLE-DE-FRANCE

SUPPORT TO THE MEDICAL RECEPTION OF MIGRANTS IN ÎLE-DE-FRANCE 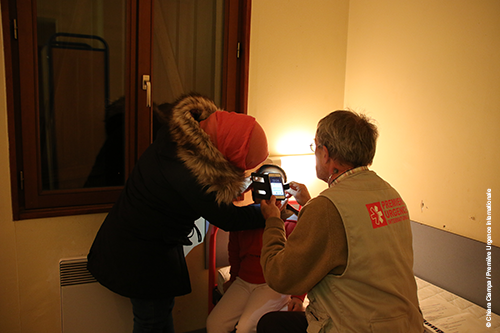 On Friday, at sunrise, after the weeklong evacuation of the Stalingrad camp in Paris, 82 bus have been requisitioned by the police and the city of Paris have transported around 4000 migrants in different shelters in Ile de France.

Following the request of the Direction départementale de la cohésion sociale (DDCS) of the Val d’Oise, a team from Première Urgence Internationale joined on Friday one of the centers, the outdoor activities center in Cercy Pontoise. The staff had already taken action in September 2015 in the same center to help the assistance of refugees arriving from Syria and Iraq. This time, the NGO coordinated with various actors to respond to the arrival of 250 people.

The medical staff of the organization, composed by two doctors, one midwife, one psychologist and differents volunteers, gave out consultations during all the afternoon, to handle the emergency and guide people towards the appropriate structures. Around 30 people asked for medical assistance on site and one pregnant woman was transported to the hospital due to some complications. 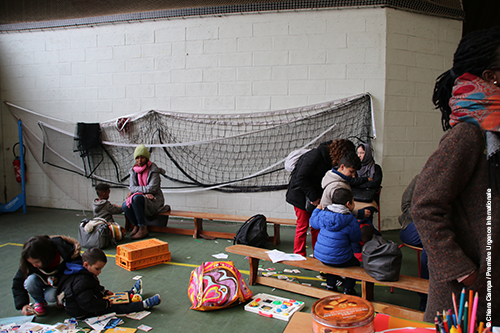 In the outdoor center, families were exhausted by the weeks of unhealthy encampment. The majority were searching for some rest and a warm place to finally get some sleep. Some children exposed to cold temperatures were found to have fever and bronchitis.

People expressed doubts and fears about their uncertain future. Kathera asked impatiently: “Will my daughter receive an education in France? When will she start?”.  Kathera left Afghanistan 6 years ago, with her husband and her 2 daughters, she has crossed Iran, Turkey, Italy and Germany. “My daughter loves French language”, she added. Her daughter speaks 4 languages and helped the staff to communicate with patients by translating.

Najib comes from Somalia and he has lived in Italy where his son Imran, who was “celebrating” his 2nd birthday, was born. “Here I have a friend that told me he found a job as a driver. I would love to do the same“.

Everyone is searching for reassurance, an ear that can listen to them. 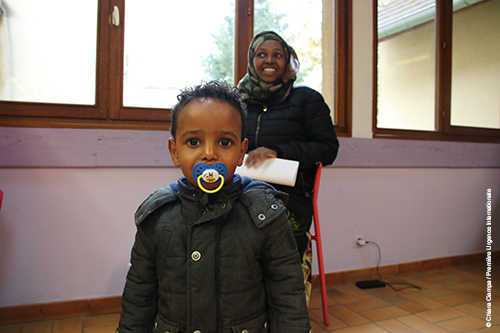 “We hope that this intervention will see future developments”

explains Florence Batori, the person in charge for Mission France.

Première Urgence Internationale works with the most vulnerable people in France, in the departments of Seine Saint-Denis and Val de Marne in the fields of health and towards the integration through Sociolinguistic activities.