By continuing to use this site, you agree to the use of cookies. Cookies are used to suggest information based on your browsing patterns and to provide us with information about site usage. For more information and to manage these settings, click here
Home > News > Première Urgence Internationale breaks down economic barriers of health in Lebanon

In Lebanon, thousands of Syrian refugees and vulnerable Lebanese live below the poverty line, and cannot access primary healthcare services. Première Urgence Internationale is conducting a project to reduce these economic barriers and ensure access to basic healthcare for all patients. 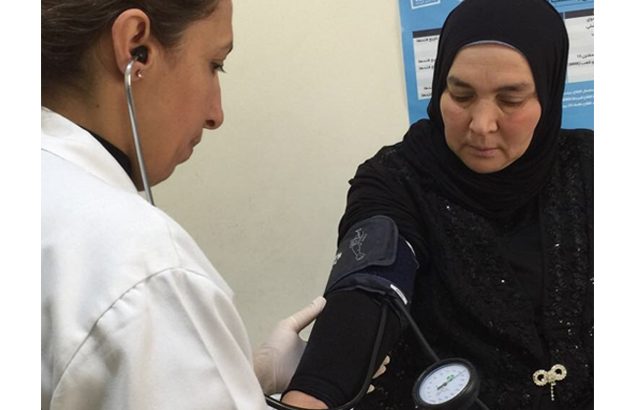 Since the beginning of the Syrian crisis, 1.5 million displaced Syrians have settled in Lebanon. Moreover in underserved areas that are also home to some of the poorest Lebanese communities. 67% of vulnerable Lebanese and 87% of displaced Syrians are concentrated across 15% of the Lebanese territory, according to the United Nations’ VASyR 2017.

These populations have critical needs, particularly regarding healthcare. Primary healthcare is absolutely unaffordable for them, with high costs for consultations and tests. Moreover, the quality of service provision varies widely between different healthcare centers. Consequently, most of Syrian refugees have a negative perception of the quality of care in Lebanon, which lowers their probability to visit a center.

Drawing on this, Première Urgence Internationale, in consortium with other international NGOs, launched a project named REBAHS: Reducing Economic Barriers to Accessing Health Services. Through a financial, logistical and human support. The goal is to reduce the vulnerability of crisis-affected populations, while reinforcing the national healthcare system(1).

A pilot project had been initiated upstream, based on 6 primary health care centers. Thus patients will always pay a flat fee for consultations and medical tests. Première Urgence Internationale could then observe an increase of patients of 41% on average. It clearly demonstrated the urgency of removing economic barriers to healthcare in Lebanon.

The project doesn’t create a parallel health care system, but aims at supporting the existing national one. In that way, Première Urgence Internationale and the consortium of NGOs have the ability to deal with the increased number of patients and support these populations facing crisis.

Meet the needs of the populations

To achieve this, the NGOs firstly provides a financial support. They cover 70% of the cost of the consultation fees (7000 LBP out of 10 000 LBP), and all the costs of laboratory in the healthcare centers supported. All follow-up consultations and diagnostics tests following are then free of charge for the patients.

The support also pays additional salaries in the medical staffs. “We need to make sure that medical doctors and specialists. Such as gynaecologist and paediatrics, are available a sufficient amount of hours to meet the needs of the populations”, explains Clare Shortall, medical coordinator for Première Urgence Internationale.

Première Urgence Internationale also supports running and administrative costs of the medical centers, which face an increased demand from Syrian refugees. It also offers logistical assistance, to avoid shortages of essential drugs and ensure appropriate quality of treatment for all patients.

Finally, Première Urgence Internationale’s medical teams are on the field to provide coaching and supervision to the primary healthcare centers’ staff. The NGO’s teams also conduct awareness campaigns and community health education. The objective is to raise awareness on health services provided by the supported primary health centers.

“I’m very thankful to Première Urgence Internationale and all the efforts it has done up until now for me. It allowed me an access healthcare when I could least afford it, a beneficiary highlights. Since the staff’s first visit, I started to feel that someone cares about my health.”

(1)Read more about the REBAHS project by downloading the presentation sheet here (PDF).

(2)This project has been funded by the European Trust fund for the Syrian crisis (MADAD Fund).