By continuing to use this site, you agree to the use of cookies. Cookies are used to suggest information based on your browsing patterns and to provide us with information about site usage. For more information and to manage these settings, click here
Home > News > Living in Lebanon: destinies and a life story

Living in Lebanon: destinies and a life story

Candice Talleux is field coordinator in Saida, Lebanon. Back from the mission, she tells us about Salma, a young Syrian woman that is living in Lebanon, faced with extreme precariousness. 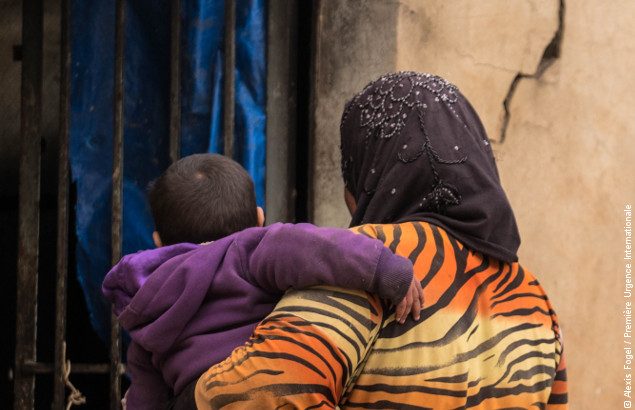 The challenge of living in Lebanon

In Lebanon, the persistent and prolonged crisis and the inaccessibility of basic services for the most vulnerable people are weakening the Syrian, Palestinian and Lebanese populations. Thus, some of them are living in very vulnerable situations.

“I remember in particular the case of a Syrian woman, Salma, whose husband and eldest daughter had remained in Syria”, starts Candice. “In Syria, themselves were in a precarious situation and could not send money to help her. She was alone with her 7 other children -some of them very young- and was pregnant again. Salma could not leave them to go to work, so it was her 15-year-old son who was supporting the family. But that was not enough, and since the family could not afford the rent of the house they lived in, they were at risk of eviction. ”

Première Urgence Internationale relocated the family to an empty dwelling that the organisation had rehabilitated in exchange for a rent reduction by the owner. The teams thought that the family situation would then improve.

The broken destiny of a family

“Some time after the birth, Salma’s child had severe breathing problems and he was hospitalised,” continues Candice. The health system in Lebanon is complex because it is largely decentralised and privatised. This translates into difficulties of access to care for the most vulnerable populations without sufficient financial means. “Salma was heavily indebted to pay for her baby’s hospital expenses, including to the Lebanese owner of her apartment, who personally helped her. Unfortunately, the child did not survive. But the hospital refused to return the body until she had paid off her debts. “

Salma benefited then from Première Urgence Internationale’s emergency cash assistance program. The organisation has set it up in Lebanon for several years now and it allows to pay a total of 400 dollars (320 €) per family. Salma was able to give half of this money to the owner of her apartment who had patiently helped her. The other part was used to reimburse the medical expenses at the hospital.

“This woman is unfortunately not an isolated case”, ends Candice.

A story among many more

This type of case has prompted Première Urgence Internationale to increase its support for Syrian and Lebanese women who are solely responsible for the care of their families. Especially since Syrian refugees are only allowed to have professional activities from home or in specific sectors such as agriculture, construction and the environment. For all these women, it is sometimes difficult to combine work and household chores, especially when they have young children.

Since January 2018, Première Urgence Internationale offers them training courses to learn about good hygiene, food and cooking practices. The ultimate goal is that they generate income for their families from home, by selling their products to their neighbours or by working in small catering facilities.

In Lebanon, Première Urgence Internationale coordinates its aid in the country around three axes. First, it ensures the protection of the most vulnerable populations. Then it gives them access to basic goods and services. Finally, it contributes to securing stable incomes and covering the vital needs of these populations.

Click here to learn more about Première Urgence Internationale’s action in the country.