By continuing to use this site, you agree to the use of cookies. Cookies are used to suggest information based on your browsing patterns and to provide us with information about site usage. For more information and to manage these settings, click here
Home > News > Improving access to safe delivery for vulnerable women in Jordan

Improving access to safe delivery for vulnerable women in Jordan

Thanks to the support of the European Union and the French Ministry of Foreign Affairs, Première Urgence Internationale has provided information and cash assistance to facilitate access to health services for vulnerable households in Jordan. Since June 2018 and up to late August, the program benefited to 1,600 households, i.e 7,321 people, contributing to reduce preventable mortality in the country. 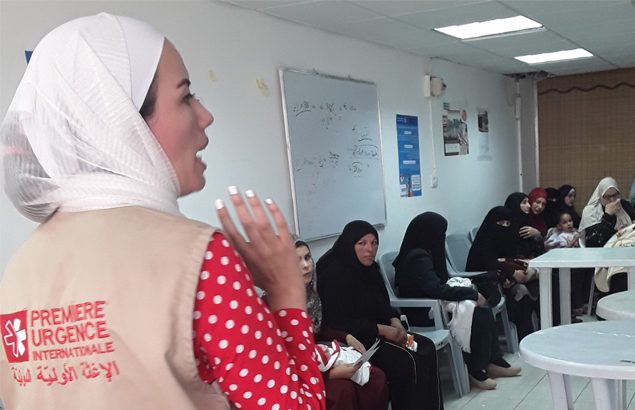 Vulnerable households in Jordan meet difficulties to have access to the health system. The cost of delivery of health services is only partially subsidized by the Jordanian government and are often not affordable. For refugees living in the country, the financial barrier has been particularly problematic recently. They were requested, from February 2018 to April 2019, to pay 80% of the applicable foreigner rate. Syrian and non Syrian refugees with insufficient documentation have a limited access to the public health care system. They might go to private hospitals. Indeed, the cost of a delivery can be up to 3 times higher than in a public hospital.

Facing this reality, Première Urgence Internationale decided to set up a “Cash for health” program. It was possible thanks to the financial support of the European Union and the French Ministry of Foreign Affairs(1). The program has been developed in six governorates of the country, since June 2018. It consisted in cautious selection of vulnerable pregnant women, individual follow-up, conditional cash assistance, and information and awareness sessions. Première Urgence Internationale want to enhance their access to health services and facilitate the delivery.

The objective of cash distribution aims at improving access to the health care system. And especially safe delivery and post-partum care in medical facilities. In order to reduce maternal mortality and negative coping strategies (for example deliver at home, incure unbearable level of debt or sending children to work to afford necessary income for a delivery at the hospital) due to financial and economic difficulties. As a matter of fact, the average income per households within Syrian refugees population in Jordan is around 200 JOD per month. Whilst the average cost of a normal delivery is around 70 JOD. The average cost for a casearian, around 330 JOD. Therefore delivery expenses can represent from 35% to more than 150% ot their monthly income! At the time of project design, prior to Jordanian legal evolution, and until April 2019, the cost of a delivery was even higher: from 150% up to 275% of the households incomes.

The value of the cash assistance is based on the cost of the delivery in identified public or private hospitals in the governorate of intervention, as well as additional expenses for transportation. For women suffering from complication during the delivery, involving extra cost, Première Urgence Internationale covered the difference after delivery on a case-by-case basis.

This enabled so far 864 vulnerable women, 320 Jordanian (37%) and 544 refugees (63%), to acces a safe delivery. They didn’t have to borrow money or to have administrative issues with the hospital. “The conditions of delivery were better at the hospital: I benefited from pain killer, it was cleaner and people were taking care of me and my baby”, a mother highlighted. This 27-year-old Syrian refugee went previously through home deliveries for her previous children. She shared that everything went better thanks to the support she got from Première Urgence Internationale’s teams.

In parallel of the cash distribution, the program also consisted in  providing awareness and information sessions to pregnant women and mothers. In total, since June 2018, 514 men & women participated to sensitization groups, and benefited from information on health services’ available and basic information on health: family planning, contraception, risks of early pregnancy… 255 pregnant women have also benefited from referral to other agencies for different pack of services, such as health (surgery, medication), financial assistance, or documentation and legal assistance.

A 35-year-old Jordanian mother was followed-up by Première Urgence Internationale’s teams after her delivery. The teams discovered that she didn’t have the right information regarding vaccination. Actually, she thought that the vaccine could affect the fertility of her baby. That is why she didn’t vaccinate her new-born nor her previous baby boy. After information and awareness, the NGO’s teams gave her phone calls to follow the case. The woman confirmed she went to the primary health care center in her area, to have her 2 children vaccinated. She thanked the teams for the information given.

(1) These activities have been funded thanks to the joint support of the European Union, through ECHO (Civil Protection and Humanitarian Aid Operations), and the French Ministry of Foreign Affairs, through the Centre de Crise et de Soutien (CDCS).