By continuing to use this site, you agree to the use of cookies. Cookies are used to suggest information based on your browsing patterns and to provide us with information about site usage. For more information and to manage these settings, click here
Home > News > “I taught new values to my children”

“I taught new values to my children”

Whereas the Syrian crisis entered its seventh year, the situation of Syrian refugee’s populations in the neighboring countries remains critical. In Lebanon, the families have no more resources and suffer from a restricted access to healthcare and to basic services. Première Urgence Internationale intervenes in Akkar and helps Syrian refugees by improving their scholar conditions and by offering a psychological follow-up to children and to parents. Amena*, a mother of three children, tells her story. 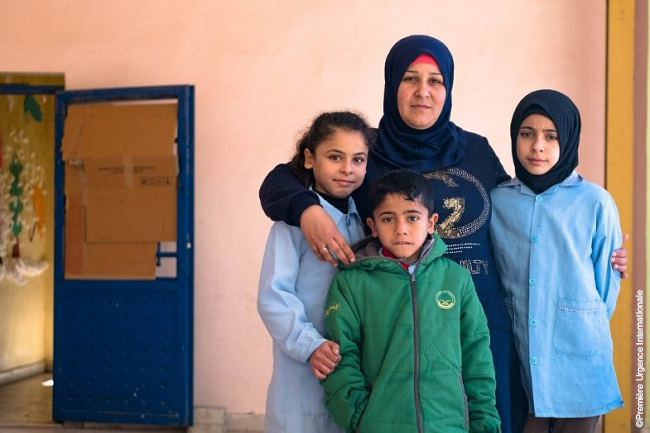 Amena is a mother of three children: Zeinah, Haya and Miran*. All of them are registered in the public school of Chiekh Zanad, a little village located in the poor rural area of Akkar, in the North of Lebanon.

“Before Première Urgence Internationale began to intervene in this school, the director and the teachers told me that my children didn’t obey, that they didn’t participate in class and that they distracted easily. Their grades didn’t improve and I was not satisfied with their behavior. At home, I was very tough with my children to discipline them even so I was not proud of it. I didn’t let my girls go out. I was afraid because we heard a lot of rape issues. Here, in Akkar, young girls don’t go at school for a very long time and stay at home. But one day, I met Taman from Première Urgence Internationale’s Protection team and we discuss many issues. She told me that I could solve many of them with dialogue. First, I didn’t believe it.”

To bring a psychological support to refugees

“When the psychological support sessions were offered at Cheikh Zeinad school, I went to the awareness sessions for pupils ‘parents that are organized every week by the NGO’s protection team. My children also participated to psychological support sessions for children and to recreational activities led at the school by Première Urgence Internationale. I began to forward information and to apply the advices that I had learned during the sessions to my children and to discuss with them at home, to understand them better. I totally changed my behavior and I noticed that my children changed too”.

“Now, thanks to the sessions, I learned that girls are equal to boys. A girl can be a policewoman, she can be an engineer, she can be whatever she wants and even do better than boys. I taught new values to my children and they realized how important education is. Now, they come to me every day before going to bed and tell me:” Mom, we need to talk to you about our day.”

Thanks to the discussion group organized by Première Urgence Internationale, Amena now sees education with a different point of view and uses all her energy to encourage her children to make progress at school. She began to be more implicated in their life, a main point for the psychological well-being of her children.

“I advised all women of Cheikh Zanad to follow the psychological support sessions because children went from school failure to scholar success and they now are the best pupils of the school.”

Since the bursting of the Syrian crisis in April, 2011, Première Urgence Internationale has developed a response to the refugee’s crisis in Lebanon. The NGO is currently leading activities to improve obsolete public infrastructures and low-quality health services in Akkar, a region particularly affected because of its proximity to the Syrian border.

This project is supported by AFD

* the names have been changed