By continuing to use this site, you agree to the use of cookies. Cookies are used to suggest information based on your browsing patterns and to provide us with information about site usage. For more information and to manage these settings, click here
Home > News > “I could not sit any longer, waiting for the time to go by”

“I could not sit any longer, waiting for the time to go by”

In Homs, a city particularly affected by years of crisis, the inhabitants come back in the most affected neighborhoods. Among them, Mr. K., a shopkeeper who could reopen his restaurant thanks to the support of Première Urgence Internationale. We met him. 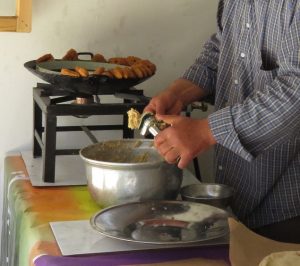 In the neighborhood of Al Tameenat, in the north of Homs, a restaurant runs well: the “Matham Saade”, the restaurant of happiness. It is maintained by Mr. K., a Syrian in his 50s. The store was opened thanks to the action of Première Urgence Internationale and has no competitor one kilometer away. Its first customers are mainly the workers who bustle about the rehabilitation of the neighborhood, and also some former neighbors who come back little by little.

All the constructions located on the frontline during 3 years and that have not been destroyed by combats have been sacked, then burnt.

Mr. K. was one of the last inhabitants to leave Al Tameenat in March 2014. After four years spent in friends’ houses, in group homes, in besieged neighborhoods and in governmental areas over the course of agreements signed between the different actors, he decided to come back with her wife at spring, 2016. “We stayed without electricity for four months in the ruins of our apartment” reports the restaurant owner. The rehabilitation of his housing by the teams of Première Urgence Internationale achieved two months ago.

Mr. K. is proud to work again: “I could not sit any longer in front of my wife, waiting for the time to go by”. In his restaurant, he prepares foul (beans with oil and garlic), hummus and falafels in the shape of a heart.

Mr. K. belongs to a big family in Homs renowned for its fervor at work. Mr. K.worked with three other members of his family in a falafels restaurant near the bus station, on the old road between Homs et Hama. They had to close their shop at the end of 2014 when the road was closed because it leads to one of the numerous fronts that are still active today.

The family of the restaurant owner got deeply affected by the crisis. Two brothers of Mr. K. died in the combats, two of his sisters are now in Europe and two other sisters of him followed their husbands to join Idled in the north of the country during the evacuation of the rebels that was negotiated at the end of the siege of the old town in 2014. Mr. K. has four children, three of them took refuge in Lebanon. Only his younger daughter of 15 years old stayed with him. “She left school when she was 11 years old, I hope she will have the possibility to go back to a nearly normal program at the next start of the school year, Inchallah”. The school of his daughter is one of the buildings that Première Urgence Internationale is currently rehabilitating.

Première Urgence Internationale is one of the limited NGOs authorized to intervene in Syria. The association has had a presence since 2008 and deploys an integrated approach in order to address the multiple needs of the populations that are victims of this crisis at best.