By continuing to use this site, you agree to the use of cookies. Cookies are used to suggest information based on your browsing patterns and to provide us with information about site usage. For more information and to manage these settings, click here
Home > News > Helping Syrian families to move back to their houses

Helping Syrian families to move back to their houses

In Syria, Première Urgence Internationale provides a humanitarian aid to populations victims of the conflict, through an integrated approach. The NGO addresses the needs in water, hygiene, sanitation, and psychological support. It also contributes to improve the conditions of hosting of the displaced populations inside the country. 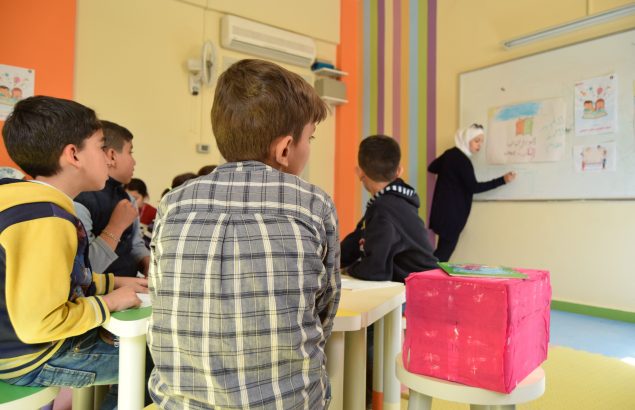 Aleppo City was an active frontline for almost five years, which led to population displacements and massive destruction. Shortly after the ceasefire agreement in late 2016, Première Urgence Internationale obtained access to various neighborhoods within the city. Like Az Ziebdiyeh, a neighborhood located southwest of Aleppo.

Bassem(1) is married and has six children. In 2013, he was forced to leave his home and business, and remove his children from their school. His home was situated nearby the emerging frontline. For five years, Bassem and his family were displaced within Aleppo. To earn money, he established a small cart to sell food and drinks

In mid-2017, no longer able to afford renting an apartment, the family decided it was better to move back to their apartment. Bassem and his family went back to their home and found that it sustained heavy damage: no windows, doors, piping, electrical outlets or wiring… Nothing which resembled their previous home. But at least the building was still structurally sound.

Bassem and his family were selected as beneficiaries of the shelter rehabilitation program.  “Thanks to Première Urgence Internationale, my family and I were able to move back to our house. This means a lot to me, especially because I grew up in this area”, Bassem expressed.

In the family, four school-aged children had been enrolled in formal education prior to the escalation in Aleppo. Between moving homes, interruptions to classes due to the security situation, and the psychological effects of living within the context, these children started to face challenges with their education, to the point of being at high-risk of dropping out completely.

The teams of Première Urgence Internationale observed this trend amongst many of the children returning to Az Ziebdiyeh. They worked with the Ministry of Education to launch remedial classes, to give the children the space and specialized attention to improve their performance in school.

Bassem – like many returnees to Az Ziebdiyeh – also found his grocery shop completely destroyed, with all of the furniture and assets removed and severe damage on the interior of the space. As Bassem and his family were being supported by humanitarian aid in Syria, friends and relatives. He did not have the income to spare to rehabilitate his shop and re-start his business.

After developing a new business plan, Bassem was selected by Première Urgence Internationale to receive a small business project to re-establish his grocery shop and begin the path towards re-establishing self-sufficiency. “Thanks to the small business grant, I managed to reopen my shop. Thus, I no longer needed anyone’s help, and my income is enough to provide for my family.”

Two years later, Bassem and his family are still residing in Az Zebdiyeh. The four children are enrolled in formal education, and the father’s business is now able to employ other workers from the neighborhood. Thus, generating income and reducing reliance on humanitarian assistance.

(1) For reasons of security, all names have been changed.

To support our actions in Syria, you can make a donation. Your donations ensure our freedom of action, and allow us to increase our responsiveness.