By continuing to use this site, you agree to the use of cookies. Cookies are used to suggest information based on your browsing patterns and to provide us with information about site usage. For more information and to manage these settings, click here
Home > News > Gaza farmers encouraged to use solar energy

In the Gaza strip, farmers face difficulties to cultivate their lands, due to lack of access of water and electricity. Première Urgence Internationale equipped water-wells with solar panels and submersible pumps, to provide farmers with irrigation water. 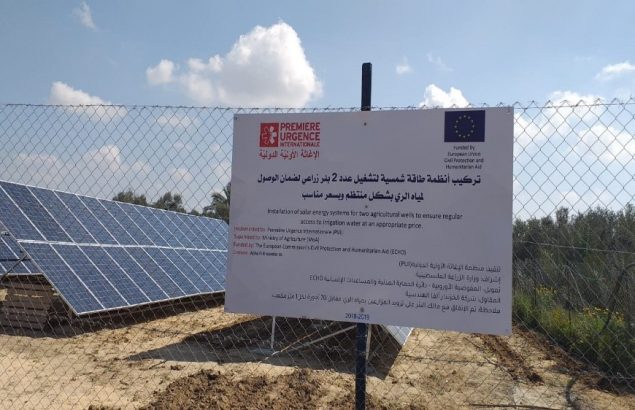 The prolonged conflict between Israel and the Palestinian Occupied Territory still affects today the condition of living of Palestinian populations. In the Gaza strip, the consequences of the war and the economic blockade greatly impact the means of living of the civilians.

Since 2009, Première Urgence Internationale intervenes in emergency in response to the humanitarian crisis, thanks to distribution of non-food items, water supply, cash support for the most vulnerable families and rehabilitation of arable land. The aim of the intervention is to maintain and improve the food security and the means of living of the most vulnerable populations who are directly affected by the conflict.

Supporting farmers in their work

In the past years, many farmers in the Gaza strip have seen their crops affected by the acute lack of access to water, caused by the electricity crisis, as well as heightened temperatures experienced during summer. According to the Palestinian Ministry of Agriculture, in 2017, up to 60% of the demand for water was unsatisfied, due to electricity outages during summer.

Première Urgence Internationale’s teams met Ahmad, a farmer living and working in the Khan Younis governorate, in the southern Gaza strip. Already in 2016, Ahmad saw his zucchini crop entirely lost, due to the lack of water. He then tried to cultivate only some low-revenue, rain-fed seasonal crops, such as wheat and barley. These crops only depend on rain water and are usually used for family consumption.

But Ahmad, like many other farmers, also faced other difficulties to work. His land, located 500 meters from the border fence between the Gaza strip and Israel, is located inside the so-called “Access Restricted Area” (ARA). Meaning that he puts his life at risk when going to his crops at night, in the very early morning, or in foggy weather. These risks include exposure to fire from the Israeli soldiers, attacks by stray dogs, as well as potential arrest and interrogation by the Palestinian security forces for entering this sensitive area.

In the framework of the Gaza Partnership Action, Première Urgence Internationale equipped two water-wells with PV solar panels. Both facilities, located in the Khan Younis governorate, inside the ARA, have a submersible pump. The aim of this intervention is to provide farmers with irrigation water on a regular basis, and at reduced prices, to mitigate the effects of the acute electricity crisis. Currently, at least 170 farmers are benefiting from the two water wells and now have regular access to irrigation water.

Ahmad’s lands are now connected to the water wells: “Thanks to the intervention of Première Urgence Internationale, I can now irrigate my crops with the proper amount of water. I resumed the cultivation of profitable crops such as zucchini, okra, and Armenian cucumber. I expect a good increase in the yield as well as the revenues, at least 40%.” Besides, thanks to the support of the NGO, he no longer faces threats to his life when irrigating his crops. “This intervention helps farmers to avoid protection risks, overcome agricultural challenges and enhance the resilience of their businesses”, he commented.

These activities have been funded thanks to the support of the European Commission’s Humanitarian Aid and Civil Protection (ECHO).