By continuing to use this site, you agree to the use of cookies. Cookies are used to suggest information based on your browsing patterns and to provide us with information about site usage. For more information and to manage these settings, click here
Home > News > France: Mental health at the heart of the mission’s interventions

France: Mental health at the heart of the mission’s interventions

The France mission of première Urgence Internationale integrates mental health and psychosocial support (MHPSS) in all its actions through individual or group accompaniment, in the integration center or in the beneficiaries’ living areas.

People living in squats and slums live in extreme precariousness: access to water, electricity, and even to food are difficult and these living conditions put a strain on their physical and psychological health. Exposure to various forms of violence linked to living conditions or multiple forms of discrimination, increases stress, anxiety and the risk of depressive disorders in people who have already had a difficult life.

Faced with this situation, Première Urgence Internationale‘s France mission, located in Montreuil in Seine-Saint-Denis, is developing psychosocial support for its beneficiaries, foreign people residing in France with a residence permit. It all started in 2019, with the implementation of individual interviews, group workshops, and sponsorship with volunteers for the beneficiaries of the insertion center (which was then located in Ivry-sur-Seine). In this center, courses in French as a foreign language and socio-professional support are also offered. 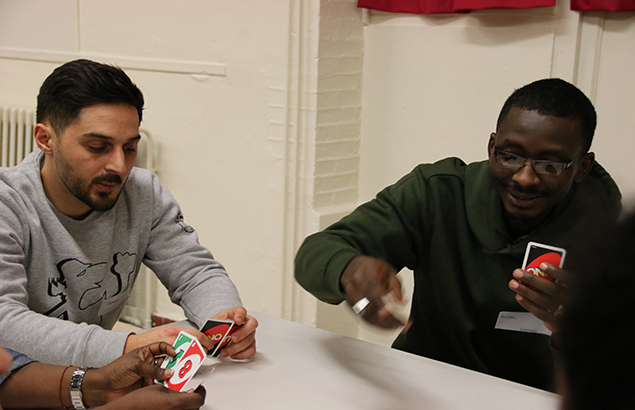 A situation complicated by the COVID-19 pandemic

“The health crisis has exacerbated the vulnerabilities already present in the beneficiaries we support. People who were previously identified as very vulnerable now see their situation deteriorate even more, as the need for health care support, on a somatic and/or psychological level, is increasingly important“, deplores Léa Dumas, Health Project Manager.

This is why, since March 2020, a psychologist has been working in the squats and slums of Val-de-Marne and Seine-Saint-Denis.  Accompanied by a Romanian-speaking health mediator – the majority of slum dwellers being of Romanian origin – she visits these places and offers awareness-raising sessions on mental health as well as individual interviews.  Those who request it can then benefit from regular support in the premises of the integration center in Montreuil or in their place of living. In addition, since 2021 a psychosocial support service is open to all, by appointment, once a week, in the integration center.

«  We want to create more and more links between the interventions in the living areas and those carried out at the integration center,” explains Léa Dumas. For example, the mission’s psychologist can interview in the field and a mediator accompanies the person to the integration center. In this way, the person can find out where he or she is and go there to continue his or her support and take advantage of all the help we can provide.

In addition to those encountered directly by the psychologist in the living areas, people in psychological distress can be referred to Mission France in different ways. Some are identified during the social and professional support sessions or during the French as a foreign language courses given by the mission. Others are referred by partner organizations. Finally, word of mouth works among beneficiaries who can advise other people and invite them to join the program.

Girls and women: a population that attracts the mission’s attention

« Among the people identified as being particularly vulnerable, girls and women are the focus of our attention in the places where they live: young mothers, single mothers, pregnant and breastfeeding women,” explains Léa Dumas. Their specific needs include sexual and reproductive health, support during pregnancy, post-partum and parenthood, gender-based violence, etc. It is essential to be able to offer a neutral, safe space, adapted to the interviews.

In 2021, nearly 70% of the beneficiaries of this mental health support are girls and women. The mission organizes other activities specifically for them, such as sexual and reproductive health awareness (transmission of sexually transmitted infections, means of protection and conception, prevention of early and unwanted pregnancies). In October, the first awareness-raising campaign on menstrual insecurity will take place, with the distribution of kits containing menstrual panties and disposable and washable sanitary napkins. “The objective is not limited to the distribution of the kits, but to set up a real work of information. We will give them time to test the periodic protection and will regularly review the situation with them,” says Léa Dumas. About twenty women met in the places where the mission works are targeted by this project, which shows how the mission constantly renews its actions in order to respond as closely as possible to the needs of the beneficiaries.