By continuing to use this site, you agree to the use of cookies. Cookies are used to suggest information based on your browsing patterns and to provide us with information about site usage. For more information and to manage these settings, click here
Home > News > FATI, TRADITIONAL BIRTH ATTENDANT IN A CONFLICT ZONE IN NIGER

FATI, TRADITIONAL BIRTH ATTENDANT IN A CONFLICT ZONE IN NIGER

In August 2021, Première Urgence Internationale conducted a training course in the district of Torodi, Tillabéri region, for traditional birth attendants to raise their awareness about obstetrical dangers and the importance of having qualified medical personnel accompany women during childbirth. Our teams met Fati, a traditional birth attendant, who has since benefited from our support in her daily activities. 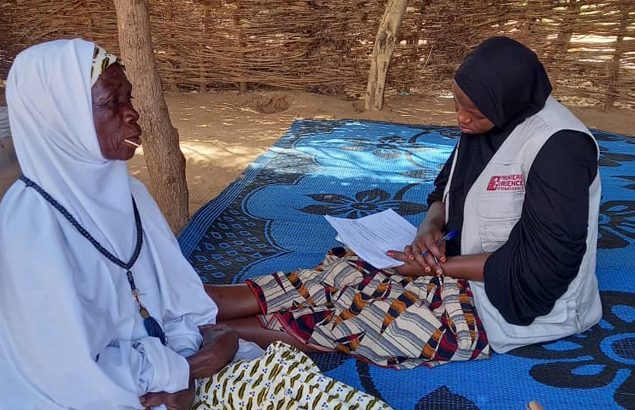 Fati introduces herself as Hama’s daughter. Originally from the Torodi district in the Tillabéri region, this mother of ten children, aged around sixty, is worried about her future: she still provides for her family alone with the help of her elder sons since the death of her husband, but fears the deterioration of the security situation in her village.

The Tri-border region, close to Burkina Faso and Mali, is indeed at the heart of the Sahel crisis. Already plagued by community tensions, the Sahelian zone was destabilised in 2012 following the insurgency in northern Mali by non-state armed groups. The crisis has since spread to Niger and the civilian population is the first victim of the abuses committed by these groups: theft of livestock, burning of granaries and houses, destruction of schools and health centres, explosion of mines, and assassinations.

Torodi is one of the areas targeted by the actions of radical armed opposition groups. Although the village of Fati has not yet been affected by armed actions, security issues remain.

The consequences are significant: Fati can no longer carry out the activities she used to do because of the insecurity, and therefore has less income to support her ten children. In addition to being a traditional birth attendant, she used to make pottery from clay that she collected outside the village, gather wild fruits and gum arabic, and collect firewood to sell later.

Fati also used to cultivate cabbages, lettuce and groundnuts, but she was unable to go to the fields last year because of the security risks: “Now the bush is not ours anymore and we cannot go far from the villages”. This loss of income has had a direct impact on her daily life and that of her family: this mother of ten children had to rely on the help of her relatives to buy food or clothes and could not hope to have access to a certain level of comfort: “I need money to marry my daughters: I would like to give them cups and loincloths so that they look good, but unfortunately I don’t have enough money!”

But Fati is not complaining, her situation is better than that of other women: for the past few months, she has been participating in the activities of Première Urgence Internationale in her commune as a traditional birth attendant. She learned this profession at a very young age by following her grandmother, a traditional birth attendant who was very well known in her community. When she died, the villagers called on Fati and she put the family knowledge into practice.

In August 2021, she took part in a three-day training course organised by the NGO in Torodi on childbirth, danger signs during pregnancy, the onset of labour, the importance of prenatal consultations and the importance of referring women for medical and obstetrical support during childbirth in health centres, while many women still give birth at home and without assistance. This training now allows her to have a better standard of living for herself and her family: “The project gives me bonuses to accompany pregnant women to the health centre for delivery. This money allows me to buy food and I was able to build a chicken coop”. 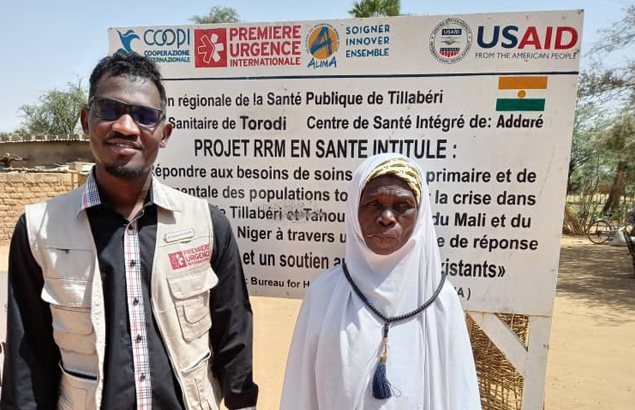 Fati explains that she has improved her knowledge of “white people’s methods” of conducting deliveries. Première Urgence Internationale’s approach aims to bring together traditional approaches and modern medical practices in order to best support pregnant women. Before, she was the one who was called to accompany women during their delivery at home. And she applied the traditional methods:

“If the remnant of the child [the placenta] didn’t come out during delivery, I would pour dry pepper on coals and make the woman smell the smoke and cough until it came out,” Fati explains.

If this technique did not work, Fati would massage the umbilical cord with ash three times and then pull. To cut the umbilical cord of a baby, she used millet stalks. Four if the newborn was a boy, three if it was a girl. Then the cord was left as such and had to dry until the baptism. A method she has now replaced in favour of another: “But I learned during the training how to cut the cords and tie them with thread to prevent the baby’s blood from running out”.

Today, Fati encourages women to go to a health centre to give birth and only accompanies them during their delivery when they are in labour: “Even yesterday morning I found a pregnant woman who was sick. I accompanied her to the health centre and today, when I went to her house, she was much better”. She also raises awareness in her community about the dangers of pregnancy and childbirth.

She also talks to the fathers and husbands of pregnant women: according to her, men need to understand the dangers of childbirth as they are the ones who make the decision to bring their wives to the health centre.

As a traditional birth attendant now involved in such activities, she confirms that her role in the community continues to be recognised not only in her village but also in neighbouring villages. She says she is satisfied when she talks about the consideration she receives: she is given a prominent place and gifts at parties organised by the women she has assisted.

This financial support is all the more important to her as she worries about future hunger. “We are very concerned about the insecurity and if it continues, hunger will bother us because we can no longer cultivate our land,” she says.

This project is supported by the Office of Humanitarian Assistance of the U.S. Agency for International Development (USAID).