By continuing to use this site, you agree to the use of cookies. Cookies are used to suggest information based on your browsing patterns and to provide us with information about site usage. For more information and to manage these settings, click here
Home > News > EMERGENCY FOOD AID – A TASK THAT NEEDS A SAFE PAIR OF HANDS

The United Nations estimates that in 2017, six million people require emergency food aid. One of the tools that Première Urgence Internationale uses to help those in need is assistance in the form of food distribution. 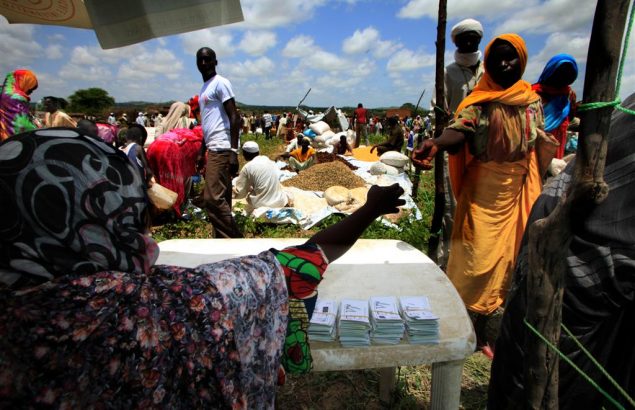 Some got here at dawn this morning. Their documents in hand, they have been waiting for hours in the village square. They will be given food rations that will feed their family for the next four weeks. It’s a vital lifeline. Today, Première Urgence Internationale teams are welcoming, registering and distributing food rations to 15,000 people. Tiredness and long waits can cause tensions to rise on days like this. Teams have to be fully prepared to provide emergency food aid.

Preparation starts well before the actual distribution with a crucial step: identifying the people who will receive emergency food aid. Distribution takes place outside or within camps. Teams work with the local traditional or institutional authorities as well as with a range of communities to identify the future beneficiaries of the food aid. Specific days and times are then determined in tandem with the populations in question.  “This is a very important stage, as there can be tensions between certain communities, which means that we can’t serve them at the same time,” explains Claire Allard, food security coordinator at Première Urgence Internationale.

2100 CALORIES PER PERSON PER DAY

The working method used is very strict. To determine the basic food ration to be distributed, the teams follow the humanitarian standard of 2,100 calories per person per day, amended based on the beneficiary’s age, specific requirements, and living environment. “As well as the basic ration, depending on people’s vulnerabilities, we can provide enriched flour or other additional food items in response to specific deficiencies,” adds Claire Allard. 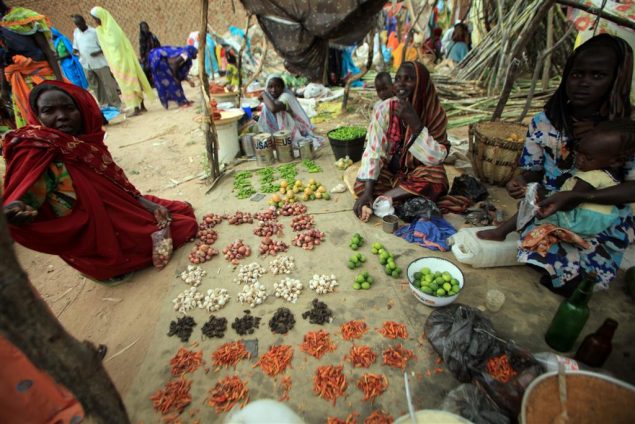 On site, it is also important to adapt to the local market. Food from local shops is distributed whenever possible and excessive distribution is avoided so that no harm comes to the region’s economy – i.e. local merchants who sell their products.

NOTHING IS LEFT TO CHANCE

Another criterion to take into account is how the beneficiaries will transport and store the food rations they are given. For example, during the rainy season, if they do not have shelter, they will not be able to store food properly. In this case, teams distribute rations more frequently.  On the other hand, “if they live a long way from the distribution site, we try to give them as much food as possible at once”. 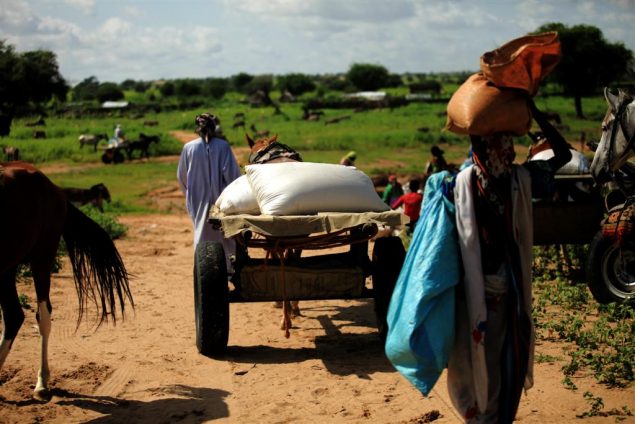 Emergency food aid isn’t thrown together at random. On the day of distribution, nothing is left to chance. Upon arrival at the distribution site, people go to the waiting area. Queues form in front of each table. Long lists of names, signatures and fingerprints are carefully stored in cardboard boxes. Bags of food are piled on tarpaulins and in improvised tents. Each member of the Première Urgence Internationale team fulfils a very specific role during the day –  checking documents, ticking names off a list, distributing rations, managing the crowd and preventing crowd control problems. “All of this work is highly repetitive. We try to make food distribution as human a process as possible,” explains Claire Allard.

FOOD IS A WEAPON

“You’ll never hear anyone tell you that they prefer being given food over farming their own land or working to feed their family,” adds Claire.

Properly conducted emergency humanitarian aid is essential to prevent social crises and avoid suffocating the local market. These risks require careful analysis before fieldwork takes place. Food programmes need to take a wider view of the geopolitical context and of the involvement of various stakeholders in the field. As Claire Allard sums up: “Food is a weapon!”.