By continuing to use this site, you agree to the use of cookies. Cookies are used to suggest information based on your browsing patterns and to provide us with information about site usage. For more information and to manage these settings, click here
Home > News > Culture as a driver of sustainable development of the Gaza Strip

Culture as a driver of sustainable development of the Gaza Strip

The siege and the successive Israeli onslaught on the Gaza Strip over the past fourteen years, constitute a major risk of destruction of the Palestinian historical heritage, as well as the loss of its cultural identity. 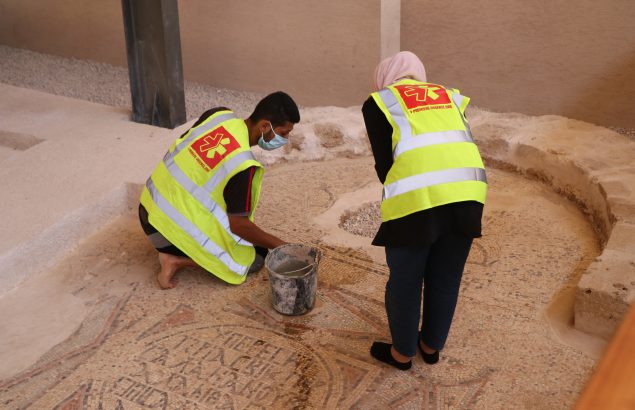 The civilians are the direct victims of the blockade: they have to overcome the psychological trauma caused by the attacks and demonstrate a significant capacity for resilience in order to regain a balance in their lives and a more stable economic and social situation.

Operational in the Gaza Strip since 2009, Première Urgence Internationale has developed several projects to rehabilitate buildings damaged by the bombings. Following the bombings of May 2021, the humanitarian organization is implementing an emergency response to support displaced families, provide psychosocial support and allow access to basic services for the population of Gaza.

The INTIQAL 2030 programme was born in December 2017.  The Arabic word Intiqal means “transition” or “transmission” in English. It was chosen to express moving forward from just maintaining Palestinian heritage to benefiting from it socially, spiritually, and economically.

INTIQAL 2030 is an innovative way of enhancing protection in the occupied Palestinian territory (oPt) by heritage-driven interventions with a purpose of strengthening the social fabric and mental health of Gazans through rehabilitation of archaeological sites.

This project is part of an integrated approach aiming at meeting the essential needs of the population, but also to find the means for its social reconstruction. INTIQAL is a Youth-led program that leverages on the protection of Cultural Heritage involving communities and local civil society, encouraging their interaction on archaeological sites.

A precious heritage in the Levant to protect

Restoration works have been implemented at two archaeological sites in the Gaza Strip: the Tell Umm el-‘Amr (Saint Hilarion Monastery) and the Byzantine Church in Jabaliya.

Discovered in 1997, the Monastery of Saint Hilarion is considered one of the largest (14,500 m2) in the Middle East. Its construction spans a large period ranging from the Roman period IV century to the Abbasid period IX century. Its foundations are considered some of the oldest in the region because initiated by Hilarion, the “father” of Palestinian monasticism. The Monastery is divided between an ecclesiastical part in the South, reserved for religious ceremonies, and a second area in the North, with baths and a hostel accessible. The size of its crypt is unparalleled in the Levant.

In the late 1990s, during the paving of Salah al-Din Regional Street in the Gaza Strip, the remains of the Byzantine Church, which dates back to 444 AD, were discovered. The building stood in an ancient cemetery at the outskirts of Gaza on the road to Jerusalem. A wealthy family had established a sanctuary in memory of its deceased.

The church was built following the ancient Basilica architecture consisting of three naves and communicating with a chapel where the believers came to offer oil and garden goods for the family in charge of the shrine. A large baptistery with four rooms indicates the high religious importance of the site for pilgrims. The three buildings (churches, the chapel and the baptistery) are still paved with 400 m² of high-quality colourful mosaics. The archaeological remains reveal a great economic prosperity in Gaza Strip in the 6th century.

With the seventeen scripts in Old Greek inscribed on the mosaic pavements, the Byzantine Church in Jabaliya is considered one of the principal church in the Levant,

Enjoy a virtual tour of these splendid sites by watching the 360-degree video below.

The INTIQAL program sets in motion a virtuous circle by linking the themes of heritage preservation, long-term economic development, and cultural and social development, allowing multiple benefits in terms of sustainable development, strengthening the resilience of local populations and the promotion of Palestinian cultural heritage at local and international levels.

INTIQAL is part of Première Urgence Internationale’s efforts to advocate for culture in sustainable development. The programme contributes to the monitoring, collection, and analysis of quantitative and qualitative data in the field of culture, increasing culture’s visibility for implementation of the 2030 Agenda for Sustainable Development – ensuring that no one is left behind.

This program is funded by: