By continuing to use this site, you agree to the use of cookies. Cookies are used to suggest information based on your browsing patterns and to provide us with information about site usage. For more information and to manage these settings, click here
Home > News > Continued support required for the Gaza Strip

Joint statement – Première Urgence Internationale is part of the over 80 INGO members of AIDA, and takes part of the call on the Government of Israel to end all collective punitive measures against the civilian population of the Gaza Strip. Read the joint statement. 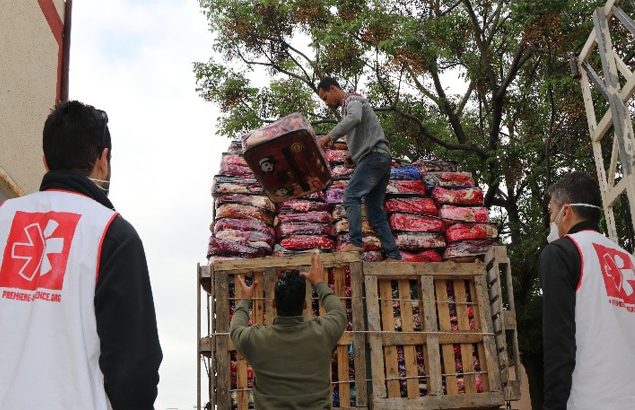 The Gaza Strip is battling an epidemic with almost no resources. For the first time, Covid-19 cases have now been detected in the community. Gaza’s existing deep and protracted humanitarian crisis now threatens to intensify rapidly, jeopardising the health and safety of two million people.

The first Covid-19 cases outside quarantine centres in the Gaza Strip were recorded on August 24. In response, Gaza authorities immediately locked down the entire Strip. Since then, further cases of community transmission have been confirmed across Gaza, including in three major hospitals, suggesting that the infection has been spreading for some time. According to Ministry of Health figures, 697 cases have been identified, over 500 in the last week alone, and four Gazans have already died.

The rise of Covid-19 cases in the general population of the Gaza Strip comes alongside the shutdown of Gaza’s sole power plant on 18 August 2020. Following the most recent escalation in hostilities between Gaza and Israel, Israeli authorities suspended fuel supplies to Gaza and closed the Kerem Shalom goods crossing, the Strip’s essential ‘lifeline’. According to the Gaza Energy Authority, the power plant shutdown increased the Strip’s electricity deficit to 75 percent, left Gazans sweltering in the summer heat, at home in lock-down, with less than four hours of electricity each day.

On a positive note, Israel and Hamas reached a Qatari-mediated ceasefire deal, on the last day of August, which includes reopening the border crossing and fuel deliveries. These steps will resume the operation of critical infrastructure in the Strip, including wastewater treatment and desalination plants which underpins access to clean water and sanitation. The continued freedom of movement at the Kerem Shalom crossing is a must to ensure the ability of the Strip to combat the spread of the virus.

With an already fragile health sector, Gaza suffers from an alarming lack of essential medicine and basic medical equipment, severely impacting its ability to adequately respond to the Covid outbreak. The World Health Organization (WHO) has reported that Gaza’s hospitals, which serve a population of two million, currently have capacity for only 350 Covid-19 patients.

The halt of coordination between the Palestinian Authority and the Government of Israel on 19 May directly impacted the health referral system that Gazans rely on for life-saving medical treatment unavailable in the Strip, including oncology and complex surgery. According to WHO’s reports, 1,641 patients in Gaza were able to leave the Strip for medical treatment outside in January 2020. In June, only 119 exited – an alarming 93 percent reduction. With Covid-19 spreading in the community, including inside hospitals, there are even greater concerns for the health of critically-ill patients in Gaza if access to treatment outside is not restored without further delay.

The Association of International Development Agencies (AIDA), on behalf of its over 80 INGO members, calls on the Government of Israel to end all collective punitive measures against the civilian population of the Gaza Strip. We urge the Government of Israel to work together with the Palestinian Authority and the Hamas authorities in Gaza to respond swiftly and effectively to prevent the spread of Covid-19 in Gaza, reinstate the health coordination mechanism for critically ill patients to access treatment outside the Strip, and bolster the provision of supplies to Gaza hospitals.

AIDA also calls on the international community to publicly assert that responses to the Covid-19 epidemic should be grounded on the fundamental right to access the highest attainable standard of physical and mental health, without discrimination, and on respect for international humanitarian and human rights law and equality of access to health services.

30 November 2022 |  Publications
This edition of La Chronique looks at the anxieties of Ukrainians facing this winter as an estimated 30% of the country's energy infrastructure has been damaged. You will find our photo essay on the millions of internally displaced people in Ukraine, most of whom are temporarily housed in collective centers in different regions.
All publications
Follow @R_2_P_H