By continuing to use this site, you agree to the use of cookies. Cookies are used to suggest information based on your browsing patterns and to provide us with information about site usage. For more information and to manage these settings, click here
Home > News > Measures to protect the population in the West Bank from settlers’ attacks

Palestinians in the West Bank are regularly exposed to settlers’ attacks. Première Urgence Internationale implements projects in the north of the territory in order to protect the population when such episodes occur. Ein ar Rashash, a village particularly targeted by settlers, benefits from the support of the team. The inhabitants notice today a real improvement. 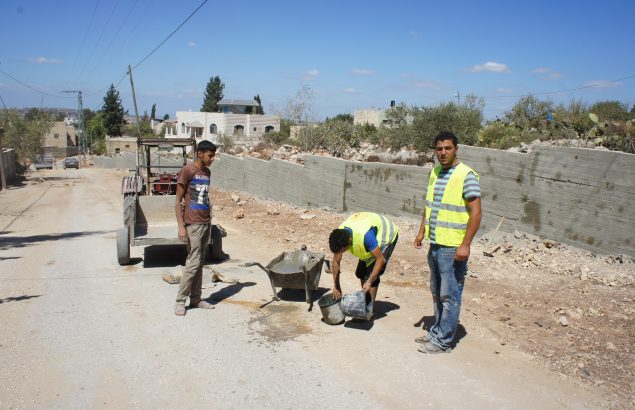 Sami and Fatmeh live with their children in Ein ar Rashash, a village in the West Bank situated in the Ras at Tawil valley (known by Israel as Shilo valley), between the cities of Ramallah and Nablus. The villages of this region are regularly victim of settlers’ attacks, as they are very close to a high number of settlements and fast-growing outposts. Houses at the edge of these villages can be as close as 200 meters from a settler’s house. These attacks go from acts of intimidation to physical aggression and damage of property and crops. As a consequence, measures to protect the population in the West Bank from settlers’ attacks are necessary.

PROTECTING THE POPULATION IN THE WEST BANK FROM SETTLERS’ ATTACKS

« Settlers are pushing us to leave », says Sami. « We are grappling with them continuously. They prevent us from accessing our land, they steal our sheep. They follow our children to school. They project lights on our tents at night while singing and dancing ». These acts of violence and intimidation have repercussions on these families’ livelihoods, provoking substantial economic losses. « Last year, I took on a debt to be able to buy fodder, because settlers were preventing us from using the wells and grow barley », explains Sami.

The head of the Village Council and the members of the Community Eye Watch warn the team of Première Urgence Internationale’s office in Nablus every time that an accident takes place. The technical and the protection team meet up right afterwards to evaluate whether to intervene and how, in order to support the affected family. For certain cases, the intervention is put in place in coordination with other NGOs with a complementary expertise. The common objective is to protect the population in the West Bank from settlers’ attacks.

It was the case for the households of Sami and Fatmeh’s village, who, after an evaluation of the situation, received from Première Urgence Internationale and other NGOs a generator, a lighting system, two water tanks and fences to protect their land and cattle.

Fatmeh comments on the changes brought by these interventions: « Our daily life improved since the water tanks are now only a few steps away from our tent. Beforehand, we had to get water from a well in the land, exposing ourselves to attacks from settlers living next to the field. Settlers used to come close to our tent at night to throw objects at us and intimidate us. We were hiding inside to watch the children. Since the lighting system has been installed, they no longer come at night. Furthermore, thanks to the generator, we can recharge our mobile phones, and call for help if necessary ».

Première Urgence Internationale intervenes in the north of the West Bank, occupied Palestinian territory, since 2002. The projects in protection include: