By continuing to use this site, you agree to the use of cookies. Cookies are used to suggest information based on your browsing patterns and to provide us with information about site usage. For more information and to manage these settings, click here
Home > News > When the need to act quickly conflicts with a long-term deep crisis

Across the world, armed conflicts, natural disasters and sudden population migration can trigger a state of emergency and a consequent humanitarian intervention. But an ‘urgent’ crisis can also arise during a conflict that has been going on for 30 years.

This is the paradox of a country such as Afghanistan, where the need to act quickly conflicts with a long-term deep crisis. And this is why, after 38 years of helping to improve medical services in Afghanistan, Première Urgence Internationale has opened an emergency department and created a coordinator position for the mission. The aim? To increase our ability to intervene and address the growing humanitarian need. 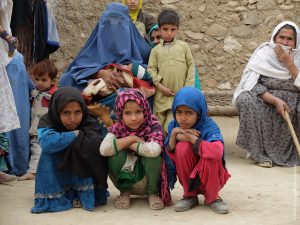 Elise Ponson, emergency coordinator in Afghanistan, has worked on the emergency response to the flows of internally displaced persons and returnees from Pakistan to the east of the country.

“I’ve spent 13 months in Afghanistan. Firstly, I spent nine months as an area coordinator in Daykundi in the centre of the country, where my projects included establishing primary healthcare services across the province (39 health centres). I then spent five months working as an emergency coordinator between Kabul and Jalalabad.”

The role of an emergency coordinator, Elise explains, consists in monitoring teams’ work and ensuring that programmes run smoothly and comply with standards in order to achieve an effective response. The biggest difficulty in the job is security. And in a country like Afghanistan, it’s important to remember that just three or four out of the 34 provinces are considered ‘safe’. In a complex emergency situation, charities are faced with varying degrees of difficulty when accessing certain areas and reaching those who are most affected by the crisis. These limitations are also coupled with political risks. Relationships with the authorities are one factor that must be taken into account, especially if the organisation, such as Première Urgence Internationale, states that it is apolitical. Unfortunately, aid in Afghanistan is highly dependent on this factor.

The effectiveness of an emergency intervention also depends on the ability to provide a quick response, on flexibility, on manoeuvrability, and on rallying public opinion.

In this context, Première Urgence Internationale launched two urgent projects: a health project and a multi-sectoral project1. In Nangarhar and Kunar provinces, mobile clinics help to provide healthcare and psychological support to the people.

Over 26 days of work, the teams from Première Urgence Internationale were able to organise 15 00 high-quality primary consultations each month, equivalent to 57 consultations per day.

As Elise reminds us,

healthcare is central to Première Urgence Internationale’s mission in Afghanistan, but the multitude of needs from populations experiencing crisis situations requires a broader emergency response that also covers mental health. 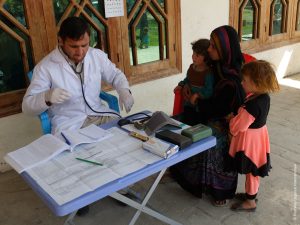 Stripped of their dignity and decent living conditions, displaced people and returnees often suffer from mental illnesses. Coupled with this, the trauma caused by violence and sudden displacement, especially among women and children, can result in complications that require specific treatment.

In the Kunar and Nangarhar provinces, Première Urgence Internationale has implemented psychological support services in coordination with the ministry’s mental health department. The service is available via mobile clinics, where a psychologist can carry out screening, provide advice, and direct the patient to a specialist. As mental health is too often overlooked, our teams are working to raise people’s awareness of the issue through campaigns.

Mental health first aid is a training programme where teams explain to adults and children that they all have within them the tools and resources needed to emerge from their negative situation,

This first point of contact is a decisive step in treating patients. However, some trauma require long-term treatments along with significant support. As Elise explains,

the best solution would be to have a facility for psychological consultations.

Unfortunately, Afghanistan’s healthcare system is not currently able to deal with the issue because of social prejudices and a lack of local professionals.