By continuing to use this site, you agree to the use of cookies. Cookies are used to suggest information based on your browsing patterns and to provide us with information about site usage. For more information and to manage these settings, click here
Home > News > TREATING DISPLACED PEOPLE IN SALAMIYAH – A RACE AGAINST TIME

TREATING DISPLACED PEOPLE IN SALAMIYAH – A RACE AGAINST TIME 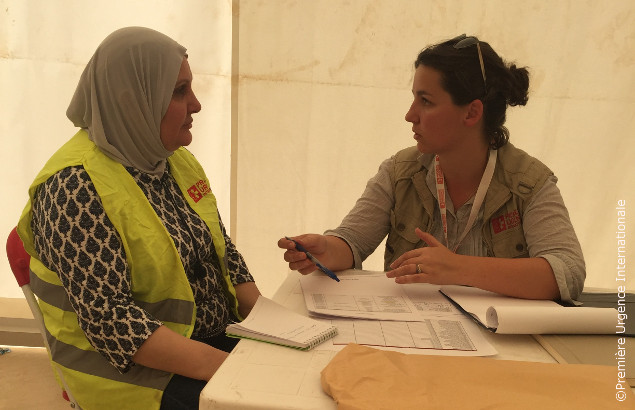 The Salamiyah camp was scheduled to open on 28 June. In the end, it was brought forward to 7 June to respond to the mass arrival of people fleeing West Mosul. The health centre was under construction and had not yet been completed, but Première Urgence Internationale teams were on site from the outset to respond to the emergency.

It is more than 40 degrees and the crowd at the entrance to the Salamiyah camp grows throughout the day. Children and adults are patiently waiting to be registered. Most of them are clutching a bag, a suitcase, or a few plastic bags, or have them slung over their shoulder. Nothing more. Their faces are lined with tiredness. Today, over 2,000 Iraqis have been received at the Salamiyah camp, located 20 km south of Mosul.  “The camp was scheduled to open on 28 June, but the authorities didn’t wait. It opened on 7 June,” explains Alex Theran, Salamiyah project coordinator for Première Urgence Internationale. The Iraqi authorities and the UNHCR decided to open the Salamiyah camp earlier than planned to respond to the urgent situation.

To the west of Mosul, fighting is continuing, and those who are caught in the crossfire and the bombing are fleeing whenever they have the opportunity to do so. A significant proportion have come to the Salamiyah camp. The new arrivals also come from the Al-Baaj district to the east of Salamiyah, which was retaken from Islamic State in early June.

EMERGENCY TREATMENT FOR THE DISPLACED PEOPLE

Infrastructure in towns and cities has been destroyed, and in addition to the fighting, residents are also fleeing because of a lack of access to water, healthcare and food. “Those who come from Mosul left as quickly as they could, bringing nothing with them. Others come from transit sites with little in the way of functional infrastructure. The camps are reaching saturation point,” says Alex.

Upon arrival at the camp, some children and vulnerable adults require emergency healthcare. “Some have empty stomachs. Others haven’t taken their diabetes medication in days and some pregnant women need emergency consultations,” the project coordinator explains.

Première Urgence Internationale was asked to build and manage a health centre within the camp, and the team began holding medical consultations within hours of the camp opening. “Our health centre wasn’t entirely ready, but we did everything we could. We mobilised nurses and doctors. We set up a tent and began consultations very quickly,” Alex remembers. Every day, the team carries out 500 consultations. A week ago, 1,300 patients were examined on the same day. “In the last few weeks, the situation in the camp has been extreme. There are a lot of people arriving each day, and they’re suffering greatly,” explains Alex.

The health centre opens its doors on 28 June and will be capable of welcoming between 1,000 and 2,000 patients per day. 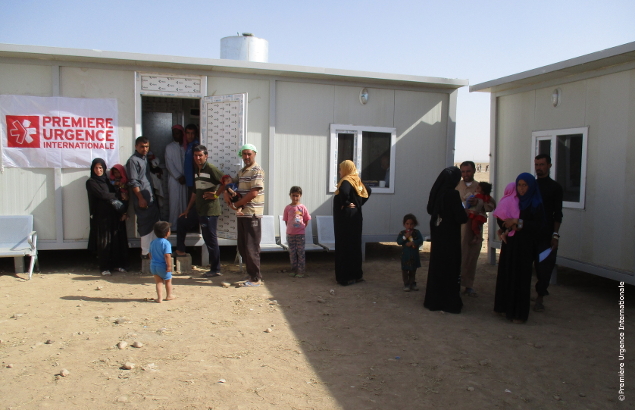