By continuing to use this site, you agree to the use of cookies. Cookies are used to suggest information based on your browsing patterns and to provide us with information about site usage. For more information and to manage these settings, click here
Home > News > Rehabilitating quarters, reconstructing lives

Some Internally Displaced Persons and Syrian Refugees are deciding to return home. Unfortunately the scars of the crisis are often deeply marking their neighborhoods. Première Urgence Internationale is working in ten governorates of Syria, implementing an area based Integrated strategy to make their reintegration easier. Hani Bitar, in charge of the Homs / Hama base, explains.

“When People go back home, sometimes they find that everything has gone. They are distraught to come back to streets in ruins, where they do not feel safe. As Première Urgence Internationale, we are working in the area of Hama and Homs in the center of the country, since 2012. In order to respond the needs on comprehensive and coherent way, we decided to implement what we call “an integrated approach”.

For example, Al Taaminat is a severely affected neighborhood of Homs, where all houses were looted and most of them burnt. We carried out a needs evaluation, and started working there in 2016. Our priority was to clear the rubble to clean up the streets and make them passable. Once this work completed, we rehabilitated nearly 400 homes.

Anticipating the obvious education needs, we rehabilitated, the school where now more than 500 pupils are studying. The inhabitants felt able to reclaim their streets, restart their businesses -some of them through our support thanks to Small Business Grants – and interact with the closest neighborhood of Kussur and Bayada that also benefited from similar interventions from Première Urgence Internationale. They had taken an important step. 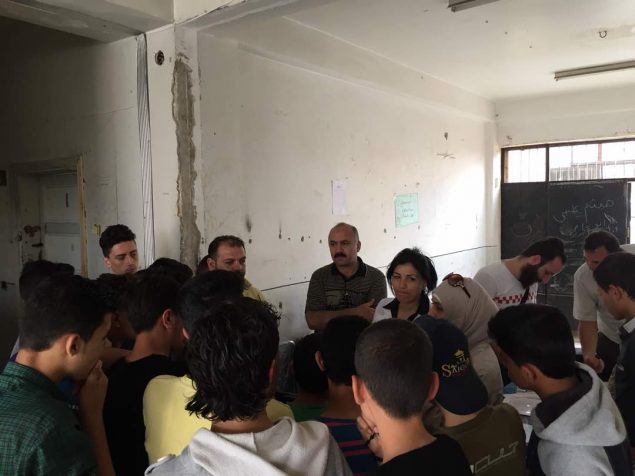 We are lucky to have really good teams in Syria, highly skilled in different sectors like engineering, education and livelihood. Our aim is to respond the needs of the most vulnerable segments of our society, in very different locations while maintaining a high quality response. We now feel that we have helped people to return to a life that looks a little like the one they left behind.

10,000 people to return home in the coming months

We are now witnessing the return of many internally displaced persons and foreseeing the return of a large number of Syrians who moved to neighboring countries such as Lebanon or Jordan because of the crisis.

Due to the evolution of the context, we are expecting more than 10,000 people to return home in the coming months. We must be ready to support them in their re-integration, to rebuilt their life with dignity and reduce their dependence on humanitarian aid. Needs are quite considerable.”