By continuing to use this site, you agree to the use of cookies. Cookies are used to suggest information based on your browsing patterns and to provide us with information about site usage. For more information and to manage these settings, click here
Home > Bangladesh > “Refugee in Bangladesh, I’m waiting to go back to my country”

“Refugee in Bangladesh, I’m waiting to go back to my country”

“Myanmar is our home”

As the 725,000 refugees who have arrived since August 2017, Fatema and her family were forced to leave Myanmar and fled to the nearest country, Bangladesh.

Bangladesh is currently hosting one of the most complex refugee crises in the world: the “Rohingya crisis”. This Muslim ethnic group which resides in the state of Rakhine, Myanmar, is denied citizenship under the 1982 Myanmar nationality law.

“Before coming in Bangladesh, we were living respectfully in our country with my whole family and all our relatives. I worked as a volunteer for a NGO in my country.”

After the escalation of violence that occurred in Myanmar, Fatema came to Bangladesh with her daughters to save their lifes. Her husband died during hostilities, killed by the military.

“Our life was perfect and we were very happy but, after influx, everything changed very terribly.” 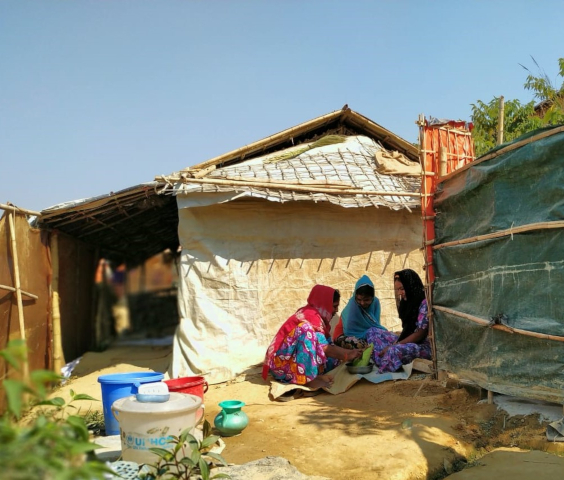 Life in a camp in Bangladesh

Fatema and her two daughters arrived in Bangladesh in September 2018, along with other people from their own community. They walked for nearly 10 days to reach the country.

In Bangladesh, they live in the Kutupalong camp, in the Cox’s Bazar district, which has become the biggest refugee camp in the world.

The pace of new arrivals has brought about one of the fastest growing refugee crisis. It resulted in settlements with the highest concentrations of refugees in the world. Moreover, the Cox’s Bazar area is comprised of local communities with high poverty rates that have also been greatly impacted by the refugee crisis.

When Fatema arrived, she obtained a shelter in Camp 12, in Moynaghuna: “In the camp, environment was okay but I saw everyone was shocked and restless all around. All the people of my camp were worried because most of them lost their family members and relatives. They were all clueless and so did I concerning what was going to happen to us. We all were given shelters by the authorities but we felt like homeless. I was very worried about my family: how could I survive with my two daughters without my husband?”

After a few days, she had the opportunity to work with an organization, as a volunteer, and was able to take care of her daughters and herself. For nearly five months, from September to January, they lived in Camp 12 with their family and relatives.

A return to independence for a refugee in Bangladesh

In January 2019, on government orders, the Bangladeshi army planned to build a road on the camp. People from the block where Fatema and her daughters were living had to be rehoused. Thus, the relocation of families living in the block was organized from Camp 12 to Camp 20 in Balukhali 2:

“Now, I have a stable job and I am still representative of the women from my block. I am happily living with my family and this job is offering us safety and dignity. Bangladesh is not my country though I am very thankful that in our miserable condition we got shelters and security. I want to get my daughters married in respectful families.”

“My last hope is to go back to my country and find safety, dignity and nationality there.”