By continuing to use this site, you agree to the use of cookies. Cookies are used to suggest information based on your browsing patterns and to provide us with information about site usage. For more information and to manage these settings, click here
Home > News > In Afghanistan, one of our teams victim of an explosive attack

In Afghanistan, one of our teams victim of an explosive attack

On Sunday, 5th May, a vehicle carrying five staff members from one of our mobile health teams was attacked with explosives. The driver sadly succombed to his injuries. All of our five colleagues were injured in the attack. Première Urgence Internationale, which is intervening in Afghanistan since 1979, strongly condemns this serious attack. 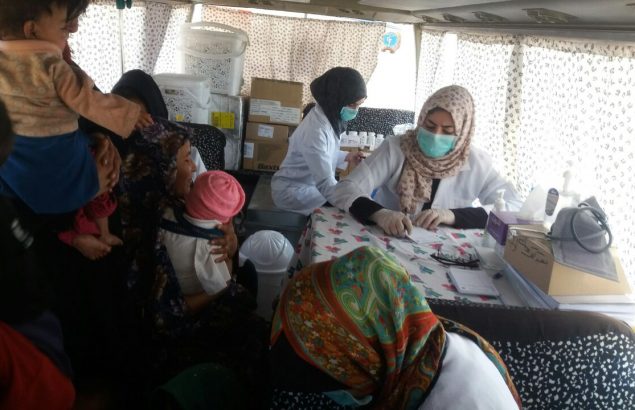 A mobile health team of Première Urgence Internationale, in Afghanistan, 2018.

Première Urgence Internationale teams were shocked and deeply saddened to learn of the attack which affected some of its teams in Afghanistan. On Sunday, 5th May, in Surkhrord District, Nangharhar province, a vehicle carrying six people from one of our mobile health teams was attacked with explosives.

The humanitarian team, on its way to provide necessary health care to the local community, was hit by a MIED (Magnetic Improvised Explosive Device) blast. All the passengers were injured. The clinical condition of our 5 colleagues is stable by now. However, the driver, Mr. Ali Shah son of Mohammad Hakim, sadly succombed to the injuries sustained, a few days after, in the hospital. He had been working alongside with Première Urgence Internationale since 2016. All our thoughts are with his family, friends and colleagues.

Aid workers are not a target

Première Urgence Internationale strongly condemns this attack on selfless aid professionals, who are working in the most difficult humanitarian conditions. Aid and health workers are not a target and must be able to provide aid unhindered and in safety. It is a regrettable illustration of the significant insecurity that impacts the lives of too many people in Afghanistan. It is also a sobering reminder of the risk faced by aid workers, who make sacrifices to provide life-saving assistance to vulnerable communities.

Première Urgence Internationale can only but restate its adhesion to the humanitarian principles of humanity, neutrality, impartiality and independence, and urges all stakeholders to respect and protect civilians and those who are assisting them.

All our thoughts are with the affected teams, and with their families, colleagues and friends. Première Urgence Internationale also wants to deeply thank all members of its teams in Afghanistan, who are doing an outstanding job there under difficult conditions.

To support our work and our actions, you can make a donation. Your donations ensure our freedom of action and increase our responsiveness in crisis situations.