By continuing to use this site, you agree to the use of cookies. Cookies are used to suggest information based on your browsing patterns and to provide us with information about site usage. For more information and to manage these settings, click here
Home > HR news > Humanitarian in the Middle East: an obvious choice for Ahed Al Ezzo

Humanitarian in the Middle East: an obvious choice for Ahed Al Ezzo

Our Deputy Head of Mission for Support in Syria has been working for Première Urgence Internationale since 2008 on missions in the Middle East. Originally from Syria, she has seen the consequences of wars and crisis in the region with her own eyes. Working in the humanitarian field was therefore, an obvious choice for her. 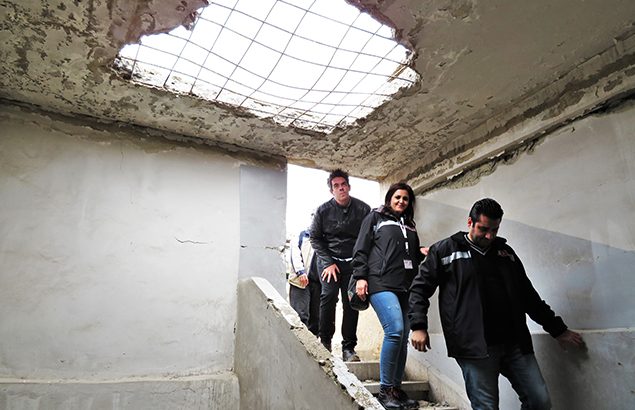 
Ahed Al Ezzo was a bank employee in Syria at the time of the second Gulf War (which began in 2003). She saw how the lives of thousands of people can change overnight. This event proved to be eye-opening.

“International non-governmental organisations did not exist in Syria before that. When the Iraqi crisis happened, we started to think about ways to help people. The war in Iraq affected Syria a lot because they are neighbouring countries. It really was a terrible war“, explains the Deputy Head of Mission for Support, she adds: “I asked myself: how can a stable country, without problems, rich, with access to education, fall into such a situation? I saw thousands of people arriving with no money, nothing… These events pushed me to work in the humanitarian field.”

Multilingual, having studied economics and eager to work with an international organisation to discover new cultures, Ahed Al Ezzo dived into the Première Urgence Internationale adventure.

“An NGO Head of Mission came for the opening of the Syria mission and was looking for people to help him prepare documents for the opening (translating documents from Arabic, etc.). I applied and went through the recruitment process, that is how I got hired as an Administrative and Financial Officer“, she says.

Until 2013, she divided her time between Lebanon, where her husband lives, and Syria. A complicated situation as the Syrian conflict had been raging for two years.

“2013 was a very difficult year. In addition to the Syrian crisis and all the problems it lead to, the war started. I was very tired of daily explosions. That’s why the Head of Mission suggested to Première Urgence Internationale headquarters that I become an expatriate in another country and the NGO offered me the position of Logistics, Administration and Finance Coordinator at the Iraq mission based in Jordan, which I accepted“, recalls Ahed Al Ezzo.

During these years, she held multiple positions in finances and logistics until she reached her current position which she has held since 2017. The different missions led her to live in Syria, Jordan and Lebanon where she still resides today.

Within the Syria mission, four departments are under her direction: Logistics, Human Resources, Finance and Administration as well as Compliance.

The beginning of the week is punctuated by videoconference calls with the various heads of units to organise the following days, priorities, urgent tasks and manage daily difficulties.

“The biggest challenges we face are related to the fact that we are working in Syria where there is an economic and political crisis. The second challenge is related to the sanctions imposed on Syria. These sanctions started years ago. It takes a lot of time to deal with all this in terms of logistics and finances. Another difficulty is recruitment, because we have a big mission with a high turnover“, says Ahed Al Ezzo.

Despite the daily challenges, knowing that she is contributing to the improvement of living conditions in her country and the region is essential for her.

“Seeing your country affected by war and crisis is difficult. People have less and less means to live properly. It is a huge change in the Middle East, which is a very rich region on many levels, including historically”, she says, adding: “The important thing for me is to feel that I am participating, even a little, in improving the situation. This gives me a lot of energy and motivation.” 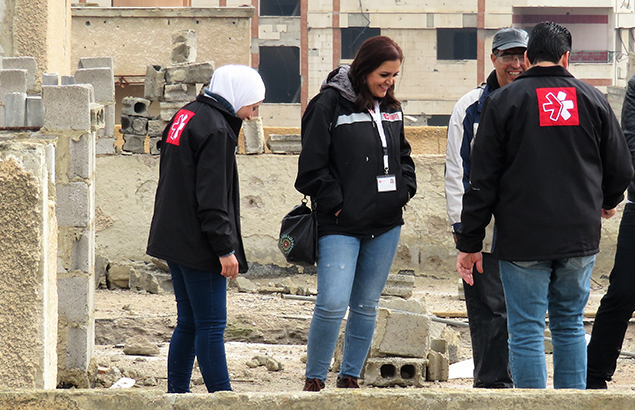 Ahed Al Ezzo tries to frequently visit the field (taking into account the new restrictions due to the COVID-19 pandemic) in the governorates where Première Urgence Internationale is active, in order to collect information on the activities herself.

“In Syria, there are about a hundred of us working on the mission, spread over eight governorates, thus some are in very remote geographical areas. But it’s very important for someone who works on the budget, the funding, the support of the mission, to see the impact of the work we are doing“, she explains.

Discussing with the teams also allows her to assess the well-being of the employees, who can confide in her more easily. All of this enables them to have “a solid mission“.

“Since I returned to the mission in 2015 the situation in Syria has deteriorated. There is no electricity anymore, no resources, it is a country under sanctions. There are not many possibilities to travel with a Syrian passport, the purchasing power is very low. People are sad, depressed and stressed“, insists Ahed Al Ezzo.

To improve this situation, she decided upon her return to the Syria mission in 2015 to allocate a specific budget to organise a retreat of a few days in Lebanon twice a year for all Syrian staff. This retreat allows the teams to relax and get away from the daily stressful atmosphere.

“We do workshops to talk about the situation and there is also a day for games and activities, dancing… The impact has been very positive. Since COVID-19 we have not been able to organise a retreat and people call me to ask when it can be held again“, she says. 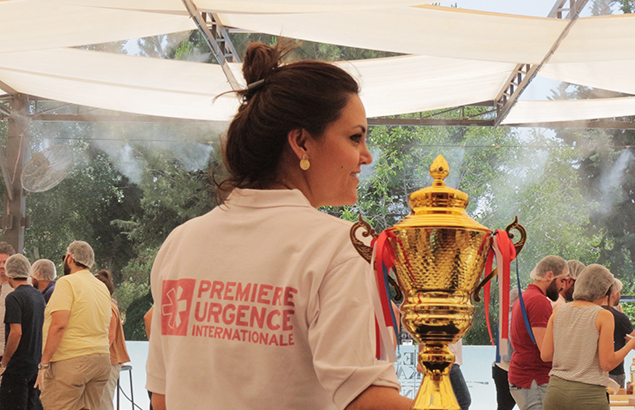 A commitment to the NGO

During her 13 years at Première Urgence Internationale, Ahed Al Ezzo has built strong ties with her colleagues and the NGO. Bonds that have made her want to stay.

“Première Urgence Internationale is an organisation where you feel you are working with a family rather than with colleagues, even with people that you do not necessarily meet face to face. Moreover, the NGO allows career development and I am an example of that as I went from being a national employee to an expatriate. I really appreciated this opportunity. ”

She also specifies having “never felt any discrimination between nationalities” and receiving “great recognition“.

One memory that will remain engraved in her mind is the 10-year anniversary of Première Urgence Internationale‘s mission in Syria in 2018. To mark the occasion, two celebrations were organised: one in Syria and one in France.

“We had a celebration at the Iris Centre in Paris with journalists. I opened the event. It moved me a lot because we brought the image of Syria to France. People from the headquarters were happy that we were celebrating and Syrians living in France also attended the conference, asked questions and we were able to exchange. It was a very important moment for me. ”

For Ahed Al Ezzo, staying for a long time in the same NGO does not limit a person’s career, it is the opposite.

“I have been able to develop my skills greatly by working with Première Urgence Internationale, especially by working in the Middle East within the Syria mission. I would like to thank the NGO because I feel appreciated, people rely on me and ask me for advice“, she concludes.

Aware of the skills she acquired with her years of experience, she now hopes to continue her career and one day become a Head of Mission in the region.

Discover the role of a Deputy Head of Missions for Programmes at Première Urgence Internationale.

Field Coordinator in Cameroon: the art of meeting challenges

Seniensou Kone is originally from Côte d’Ivoire and is Field Coordinator in Cameroon for Première Urgence Internationale. He tells us about his background, his commitment and his career development within the NGO.

Deputy head of mission: a mediator in humanitarian mission

The head of mission is sometimes supported by at deputy dedicated to support departments. The Deputy Head of Mission coordinates teams and departments in the field. Its purpose is to maximize every missions’ activities.

“Above all, a mission is the people involved in it”

Noémie D’Aout has been HR coordinator in Cameroon since August 2017. She tells us about this important role and the challenges it involves.