By continuing to use this site, you agree to the use of cookies. Cookies are used to suggest information based on your browsing patterns and to provide us with information about site usage. For more information and to manage these settings, click here
Home > News > “Dr. Shah Mahmood, your work will not be forgotten”

“Dr. Shah Mahmood, your work will not be forgotten”

In Afghanistan, our teams are grieving the loss of Doctor Shah Mahmood, a well-known and well-respected doctor who worked for almost 25 years with us, to support vulnerable populations in one of the most complex humanitarian crisis. As a tribute for his work and commitment, we honour his memory. 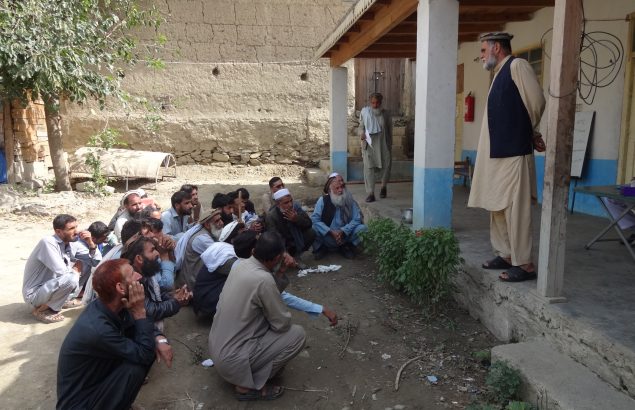 It is with great shock and deep sadness that our teams have received the news of the passing of Dr. Shah Mahmood, our Field advisor in Afghanistan’s Eastern region. He has succumbed to cancer unexpectedly sudden, after a short sickbed of about two months.

Dr. Shah Mahmood signed his first contract with Première Urgence – Aide Médicale Internationale on 1st of June 1994, evolving from health center manager, in Dangam and Asmar early in his career, to Field advisor for the whole of Kunar province later on. Sadly, with his passing, Première Urgence Internationale loses one of its oldest employees, and a vital and irreplaceable part of its institutional memory.

With us for almost 25 years

Well-known and well-respected far and wide, for almost 25 long years he negotiated humanitarian access in difficult conflict-areas; settled disputes with and within communities; and carefully built on the INGO’s strong acceptance in the region. He contributed to enhance the impact of Première Urgence Internationale’s action in Afghanistan’s historical mission. “My work consists in ensuring that our intervention is in line with the population’s needs and accepted by the community. The relations I have developed with the community leaders allow us to access the population”, Dr Shah told in April 2016 in this interview.

The loss of Dr. Shah Mahmood is felt heavily by all members of our Afghanistan team, and his long experience and caring personality will be sorely missed. We were heartened to learn that hundreds of health colleagues from the region and beyond have reached out to his family to express their shared grief.

The whole team of Première Urgence Internationale wish his family, friends, colleagues, and community strength and courage in the days ahead. His work and life will not be forgotten.